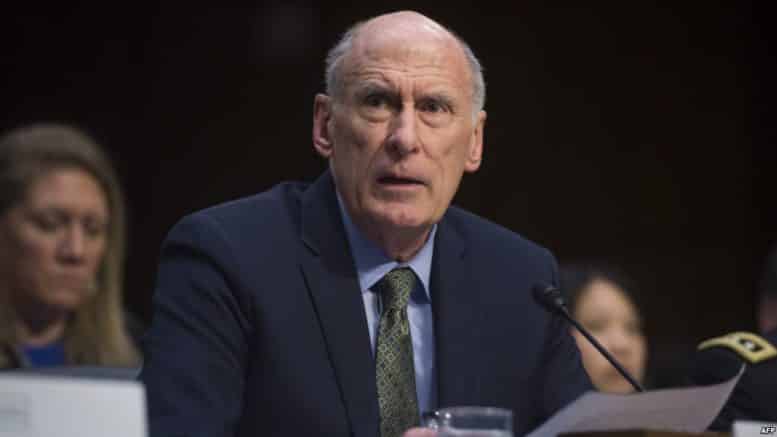 Please Share This Story!
PDF 📄
The Director of National Intelligence (DNI) says exactly what TN has been saying for three years: “The result of this effort is nothing short of a future that involves the perfection of the surveillance state” and that it “threatens the export of these tools abroad to other authoritarian regimes.” Beware of motive, however, because the DNI manages and funds all 17 Intel agencies in the U.S., including the NSA, CIA and DHS.

DNI Coats focuses on the remote Xinjiang region where China is monitoring and Muslims, but ignores the 300 million cameras already installed throughout the country. This is expected to grow to 400 million by 2020. Coupled with advanced AI, this network can track every person on a continuous basis. Coats  is correct, however in stating that “Beijing is on a path that could lead to global supremacy.” This was the late David Rockefeller’s dream when he co-founded the Trilateral Commission in 1973 with Zbigniew Brzezinski. ⁃ TN Editor

China’s growing prowess in cyberspace is a bigger, more dangerous threat to the United States than Russia’s attempt to undermine U.S. elections, Washington’s top intelligence official said, warning that Beijing is on a path that could lead to global supremacy.

Director of National Intelligence Dan Coats characterized the Chinese threat as deliberate, methodical and subtle, allowing it to escape the type of notoriety that has followed Moscow’s exploits.

Most worrisome, Coats said, is the way in which an increasingly aggressive China is taking advantage of its relative stable relationship with the U.S. and the rest of the world to hone its cyber capabilities internally.

Specifically, he cited China’s use of its ongoing crackdown on Muslims in the Xinjiang region as a testing ground for its cyber capabilities.

Intelligence officials and human rights groups estimate that China has rounded up possibly millions of Uighurs and other Muslims minorities, including families and children, sending them to re-education centers, where they are forced to renounce their religion and their culture.

But Coats said the re-education centers are just the start.

“Chinese officials in the Muslim northwest have instituted high-tech surveillance measures, including the collection of DNA and other biological data throughout the region, with Chinese technology companies at the forefront of these actions,” he told a cybersecurity conference Tuesday at The Citadel, a military college in Charleston, South Carolina.

“The result of this effort is nothing short of a future that involves the perfection of the surveillance state,” Coats warned, adding it also “threatens the export of these tools abroad to other authoritarian regimes.”

An attempt to reach officials at the Chinese Embassy in Washington for reaction to Coats’ comments went unanswered, though Chinese officials have previously sought to downplay concerns about their use of cybertechnology in Xinjiang.

One Chinese official claimed last week in Geneva that China’s use of surveillance is no more intrusive than that used by Western countries like Britain.

Coats is not the first U.S. official to warn about the threat from China, but his warning is among the most dire, and reflects a growing concern that Beijing is poised to outmaneuver the U.S. in the cyber domain.

“Do I have concerns with the Chinese? Huge concerns with regards to their ability to leverage their industry,” Defense Intelligence Agency Director Lt. Gen. Robert Ashley said last week in Washington, referencing concerns Beijing could use Chinese-made products to spy on Americans.

Already, the Pentagon has banned the sale of mobile phones by Chinese companies Huawei Technologies and ZTE on its military bases because of the potential security risks. Australia, a key U.S. intelligence partner and ally, also banned the two companies from supplying telecommunications equipment.

And military officials, like Ashley, are increasingly worried about the pervasiveness of Chinese-made components in the supply chain and the impact that could have in a range of both combat and noncombat situations.

“My bigger concern may not necessarily be what’s taking place on the battle space if I can’t turn the power on,” Ashley said.

“Imagine a world 15 or 20 years from now where our entire communications network is embedded with component pieces made by a company that can remotely control those component pieces by a foreign adversary,” Republican Sen. Marco Rubio said at a conference this past June during a speech about China. “It would be a threat this country has never faced.”

A July 2018 report by the U.S. National Counterintelligence and Security Center found that while China’s cyber operations have slowed since a 2015 agreement with the U.S., Beijing “continues to use cyber espionage to support its strategic development goals.”

Most of the Chinese operations target defense contractors and information technology, as well as communications companies “whose products and services support government and private sector networks worldwide.”

“We find them stealing our ideas, our intellectual property, trying to obtain our innovation,” Bowdich said, calling the Chinese efforts “incredibly effective.”

China is no longer “hiding its strengths and biding its time,” Coats warned Tuesday. “Beijing is working against the values that the international community has championed, including protecting personal privacy, the free flow of information and the protection of commercial secrets.”