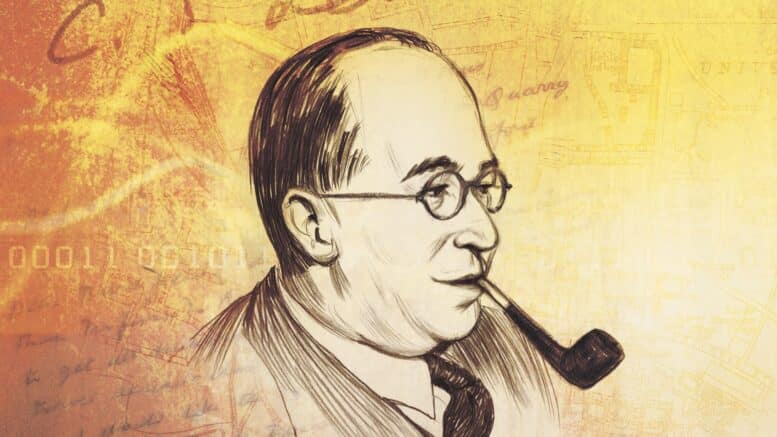 C.S. Lewis (1898-1963) wrote extensively about the destructive nature of Scientism and its inevitable consequences on society as a whole. Technocracy and Transhumanism are the twin agents Scientism that will destroy civilization. ⁃ TN Editor

M.D. Aeschliman’s The Restoration of Man: C. S. Lewis and the Continuing Case Against Scientism has recently been republished in an updated new edition by Discovery Institute Press and in French translation by Pierre Téqui in France.

Seventy-five years ago today, in that momentous year 1945, C. S. Lewis published the third and final volume in his series of three space-fiction, mythopoeic, dystopian novels, That Hideous Strength. The novels are hard to categorize and have never reached the levels of popularity of his Narnia chronicles and satirical and apologetic works, but their over-arching philosophical project entails a profound meditation on the  character of Western and world history over the previous 150 years but especially during the catastrophic, apocalyptic period 1914-1945. The novel deserves comparison with the more famous dystopias such as the Russian Evgeny Zamyatin’s We (1924), Aldous Huxley’s Brave New World (1932) and George Orwell’s 1984 (1949), and also the English Catholic-convert Msgr. R.H. Benson’s apocalyptic fantasy Lord of the World (1907); but it even merits comparisons with first-order philosophical-historical writing in the tradition of Thomas Carlyle’s The French Revolution (1839) and Alexander Solzhenitsyn’s Gulag Archipelago (1974) and with the history and philosophy of science as conveyed by Alfred North Whitehead, Pierre Duhem, and the great Hungarian refugee scholars Michael Polanyi and Stanley L. Jaki. The very width of its inter-disciplinary scope and depth of its philosophical-ethical penetration make it a hard book to categorize but are also characteristics of its  importance and power as a work of metaphysical fiction.

Himself a wounded veteran of World War I, Lewis delivered in 1943, in the middle of a second, even vaster and more destructive world war, a series of invited university lectures in the north of England that were published by Oxford University Press later that year as The Abolition of Man, a dystopian title with an innocuous-sounding, specialist subtitle, Reflections on Education with Special Reference to the Teaching of English in the Upper Forms of Schools. High claims continue to be made for this short, dense, lucid expository essay; the outstanding Oxford literary scholar A. D. Nuttall (1937-2007), author of one of the finest books of the last fifty years on Shakespeare, wrote of it: “The argument as it unfolds is dazzling. It is in a way odd that a work which so thoroughly routs whole volumes of Nietzsche and Sartre is not more widely admired, especially as the style in which it is presented is brilliantly lucid.” In Lewis’s own Preface to That Hideous Strength, he tells us that the novel is “a ‘tall story’ about devilry, though it has behind it a serious ‘point’ which I have tried to make in my Abolition of Man.” It is also a uniquely revealing “ghost story” and can be profitably read alongside the science journalist Deborah Blum’s excellent Ghost Hunters: William James and the Search for Scientific Proof of Life After Death (2006).

The novel is a narrative, fictional version of a philosophical anatomy of the satanic dimension and implication of much modern history from 1914 onwards, which Lewis himself had lived through, viscerally as a soldier, intellectually as a scholar, and vicariously as a spectator of world events and as a novelist. But unlike Brave New World, 1984, We, or Lord of the World, it also contains a benign vision of human possibility and glimpses of beatitude. It reminds one of the clairvoyant, apocalyptic psychological and metaphysical insights of Dostoevsky but also contains visions of cosmic, human, and even animal and vegetable harmony that are reminiscent of St. Francis of Assisi, Dante, Spenser, Shakespeare’s late romances, Blake, Tolstoy, and G. K. Chesterton’s The Man Who Was Thursday. Albert Schweitzer’s “reverence for life” and the pious, imaginative ecology of Wendell Berry are more recent examples.

But “if a way to the better there be, it exacts a full look at the worst.” For Lewis, the great modern apostasy that had led to the 20th-century Armageddons had taken place in the late 19th century with the marriage of Darwinian and Nietzschean thinking that simultaneously produced a calamitous decline in religious-humanist belief in Natural-Law theism and an enormous increase in post-moral cynicism and ruthlessness in the writings of Nietzsche and the emergent ideology of Social Darwinism, whether in its nationalist-fascist-militarist form, a so-called “scientific-socialist” Communist form, or in the less fully organized competitive-capitalist form. In 1992 the literary critic John Carey published The Intellectuals and the Masses: Pride and Prejudice among the Literary Intelligentsia, 1880-1939, in which he argued that during this whole period in the British Isles only two major writers withstood the glamorous, radically “enlightened” appeal of Nietzsche: G. K. Chesterton and Arnold Bennett. Lewis may well be seen as a disciple of Chesterton, and like him he felt the seismic shift of consciousness away from the often-contested but durable Judaeo-Christian Natural-Law tradition of figures such as Samuel Johnson, Burke, Jane Austen, Dickens, Abraham Lincoln, Frederick Douglass, Lord Acton, and William Jennings Bryan.

A.D. Nuttall astonishingly argues that Lewis’s short philosophical treatise The Abolition of Man “routs whole volumes of Nietzsche and Sartre,” but that its very lucidity has put modern intellectuals off and led to its undervaluation. That Hideous Strength attempts to give a vivid narrative picture of how the gigantically potent Darwinian-Nietzschean heresy actually works out in practice, something that Lewis felt was truly evident during the decades of his life up to 1945. In an anti-reductionist 1972 essay on Blake, the combative Cambridge moralist and literary critic F. R. Leavis pointed out that “Though we have to recognize that Darwin’s life testifies to the existence of intelligence and purpose, his theory of evolution offered to dispense with the need for these words” (emphasis added).

Lewis’s novel conveys the idea that the human person is inevitably, almost gravitationally, drawn to some conception of ultimate worth and significance. “The difficulty that ensues,” G. K. Chesterton epigrammatically put it, “when people cease to believe in God is not that they believe in nothing, but that they believe in anything.” The clairvoyant Dostoevsky saw that the destruction of the orthodox belief in the God-man Jesus Christ led to new divination and deification, the pursuit and celebration of the man-god, “homo deus,” foreshadowed by the Marquis de Sade and Max Stirner and Ralph Waldo Emerson, and fully articulate in Nietzsche’s conception of the post-moral “Superman.” It could take nationalist, racialist, imperialist, utilitarian, or Promethean-proletarian forms, or eventuate in a simple but thoroughgoing hedonistic egotism as in the Marquis de Sade and Stirner; but some assumption or assertion of ultimate worth or value, for individuals or groups — nations, races, classes — is inevitable. Language and conceptualization themselves assume or entail it.

In a brilliant pre-World War I essay “On Reading,” Chesterton had intuitively discerned the depth of the Nietzschean threat (so alluring to his friend George Bernard Shaw) and had compared Nietzsche’s celebratory, histrionic immoralism to Shakespeare’s depiction of the iniquity of the usurper Richard III in his play: what the incipiently mad egotist Nietzsche praised and celebrated, the orthodox Christian Shakespeare deplored and condemned. Suffering nightmares about his own murders, Richard tries to steel himself and his followers:

Let not our babbling dreams affright our souls.
Conscience is but a word that cowards use,
Devised at first to keep the strong in awe.
Our strong arms be our conscience; swords, our law.

“Souls” is of course ironic, as Richard does not believe in the soul at all, but only in the will. Richard is a cynical nominalist — “Conscience is but a word…”

The skeptical, nominalist thinking of Hume (“a brilliant sophist” — G. E. M. Anscombe) and the French philosophes in the 18th century stripped the emerging natural sciences of their fiduciary rational core, creating a radically reductionist positivism that, as the distinguished contemporary Polish philosopher Leszek Kolakowski (1927-2009) put it, “renounces the transcendental meaning of truth and reduces [even] logical values to features of biological behavior.” In his history of positivist thought, The Alienation of Reason, Kolakowski entitles one chapter “The Destructive Consequences of Hume’s Work.”

The late 19th-century marriage of the sub-rational and sub-moral Darwinian idea of “survival of the fittest” and Nietzsche’s idea of the post-moral will to power produced a predatory mindset that had much to do with the sanguinary tragedies of the century to follow and our own time, as a large scholarly literature has shown. (Fine recent examples are Richard Weikart’s From Darwin to Hitler (2004) and Yvonne Sherratt’s Hitler’s Philosophers (2013).)  Sherratt notes that Nietzsche’s “infamous work Zarathustra, in which he had coined the idea of the ‘Superman,’ was printed in 150,000 copies during the First World War, and handed out to German soldiers at the front.”

Lewis’s Abolition of Man is not a theological work, but a metaphysical argument, a “brilliantly lucid” philosophical treatise defending “the perennial philosophy.” But That Hideous Strength is simultaneously a science-fiction, mythopoeic, and theological work, with roots in and affinities to Biblical apocalyptic literature, The Odyssey, Dante’s Comedy, Milton’s Paradise Lost, Swift’s Gulliver’s Travels, and the transcendental visions of William Blake, most luminously in his 1803 “Auguries of Innocence.” A key passage for both Blake’s visionary poems and Lewis’s visionary novels is St. Paul’s assertion in the Epistle to the Ephesians: “It is not against flesh and blood that we [fight]; we have to do with princedoms and powers, with those who have mastery of the world in these dark days, with malign influences in an order higher than ours” (Eph. 6:12, tr. Ronald Knox). Blake’s late visions are often disappointingly intermittent and obscure, but he was clear in believing that “The strongest poison ever known comes from Caesar’s laurel crown.” The pursuit of power, without virtue, condemned by Christian thinkers such as St. Paul and St. Augustine as the “libido dominandi,” becomes the “enlightened” modern will-to-power of Nietzsche and his legion of admirers and disciples, including H. L. Mencken, Clarence Darrow, Emma Goldman, and Justice Oliver Wendell Holmes in the USA. Power without goodness, mental and physical force without ethics or justice, is “that hideous strength.”

“Malign influences in an order higher than ours” are depicted in That Hideous Strength. The force connecting humans with these transcendental influences is ideological or philosophical — by voluntarily opening themselves mentally to post-moral idols of power the intellectuals of the new technocracy, nowadays called “post-humanists” or “transhumanists,” enter truly “trans-human” realms of conceptual and existential reality. Less consciously than Marlowe’s Dr. Faustus, Lewis’s “new class” of scientific-political “conditioners” collaborate with ferocious, predatory potencies in the universe. Even the popular contemporary futurist Yuval Harari worries today about “unleashing new post-humanist technologies” (Homo Deus, 2016). Lewis argued the point with particular brilliance in chapter three of The Abolition of Man in 1943.

That was a super read. Thanks for posting this!

Atheism ultimately craves complete oblivion – and complete oblivion is its ultimate promise. However, while life exists here on Earth true oblivion – with no time, no matter, no love, no hate, with nothing existing or ever having existed – can never be possible.
They want a black and vacuumed nothingness with no choice between good and evil.
Atheistic scientists pose a clear and present danger to all life on Earth but especially to humans.

C.S. Lewis was in the occult. https://www.crossroad.to/heaven/Excerpts/warnings.htm In the secular world C.S. Lewis is well loved. That should give us a clue. Bono of U2 for example who is a wicked man: https://www.u2interference.com/15276-the-screwtape-songs-bono-c-s-lewis-and-zoo-era-u2/

The interconnection of Bono, Soros, and Gates: https://www.worldtribune.com/u2s-bono-beautiful-day-to-advocate-for-the-globalist-culture-of-death/ and here: https://en.wikipedia.org/wiki/One_Campaign