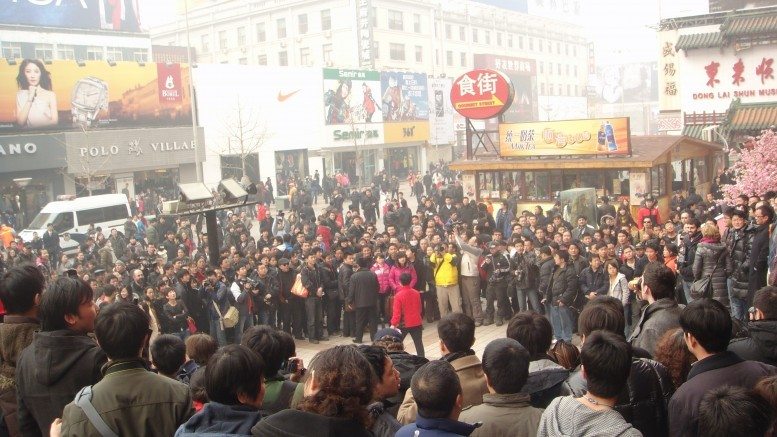 China’s totalitarian regime recently banned original news reporting over the Internet, but this was only one part of a massive crackdown on dissent that rivals the 1989 Tiananmen Square massacre. Technocracy is not Communism, but is even more repressive. ⁃ TN Editor

In one of his last interviews before he was detained by Chinese police, Meng Han appeared relaxed as he talked about his work as a labour activist.

“Our most important work is to help factory workers organise themselves so they can defend their rights,” he told the Financial Times last year. “The government rarely helps the workers. But as long as the workers don’t go to extremes, it will stay neutral.”

At the beginning of 2015, Mr Meng could feel reasonably confident that he inhabited, in the context of China’s rapidly evolving civil society, a relatively safe sphere. Labour activists, rights lawyers and academics believed that, so long as they did not challenge the ruling Communist party, they could operate without fear of official retribution.

Today, however, Mr Meng is spending his eighth month in a detention centre. He awaits trial on charges of “disrupting public order”, an offense that carries a maximum sentence of five years in prison. This month also marks the one-year anniversary of the round-up of dozens of rights lawyers. Most have since been released but the most prominent among them have been formally accused of state subversion — a charge punishable by life in prison.

The chill that has descended across Chinese civil society, especially over the past 12 months, has become one of the defining aspects of Xi Jinping’s presidency, alongside his own rapid consolidation of power over the party, government and military. As China’s most powerful party and state leader since Deng Xiaoping, Mr Xi has presided over a crackdown without precedent since the repression that followed the 1989Tiananmen Square massacre.

Even academics and businessmen who thought themselves immune to politics provided they did not wade into sensitive areas are having to reassess their vulnerability.

Very important article to see what is eventually planned for all of us. Thank you, Mr. Wood. Incidentally, I see that Russia is also going down this path of squashing dissent with two Russian citizens recently sentenced to serve a number years in Siberia for online criticism of the Kremlin, no threats or calls for an uprising, simple criticism from what I read. Oddly, last year Russian officials prosecuted Jehovah Witnesses for practicing an “authorized religion” using anti-extremist laws. Hindu is fine, Islam fine, etc., but not Jehovah Witnesses (who seem to harbor deep suspicions about the trends of modern… Read more »