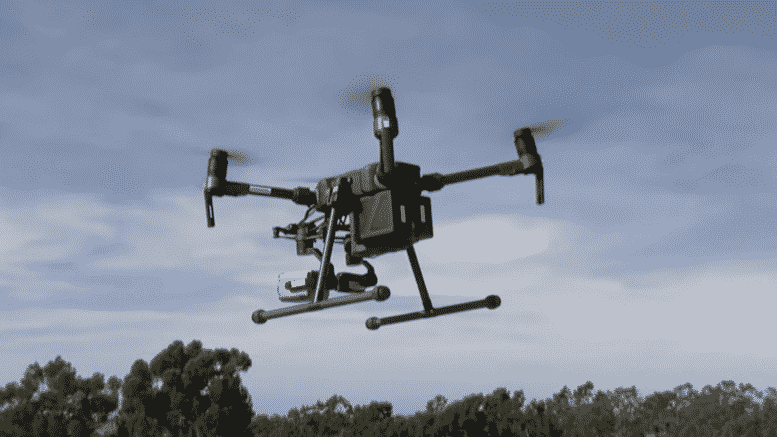 Please Share This Story!
PDF 📄
The Department of Homeland Security has coordinated with drone makers to turn Chula Vista, California into the first totally surveilled city in America; and it is a dangerous precedent. Technocracy demands total surveillance in order to control the “machine” of society. Citizens should demand that their own city councils block this assault on liberty. ⁃ TN Editor

This story should serve as a warning to everyone: police are lying about only using drones to cover emergency calls.

Red flags should have been going up all across the country when the Chula Vista Police Department announced that it took them only three years to have their drones cover one hundred percent of the city.

“Since 2018, the Chula Vista Police Department has been able to deploy drones as first responders (DFR) for select law enforcement situations. In August 2019, the program was expanded to cover 33% of the city’s area.”

By March 2021, the Chula Vista Police Departments’ drones covered 100 percent of the city.

Chula Vista Police Chief Roxana Kennedy claimed that one of the main advantages of using drones to cover the entire city is to ‘help to de-escalate otherwise unknown situations.’

“Officers have the ability then to see, ‘Is this an armed individual? Is this just someone pacing in the street? Do I really need to respond into the area or would it be better for me to stay back?'” Kennedy said.

Keep in mind that this is the same police chief who claimed she didn’t know her department was sharing license plate reader information with Immigrations and Customs Enforcement.

One of the fist warning signs that went unheeded was a promise made by the Chula Vista Police Department four years ago to only use drones for so-called emergencies. They are now using drones to respond to thousands of ‘unknown situations’ or non-emergency calls based on the premise that a person could be armed.

During the pandemic, the Chula Vista police used drones to respond to 5,400 calls.

“To date, the Chula Vista Police Department said its DFR program has responded to over 5,400 calls for service and the drone was the first on-scene to over 2,500 incidents.”

As Chula Vista Today reported, it has taken only one more year for the police department to use drones to respond to five thousand more calls.

“The DFR program has responded to many calls for service, such as finding missing children, riot calls, fires, traffic, vehicular accidents, domestic violence, and weapons emergencies, according to Lt. Miriam Foxx.”

Take a moment to digest how many innocent people the police drone program is actually spying on.

Let’s say that every home has 2-4 people in it and every street has 4-6 vehicles on it with at least one driver in it. Taking it one step further, let’s assume that a single police drone flies over a minimum of 20 homes. The rough math means that at a minimum Chula Vista’s police drones have spied on between 400,000 – 600,000 people in a few short years. And those numbers do not include pedestrians or bicyclists, which would put the number of innocent people police are spying on even higher.

A city known primarily for Sesame Place and a marina are celebrating police using drones over ten thousand times to respond to riot and domestic violence calls. What is wrong with this picture?

“About 30 percent of those calls were related to some type of disturbance and about 17 percent of the time, drone pilots were able to clear a call without ground units responding (e.g., the subjects were gone), thereby keeping officers free for higher priority calls.”

The article also revealed who is behind police drone programs.

“Today, the Federal Aviation Administration, City of Chula Vista, City of San Diego, San Diego Regional EDC and Cape announced the launch of a test program to deploy drones for proactive public safety operations by the Chula Vista Police Department. This project has been made possible through the FAA’s Unmanned Aerial Systems Integrated Pilot Program (IPP).”

“As the police use more drones, they could collect and store more video of life in the city, which could remove any expectation of privacy once you leave the home.”

Chula Vista police sergeant James Horst showed how with the press of a button he could instruct an automated drone to follow a particular person or vehicle on its own without them ever knowing.

Police in Texas, Utah and California use drones to spy on suspicious people, track and arrest juveniles suspected of committing a crime and to spy on concertgoers.

According to the Voice of San Diego police in Tijuana, Mexico were so inspired by the Chula Vista police drone program that they decided to launch their own drone program.

“Inspired by Chula Vista’s use of technology, Tijuana is deploying police drones. But one of the key differences between the two programs is that Tijuana uses drones on occasion to proactively monitor public space in the financial district, tourist zones and elsewhere.”

And police in Asia are putting surveillance drones on smart street light poles.

According to AJU Daily, police in Seoul, South Korea are using smart poles equipped with drones to ticket people for illegal parking.

“Seoul City has started the demonstration of two smart poles equipped with surveillance drones for the first time in the country. The drones will monitor illegal parking and traffic congestion. Smart poles will provide a charging station for drones. The all-in-one smart pole is integrated with various equipment such as a CCTV camera, WiFi router, drone station and IoT sensors.”

These are the same drones that U.S. Customs and Border Patrol (CBP) uses along the Mexican border.

“The companies say their autonomous drones are already being used by the CBP at the Mexican border, as well as by and Israeli Defense Force along the border at the Gaza Strip in Israel. They said they had six contracts with the U.S. Air Force for their drones.”

BWR CEO Ben Alfi said, they are calling it the Soteria Project, from the Greek word meaning “deliverance from a crisis.” Alfi said their goal was to put “an eye in the sky in zero time to enhance security across New York.”

The only ones needing to be ‘delivered from a crisis’ will be the 19.4 million New Yorkers being surveilled by NYPD police drones flying from city rooftops.

Using drones to surveil suspicious people or potentially armed people, to launching police drones from city rooftops. It appears that DHS and Big Tech are well on their way to creating a national public surveillance drone program.

Ten thousand police drone calls will become the norm in cities everywhere if we continue to allow police to break their promises about ONLY using drones to respond to emergency calls.

This town needs to use these ILLEGAL things as Target Practice.

This article is nothing but hogwash. What these spreaders of misinformation fail to tell you, is that the drones are only used to respond to actual calls for service. They do not just fly around and surveil the community. The drones are only deployed to respond to calls. When they are finished with the mission the return home. These drones have allowed the department to determine what is going on before an officer arrives on scene. This means that the drone operators can then determine how many officers are needed and place back in service those that do not need… Read more »

Thank you for the standard industry troll response to imply that the drones don’t anything else other than identify and take pictures of the perp. No innocent bystanders. No houses or streets on the way there or back. No license plates of cars on the street. And the San Diego Life article doesn’t really say that “The City of San Diego’s Homeland Security Department is collaborating with more than 20 regional organizations to implement the IPP. In addition to EDC, partners include: City of Chula Vista, Cape, AirMap, Qualcomm, AT&T, California Governor’s Military Council, California Governor’s Office of Business and… Read more »