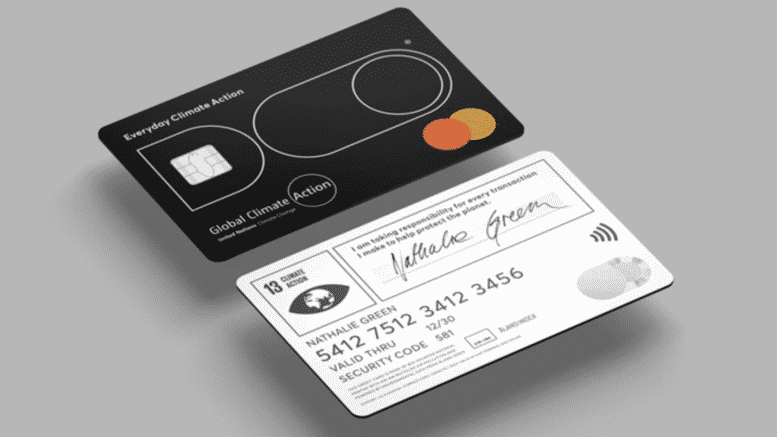 Please Share This Story!
PDF 📄
Doconomy’s vision is Technocracy’s first-born as their website states: “Our understanding of impact is reshaping all commercial activity on earth.” Your life will be data-mined for carbon footprint and your Mastercard will stop working when you exceed the CO2 limit they set for you. ⁃ TN Editor

The company that created a credit card to track your purchases’ CO2 emissions is set to launch a “premium” version of the card that cuts off your spending as soon as you hit your “carbon max.”

This is the latest of many schemes to force major changes in human behaviour to allegedly lessen global warming. Social scientist and author Steven Mosher has called the global warming movement a “giant propaganda effort” and “the biggest scientific fraud ever perpetrated on the family of man.”

Doconomy has partnered with Mastercard and the United Nations Framework Convention on Climate Change (UNFCCC) to create technology for the everyday consumer that “connects the purchase price of a product with the effect on the planet measured in Kg CO2, and then recommends the amount to offset – practically putting a price on carbon,” as the Doconomy website explains.

The DO credit card works hand-in-hand with a phone app, launched in April 2019, that quantifies the CO₂ emissions generated from each credit card transaction. The website introduces the card with video footage of whitewashed, typical consumer goods floating, like trash, as if through space, each labeled with a carbon emissions number.

The back of the card reads underneath the signature authorization area, “I’m taking responsibility for every transaction I make to help protect our planet.”

Doconomy will soon release a “premium” version of the credit card, called DO Black, touting it as “the first credit card ever to stop you from overspending.”

Measured against the UN goal of cutting carbon emissions in half by 2030, DO Black “comes with a monthly tCO2e limit, ensuring that we stick to the UN-2030-recommended cuts in carbon,” the website reads.

“Instead of introducing a premium credit card with benefits that typically encourages further consumption, Do Black only has one essential feature – a carbon limit. The core purpose is the ability, not only to measure the impact of your consumption, but also to bring it to a direct halt,” the company stated.

The website currently features a sneak peek of the message the card user will be met with as soon as they hit their carbon max, complete with a red exclamation point warning: “Transaction denied! Carbon limit reached.”

Nathalie Green, the CEO and co-founder of Doconomy, views the card as a critical need: “We all need to come to terms with the urgency of the situation and rapidly move towards more responsible consumption. With Do Black there is no more excuses. Through our collaboration with UNFCCC and Mastercard, Do will enable people to do their part to contribute to the carbon reduction goals of 2030 and onwards,” she

The company revealed that they have partnered with the UN to participate in five “carbon dioxide reducing efforts,” or CO2 “offset” projects. Doconomy’s “climate smart savings account” also currently has a half-percent interest rate where “0.4 goes to our economy and 0.1 goes to the planet,” as “compensation” for the carbon impact.

As a company, Doconomy doesn’t limit itself to the creation of the DO credit cards but provides tools, using their “Åland Index,” to help other financial service providers and companies assess the “climate impact” of digital financial transactions, particular products, and even entire personal “lifestyles.”

Their goal is ambitious: “bring about structural change by rewiring the financial system,” as their website reads. Their services are already being used by the bank Klarna, which is providing “carbon impact calculations on all transactions by all users” through Doconomy’s Åland Index. This is being described as “the largest initiative ever taken by a bank in educating its users on the impact of consumption.”

While the card is currently being advertised for voluntary use, Marc Morano, founder and executive editor of what leftists call the “climate change denial” website Climate Depot, has predicted that this voluntary phase will have its own expiration date:

“This CO2 monitoring credit card will begin as a ‘voluntary’ measure with no ‘mandate.’ But how long until this CO2 card will be mandated by big corporations in collusion with governments? Given how the climate activists are aping the COVID lockdowns, expect this credit card to be mandatory under a ‘climate emergency.’”

>>This CO2 monitoring credit card will begin as a ‘voluntary’ measure with no ‘mandate’.
I’m sure it is. 😉 …kind of like 2 weeks to flatten the curve.

Yep….Forwarded to my friends who use a credit/debit card for everything.

The BEST reason NOT to use credit cards. No use? No money to this/other corporate totalitarian banksters.

Result: Online purchases will slow to cease. The carbon card is simply another avenue of attack on the supply chain and the taking down of small businesses worldwide.

You’ll be living in mud huts and eating bugs! Next version of the card will go in your forearm or forehead and contain bioluminiscent luciferase injected into your bloodstream.

Free market means, No compulsion, no control unless ABSOLUTELY necessary to keep PEACE not Agenda 2030 depopulation targets. Self-interested, rational individuals will have no part of this planned society – utopia: nowhere. It’s not happening because it’s fake, false, contrived communism. We will have a segregated society between the sheep and the goats.

Thanks for the tips Patrick. I’ll make sure to never sign up for doconomy’s credit card. I’m sure the tyrants and the technocrats will eventually get around to being in total control of every credit card. Every breath we take too if the Lord permits it. As for those who are unwilling to sacrifice their immune systems for the sake of fake science. I’m sure they’ll strip us down to our underwear the first chance they get minus divine intervention on our part.

This is just the introduction of the idea. And one can opt out. But the international vaccine passport is something governments and banks want to require. The mandatory passport/ID will then be linked to a central bank digital currency account. At some point all transactions will be done cashless through this account. Then the carbon limit will in effect be mandatory. Of course at that point the black market takes over.

[…] Credit Card Cuts Off Spending When You Reach Your CO2 Limit […]