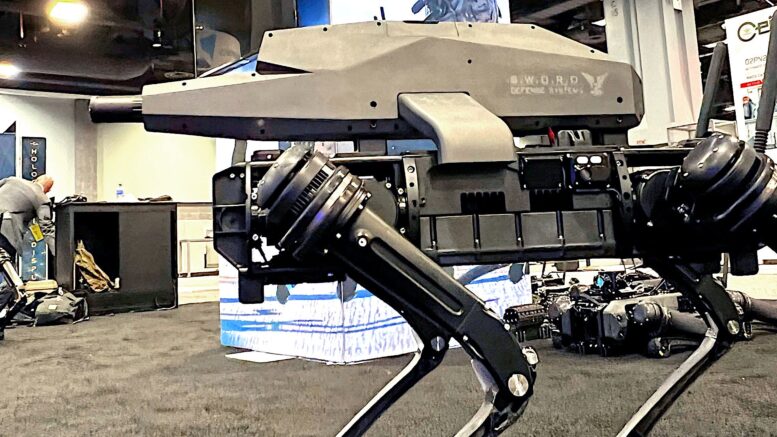 Please Share This Story!
PDF 📄
The government wants your guns but has no problem building frankengun monsters of its own. The dog pictured carries a very potent 6.5mm Creedmoor rifle, which also has a machine gun configuration. A swarm of these armed robots could overwhelm and slaughter dozens of combatants in minutes. ⁃ TN Editor

Ghost Robotics and SWORD International have teamed up to create a rifle-toting “robot dog.” Called the Special Purpose Unmanned Rifle, or SPUR, the system adds a 6.5mm Creedmoor rifle from SWORD to one of Ghost Robotics’ quadrupedal unmanned ground vehicles, or Q-UGVs.

The SPUR made its debut on the show floor at the Association of the U.S. Army’s (AUSA) main annual convention in Washington, D.C., which opened yesterday. Though Ghost Robotics is partnered with a number of other companies to explore defense and security applications, among others, for its Q-UGVs — which you can read more about in this past War Zone feature — this appears to be the first example of one of these unmanned systems with an actual weapon mounted on it. Unarmed examples of the Q-UGV are notably already in limited use with the U.S. Air Force’s 325th Security Forces Squadron at Tyndall Air Force Base in Florida and are being tested by other units within that service.

The exact configuration of the 6.5mm gun inside the SPUR module — how much ammunition it contains, and how hard it might be to reload — are all unclear. A product card for SPUR that emerged during the AUSA show can be instructed remotely to chamber the first round from an unloaded state, as well as clear the chamber and safe the gun.

In terms of the weapon itself, SWORD does offer derivatives of the 5.56x45mm AR-15/M16 family, as well as similar, but larger caliber guns, more akin to the Armalite AR-10 or Knights Armament Company SR-25. Those rifles come in calibers such as 7.62x51mm, 6.5mm Creedmoor, .300 Norma Magnum, .338 Lapua Magnum, and .338 Norma Magnum. The weapon used in the SPUR module looks like it could have a sound suppressor fitted to the front end, which could make it more difficult for opponents to determine where the shooting might be coming from.

The 6.5mm Creedmoor is not currently in any kind of widespread use by the military or other security forces, either in the United States or elsewhere around the world. However, U.S. Special Operations Command is notably in the process of acquiring light machine guns and rifles in this caliber, ostensibly to fill an intermediate niche in overall performance between existing 5.56x45mm and 7.62x51mm guns, as you can read more about here. Testing has shown that this 6.5mm round actually offers increased range over the various 7.62x51mm cartridges that are available to the U.S. special operations community now.

I would hope that EVERYONE is studying these KILLER ROBOTS, so that when they ARE ATTACKING US (SHOOTING at us), we will KNOW how to ‘take them out’?! Then we’ll need to ‘capture’ them (since WE OWN THEM…..via OUR Tax $$$), re-program them to ATTACK those who had ‘sicked’ them on US!

Excellent point. If things get so bad in the USA and we are forced to deal with such apparatuses we must become the Spec Ops of humanity.

elle
Reply to  A b