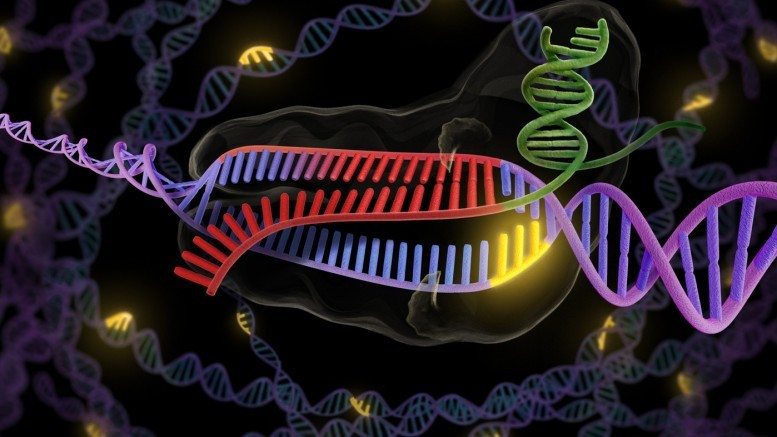 Posted By: Michael Nevradakis, Ph.D. via The Defender October 26, 2022

Please Share This Story!
PDF 📄
The notion of cut-and-paste techniques for genomic editing is euphoric to the Transhuman/Technocrat world. “Why, we can edit anything, so why not do it?” The very question holds the answer, that is, there are no moral or ethical boundaries to constrain them. They have openly stated that the goal is to take over evolution and re-create the world in their own image. ⁃ TN Editor

CRISPR, a recently developed gene-editing technology is promoted as a potential solution to numerous diseases, to food security and climate change — even as a way to deliver “designer babies” and bring extinct mammals back to life.

The technology has attracted significant investments and the attention of actors such as Bill Gates and the World Economic Forum (WEF).

But many scientists express concerns about the technology’s potential harmful effects.

In interviews with The Defender, Dr. Michael Antoniou, head of the Gene Expression and Therapy Group at King’s College London, and Claire Robinson, managing editor of GMWatch, provided insights into the flaws of this technology, its potential consequences and the risks associated with not regulating it sufficiently.

CRISPR — which stands for Clustered Regularly Interspaced Short Palindromic Repeats — acts as a “precise pair of molecular scissors that can cut a target DNA sequence, directed by a customizable guide.”

Put differently, this technology allows scientists to edit sections of DNA by “snipping” specific portions of it and replacing it with new segments. Gene editing is not a new concept, but CRISPR technology is viewed as being cheaper and more accurate.

This stems from the 2012 discovery that RNA can guide a Cas protein nuclease to any targeted DNA sequence, and to (theoretically) target only that one specific sequence. Indeed, CRISPR technology is often referred to as CRISPR-Cas9 for this reason.

The Media and many scientists have expressed optimism about the technology.

Medlineplus.gov, for instance, said CRISPR “has generated a lot of excitement in the scientific community because it is faster, cheaper, more accurate, and more efficient than other genome editing methods.”

Wired, in 2015, described CRISPR as “revolutionary,” writing that it had “already reversed mutations that cause blindness, stopped cancer cells from multiplying, and made cells impervious to the virus that causes AIDS.”

The technology also made wheat “invulnerable to killer fungi,” and altered yeast DNA “so that it consumes plant matter and excretes ethanol,” according to Wired.

In the same article, Wired wrote that “Technical details aside, CRISPR-Cas9 makes it easy, cheap, and fast to move genes around — any genes, in any living thing, from bacteria to people.”

A scientist quoted in the story added, “These are monumental moments in the history of biomedical research.”

Bloomberg, in 2016, said CRISPR will “change the world,” quoting scientist Andrew May of Caribou Biosciences, who described CRISPR as “potentially, a cheap and quick way to fix anything about a genetic code” and “almost as fundamental as the transistor.”

The discovery of CRISPR’s gene-editing applications was viewed as so significant that two scientists, Emmanuelle Charpentier and Jennifer Doudna, won the 2020 Nobel Prize in Chemistry, even as a patent dispute between Doudna and another scientist, Feng Zhang — also viewed as instrumental in CRISPR’s development — continues to this day.

Other scientists, though, do not share the same optimism about CRISPR.

A ‘genetic modification procedure’ that is ‘not precise’ and ‘not breeding’

Robinson told The Defender that “in general terms, CRISPR is a gene-editing tool” that “cuts the DNA across the double strand” and can be targeted “to a precise sequence in the genome.”

According to Antoniou, “Gene editing has been around … for far longer than the CRISPR-Cas9 system has been. It’s been around for decades.”

“A DNA manipulation method or methods with which the intended outcome is to make a very targeted change in the genetic material of the organism, which could be anything from a bacterium, a plant, animal or human.

“Gene editing, I guess the operative word here is editing, which implies an alteration in a very precise, targeted way. You’re trying to make a very specific alteration in the genetic material of your target organism.”

Robinson said that while CRISPR is said to be site-specific, it is actually “sequence-specific … it will look for that particular sequence and cut the DNA at that point.” This has led many to tout CRISPR’s “precision breeding” ability.

For Antoniou though, “It is clearly a genetic modification procedure. It is not precise and it’s not breeding.”

Gene editing is often confused with gene therapy, but Antoniou said they are two different things. With gene therapy, a “normal functioning copy” of a gene is added to existing cells, he said.

Doudna, in a 2015 TED Talk, described genetic engineering as the “future” of human evolution, even touting CRISPR’s potential applications in creating “enhanced” or “designer” human beings and declaring this is no longer science fiction.

“Many scientists believe that genetic engineering is the future of our evolution. It provides us with a chance to give ourselves any traits we want, such as muscle mass or eye color.

“Imagine that we could try to engineer humans that have enhanced properties such as stronger bones or less susceptibility to cardiovascular disease, or even to have properties that we would consider maybe to be desirable like different eye color or to be taller … Designer humans, if you will. Geo-engineered humans are not with us yet. But this is no longer science fiction.”

Others in the scientific community expressed similar techno-utopianism. For instance, Wired wrote that CRISPR could deliver anything from designer babies to species-specific bioweapons.

In 2018, for instance, a Chinese biophysicist announced that he and his team created the world’s first gene-edited babies.

An article last month in The Intercept noted that the CIA has invested in a biotechnology startup, Colossal Biosciences — along with Peter Thiel, Paris Hilton and Tony Robbins — that aims to use CRISPR technology to “jumpstart nature’s ancestral heartbeat” by resurrecting extinct mammals, even the woolly mammoth.

And the Financial Times reported that another biotech firm is backing a project to bring back the Tasmanian tiger from extinction.

For Antoniou, “The reason why CRISPR has captivated the imagination of scientists is its simplicity compared to the other [gene-editing] tools I mentioned. It’s a very simple entity to construct and to deliver to the cells of your target organism to bring about the gene edit that you’re after.”

One realm in which CRISPR is promoted is medicine and the treatment of diseases. For Wired, “the real money is in human therapeutics,” including “target[ing] HIV directly.”

According to Synthego, a company that makes genome editing platforms, “CRISPR is poised to revolutionize medicine, with the potential to cure a range of genetic diseases, including neurodegenerative disease, blood disorders, cancer, and ocular disorders.”

Livescience.com writes that “CRISPR has been tested in early-stage clinical trials such as cancer therapy and as a treatment for an inherited disorder that causes blindness,” and as “a strategy for preventing the spread of Lyme disease and malaria,” while Medlineplus.gov adds “cystic fibrosis, hemophilia, and sickle cell disease” to the list.

And Bloomberg, in a 2016 article, reported that “CRISPR is being viewed as a way to make cancer drugs more effective, to build a better class of antivirals to fight HIV, and to modify pig organs to make them more suitable as transplants for humans.”

CRISPR promoted as a solution for agriculture, food shortages

Scientists and the media also promote CRISPR as a potential solution to problems facing agriculture and food production.

Another report stated that CRISPR can be used to prolong the shelf-life of perishable foods and “create crops that are disease-resistant and drought-resistant,” citing the example of a partnership between Mars, Inc., the Innovative Genomics Institute and the University of Berkeley “to create disease-resistant cacao plants.”

According to the journal Science, CRISPR can be used to create gene drives — a genetic engineering technique that increases the chances of a particular trait passing on from parent to offspring.”

Livescience.com adds that “CRISPR technology has also been applied in the food and agricultural industries to engineer probiotic cultures and to vaccinate industrial cultures … against viruses,” citing yogurt as an example. It is also “used in crops to improve yield, drought tolerance and nutritional properties.”

A February 2022 article in the journal Nature reported that China has approved new guidelines for the development of gene-edited crops using technologies such as CRISPR, significantly reducing the biosafety approval time of these crops.

Such crops are claimed to “have increased yields, resilience against climate change and a better response to fertilizer,” in addition to “rice that is particularly aromatic and [a] soya bean that has a high content of oleic fatty acids.”

Bloomberg reported in 2016 that “DuPont is already working with Caribou [Biosciences] on mushrooms that stay white after being cut” and on “25 CRISPR-related products [that] are in the pipeline, including corn, soybeans, wheat, and rice.”

And in September 2021, the Sicilian Rouge High GABA tomato reached consumers, becoming the first CRISPR-edited food to go on sale anywhere in the world.

CRISPR also has been promoted as a technology that is useful for the development of diagnostic tests — and as a weapon against potential new pandemics.

During the COVID-19 pandemic, for instance, CRISPR was used as a therapeutic and diagnostic tool for the coronavirus via the Sherlock CRISPR SARS-CoV-2 test kit, which was granted an Emergency Use Authorization by the U.S. Food and Drug Administration (FDA).

DETECTR and other COVID diagnostic methods also were developed during this period, while “similar diagnostics utilizing the search function of Cas9 have also been engineered to identify other diseases, both infectious and genetic.”

Feng Zhang — embroiled in the patent dispute with Doudna — wrote in 2020 that CRISPR is “being used as a research tool by scientists who are working to better understand how SARS-CoV-2 enters the human cells and to learn more about the biology of its pathogenesis.”

Zhang, who developed a new mRNA delivery system known as SEND that utilizes CRISPR technology, added that scientists “are working to harness CRISPR as natural viral defense properties to develop a novel antiviral effective against COVID-19.”

Messenger RNA (mRNA) technology, used in the Pfizer and Moderna COVID-19 vaccines, also has been used to “deliver CRISPR gene-editing technology that could permanently treat a rare genetic disease [transthyretin amyloidosis] in humans.”

Dr. John Leonard, president and CEO of Intellia Therapeutics, described mRNA as “a way to make CRISPR gene editing come alive,” adding that “CRISPR is the workhorse; mRNA encodes it.”

In turn, as far back as 2015, pharmaceutical giant (and, later, COVID-19 vaccine manufacturer) AstraZeneca announced collaborations with four biotechnology firms “to use CRISPR technology for genome editing across its drug discovery platform.”

Further highlighting the potential role of CRISPR for diagnostics, the WEF in 2020 said the technology can help deliver a “future of healthcare” that “lies in decentralized testing,” resulting in the “accelerated adoption of value-based care models, rather than fee-for-service healthcare as in the United States.”