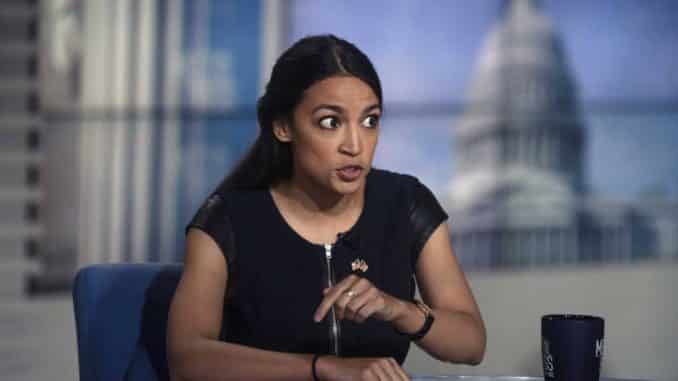 Thesis, anti-thesis, synthesis. AOC scores a big victory by forcing the Democrat leadership to adopt any form of her Green New Deal, even if watered down from the original version. ⁃ TN Editor

Leading Democrats in the U.S. House of Representatives announced a plan Tuesday to introduce a new, more conservative alternative to the “Green New Deal,” the plan introduced earlier this year to great fanfare by Rep. Alexandria Ocasio-Cortez (D-NY).

The original bill, proposed by Ocasio-Cortez and Sen. Ed Markey (D-MA) in February, calls for “meeting 100 percent of the power demand in the United States through clean, renewable, and zero-emission energy source” through a “10-year national mobilization” — i.e. roughly by the year 2030. Ocasio-Cortez has also suggested the world only has 12 years before reaching a point of no return before the problem climate change becomes impossible to solve.

The new proposal to be backed by Democrat leadership, however, will set the goal as 2050 — twenty years later, according to The Hill. It also assumes that 2050 is the point of no return — not sometime in the next 12 years.

The new proposal echoes early criticisms of the Green New Deal, such as those offered by former New York City mayor Michael Bloomberg, who said the party needed a plan that was more practical. “I’m a little bit tired of listening to things that are pie in the sky, that we never are going to pass or never are going to afford,” he said at the time, as quoted by the Washington Examiner.

The Hill quotes Democratic members of the Energy and Commerce Committee not-so-subtly criticizing Ocasio-Cortez’s plan. Rep. Paul Tonko (D-NY), for example, said: “We can do any kind of whimsical thing but we have to do this in a way that includes conversations with stakeholders, their buy-in and their involvement in a consensus bill.”

Who are the “stake holders” and what is “their buy-in”? Big gap in that explanation. I’d like to know.

This is just a great big fairy tale communistic babbling to people who don’t care. The actress Cortez is just playing her part as the globalists steal all the wealth of the world for Satan who promised them riches. That is what its about. Behind the scenes Elle we have an unseen enemy. His first goal is to eliminate belief in God and destroy the ones who believe in him. In America and around the world they have succeeded in destroying families, brain washed the children & everyone else, promoted Buddhism through Yoga & meditation, the spread of drug addiction,… Read more »