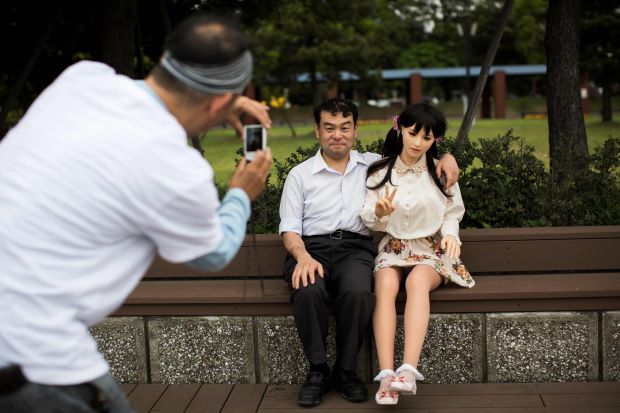 With sex already down sharply in Japan, men are turning to sex dolls to find ‘true love’. This is demographic suicide because reproduction is impossible. Technocrats who build lifelike sex dolls do so because they can, not because there is even one shred of evidence that they will be good for mankind. ⁃ TN Editor

When the spark went out of Masayuki Ozaki’s marriage, he found an unusual outlet to plug the romantic void – a silicone sex doll he swears is the love of his life.

The life-size dummy, called Mayu, shares his bed under the same roof as Ozaki’s wife and teenage daughter in Tokyo, an arrangement that triggered angry rows before a delicate truce was finally declared.

“After my wife gave birth we stopped having sex and I felt a deep sense of loneliness,” the 45-year-old physiotherapist told AFP in an interview.

Physiotherapist Masayuki Ozaki takes a bath with his silicone sex doll Mayu, who sleeps with him in the home he shares with his wife and teenage daughter in Tokyo. (Photo: AFP)

“But the moment I saw Mayu in the showroom, it was love at first sight,” blushed Ozaki, who takes his doll on dates in a wheelchair and dresses her in wigs, sexy clothes and jewellery.

“My wife was furious when I first brought Mayu home. These days she puts up with it, reluctantly,” he added.

“When my daughter realised it wasn’t a giant Barbie doll, she freaked out and said it was gross – but now she’s old enough to share Mayu’s clothes.”

Ozaki is one of an increasing number of Japanese men turning to rubber romance in a country that’s lost its mojo.

He also admits to being turned off by human relationships.

“Japanese women are cold-hearted,” he said while on a seaside stroll with his silicone squeeze.

“They’re very selfish. Men want someone to listen to them without grumbling when they get home from work,” Ozaki added.

“Whatever problems I have, Mayu is always there waiting for me. I love her to bits and want to be with her forever.

“I can’t imagine going back to a human being. I want to be buried with her and take her to heaven.”

I guess the days of Japanese men working 14 hours a day and being found dead hunched over their desks at work are over. It is about time these people have worked way to much and now it is up to the women to get with the program and allow their husbands a life. The rubber women are a way of showing them they can be replaced if they do not change their ways. Weird but it would seem effective. It will not be long before they are here in big numbers.