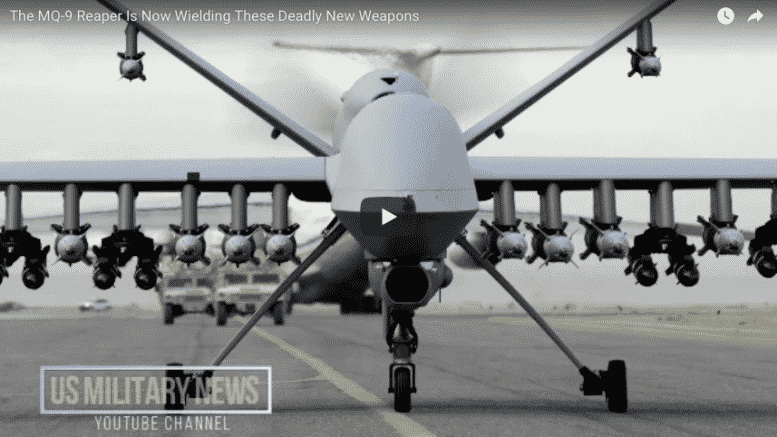 The Military/Industrial Complex is full of Technocrats who believe science and technology has the answer to every problem. In many cases, the desire for anonymous killing is exacerbated by immersion into video games where avatars are blown to bits with no accountability or ethical concern for human life.  ⁃ TN Editor

An MQ-9 Reaper drone has bagged its first air-to-air kill of another small, aerial vehicle in a controlled simulation, an official revealed to Military.com this week.

The successful test late last year showed the U.S. Air Force that an unmanned vehicle like the MQ-9 has the ability to conduct air-to-air combat, much like its manned fighter brethren such as an F-15 Eagle or F-22 Raptor, according to Col. Julian Cheater, commander of the 432nd Wing at Creech Air Force Base, Nevada.

“Something that’s unclassified but not well known, we recently in November … launched an air-to-air missile against a maneuvering target that scored a direct hit,” Cheater said. Military.com sat down with Cheater here at the Air Force Association Air, Space and Cyber conference outside Washington, D.C.

“It was an MQ-9 versus a drone with a heat-seeking air-to-air missile, and it was direct hit … during a test,” he said of the first-of-its-kind kill.

“We develop those tactics, techniques and procedures to make us survivable in those types of environments and, if we do this correctly, we can survive against some serious threats against normal air players out there,” Cheater said Monday. “We will go participate in ‘Red Flag’ exercises, and we will drop weapons in testing environments to make sure that we can fight against those type of adversaries.”

The effort is key to preparing for the next big aerial war against near-peer threats such as Russia or China, who are advancing their skill sets not only in unmanned aerial vehicles but also in hypersonics, electronic warfare, lasers and missile testing, Cheater said.

“In many parts of the world, it’s almost a hybrid fight by proxy,” he said. “… the MQ-9 Reaper will certainly be a big part of that. So if you package this aircraft in properly with other aircraft, it will be survivable.”

The MQ-9 has a payload of 3,750 pounds and carries a combination of AGM-114 Hellfire missiles and GBU-12 Paveway II and GBU-38 Joint Direct Attack Munitions, according to the service. The MQ-9’s weapons load remains flexible, Cheater said.

As the Air Force began phasing out its MQ-1 Predator UAV in 2017 before its official retirement earlier this year, the larger, more lethal MQ-9 began expanding its mission set — especially in areas like Afghanistan.

For example, when the military mission in Afghanistan transitioned from Operation Enduring Freedom to the NATO-led Resolute Support, the MQ-9’s missions increased tenfold in comparison to the MQ-1.

The Reaper conducted 950 strikes, firing approximately 1,500 weapons, between January 2015 and August 2017, according to Air Force Central Command statistics provided to Military.com at the time. The MQ-1 executed only 35 strikes, employing roughly 30 weapons, in that same timeframe.

“We specialize in urban settings,” Cheater said. “That is an important capability that very few aircraft and aircrews have.”

But last year’s test shows how the service is refocusing and thinking about the agility of the Reaper.

“It’s a balance of the forces and resources that we have available, especially on the maintenance side of the house, and everyone wanting to be as close to the fight in numerous locations,” Cheater said.

For example, “We can fly from one continent to the next — we [recently] flew nine [Reapers] from one operating area to another, and that is agile, that is flexible, and it provides options to the combatant commander,” he said, without disclosing locations.

The Air Force also recently moved a contingent of MQ-9s to Larisa Air Base in Greece for intelligence, surveillance and reconnaissance missions across Africa, according to Defense News. Without commenting on additional locations, Cheater said forward movement will always be part of the MQ-9’s future, especially with intelligence gathering on the rise.