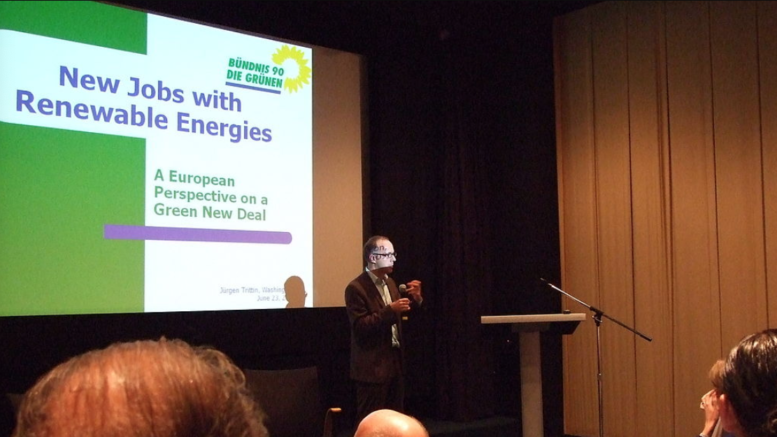 Please Share This Story!
PDF 📄
The UN says that “A green economy implies the decoupling of resource use and environmental impacts from economic growth”. This indicates a total ignorance the economic reality that resources are absolutely necessary for any economic activity whatsoever.

In this article, the author thinks it will all work out if only it is ‘just’ in implementation. ⁃ TN Editor

The European green agenda is key to saving the planet—but it could also save an enlightenment-based multilateral order from nationalist irrationalism.

We are about to go past the point of no return regarding climate change.

All scientists are pointing out that global warming is an irreversible reality and that it is now up to human action to set limits to it. We need specifically to mitigate the temperature increase, which causes serious damage to our way of life and could even threaten the human species.

Climate action has become a categorical imperative for all those who want public affairs to be governed on the basis of reason and scientific knowledge. It is not by chance that the extreme right and the rising identity movements have chosen to make the ecological dimension one of their battlefields—yet another aspect of the war being waged against the enlightenment.

In 2015, the international community managed to thrash out the Paris agreement, aiming to keep the global temperature rise to 1.5 degrees Celsius above preindustrial times and certainly within the 2C threshold of irreparable damage to the planet and those who inhabit it. This objective must be translated into actions which allow for a drastic reduction of greenhouse-gas emissions and tackle the much-needed decarbonisation of the economy—effectively, steadily and ambitiously.

Putting an end to dependence on coal is the greatest economic transformation our societies will experience since the industrial revolution. It is a huge restructuring—affecting production, distribution and consumption—and it will bring about significant changes in energy, infrastructure, transport, tax systems, financial regulation and international trade. We are facing a Herculean task, in which the planet is at stake—and our way of life with it.

This transformation, the green transition, is neither cost-free nor however without potential gains. Particularly, there are costs for industry, for workers and consumers, which need to be shared in a fair manner and through the appropriate social ‘shock absorbers’. But there are also potential benefits, in job creation and equally shared and redistributed growth.

The task of making the green transition a just and inclusive transition is the key to addressing together the two major challenges faced by democracies around the world: inequality and climate change. A just transition is the only way to make this possible, avoiding social and electoral eco-reactions which reject and prevent the important changes we must undertake in our labour market, our economy and our society.