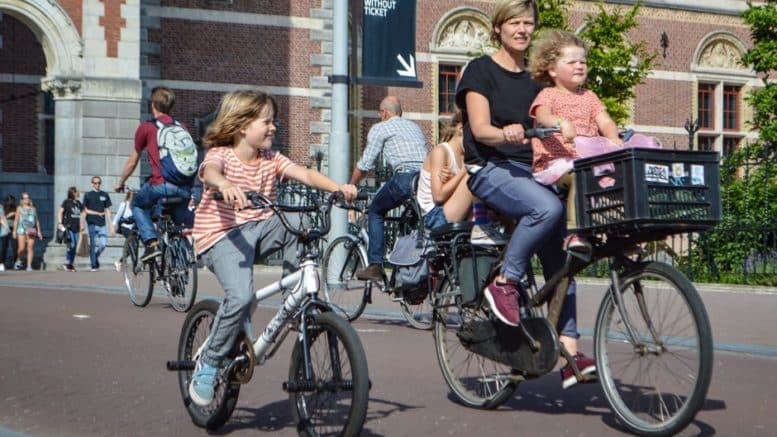 Bicycle helmets are uncommon in the Netherlands, even for children. (Image: Modacity)

Please Share This Story!
PDF 📄
Sustainable Cities will do whatever it takes to get you out of your automobile and onto public transportation. If you want a personal transportation device, you will get a free pass to acquire a bicycle to get some exercise and lose some weight at the same time. Technocrats always seem to know what’s best for you. ⁃ TN Editor

Frustrated by the obstacles to urban cycling in North America, Melissa and Chris Bruntlett traveled with their two kids from Vancouver to the Netherlands in 2016 to take a deep five-week dive into places that do cycling better. Traversing cities in the Netherlands by bike, they found that cycling is not just a better way to get around; when done right, it leads to healthier, safer, more vibrant, more family-friendly communities. They wrote it all up in their new book, Building the Cycling City: The Dutch Blueprint for Urban Vitality, which provides a guide for cities and communities that want to do cycling right, and for urban cyclists and families who want to learn the keys to cycling as a way of life.

I spoke to the Bruntletts by phone earlier this month about what they’ve learned and about what cities and people in the United States and Canada can learn from the cycling lifestyle in the Netherlands. Our conversation has been lightly edited for space and flow.

Why did you decide to go to the Netherlands and start cycling like the Dutch?

Melissa: We lived so long experiencing cycling in Vancouver and telling a lot of great stories about what building cities for cycling can do. We felt that in order to really tell that story, we needed to go to the place where that is what people enjoy throughout the country and learn what has made them so successful.

Sometimes critics of cycling say it’s about “yuppies,” “hipsters,” and “the creative class,” and a force for “gentrification.” But your book talks more about the role of cycling for families and in building stronger communities.

Chris:  Cycling plays a tremendous role in how we now look at cities for families. If it’s not safe enough for our 8-year-old son, then it’s just simply not good enough. I think for far too long in North America, we’ve made cycling acceptable for the “fit and the brave” that are willing to suit up and get on their bikes, but there are entire segments of the population that are completely ignored.

M: What people overlook in those conversations are the people that can’t drive. For anyone that is not of driving age, cycling is an independent means of transportation, so they don’t need to rely on an adult or a bus. When we get older, there is a certain point when we may not be legally allowed to drive anymore. A lot of the conversation in terms of the elderly population is around aging in place. But it also includes the ability to still feel connected to their community, being able to go outside and travel comfortably even with limited mobility. Bicycles play a key part in that. It’s less stress on the joints. It also affords elderly people a way move around the places where they have always lived and where they want to continue living. By saying that the infrastructure and the investment in cycling is only for the “fit and the brave” is to completely ignore entire swaths of our population and not afford them the same rights that we afford able-bodied people in their 20s and 30s.

I remember when I was a boy growing up in New Jersey, my brother and I rode our 10 speeds everywhere. LeBron James recently said the thing that most affected his youth growing up in Akron, Ohio, was the ability to ride a bike everywhere. How can cycling help kids get a sense of the city or even a sense of freedom?

C: The Netherlands ranks as having the happiest children in the world. That’s not by accident. That’s because they give them safe places to cycle and they trust kids to get from place to place without adult supervision. They don’t quite have the stranger danger that we have. It’s also because their streets are traffic-calmed, there’s fewer cars, they’re going slower. Kids are given a free reign to get around the city, whether it’s by foot, bicycle, or bus.

M: A lot of kids are getting less and less physical activity. And that simple bike ride to school is one of the easiest ways to build in 15-30 minutes of physical activity in a day and help them be a little bit healthier. The Dutch are one of the only advanced countries to reduce their obesity rate. It’s not because they have the healthiest diets. It’s because they have built exercise into their day-to-day activity.

I had a colleague from Sweden who visited Toronto and she said she wouldn’t ride in Toronto or let her kids ride there, not just because of cars and inadequate bike lanes, but because the cyclists ride too fast—like they’re in the Tour de France is how she put it. But as you point out in your book, cyclists in the Netherlands ride at a slower pace. Why is that important?

C: I think that’s an indication of how you build your streets. If you build hostile streets, people are going to want to keep up with car traffic and armor themselves up with protective equipment. There’s a differentiation in the Dutch language between a sports cyclist and a utilitarian cyclist; the two phrases loosely translate to “walking with wheels” versus “running with wheels.” The “wheeled walkers” make up the vast majority of people that bike in the Netherlands because they’ve created these conditions that aren’t as hostile, so anybody feels like they can do it.

Another point you make in the book that’s so important is about the different kind of bikes Dutch cyclists ride.

M: They’re upright, they’re a little bit slower but they’re meant for utility. They’re meant to get them comfortably, without any complication, from point A to B, hauling some goods along the way or hauling children. Those utility bikes mean a lot in terms of simplifying the trip. They don’t overcomplicate it. The bikes already come with all the gear, you don’t have to worry about buying lights or a bell separately. They’re meant for day-to-day transportation.

Why is the bike shop such an important part of the cycling environment?

C: In Vancouver, the cycling shops were still very sport-focused. The staff weren’t trained to sell bikes, they usually only have one or two collecting dust in the corner. Because the vast majority of people riding bikes in North America are doing it for sport and recreation, the retail industry is still playing catch up. It’s almost become this chicken and egg scenario where they don’t see a large market for transportation bikes so they’re not putting many resources into developing that market. Bike sharing has kind of changed this a little bit, because people are riding these more upright utilitarian bikes. But if they ultimately want to invest in one, they have a real job on their hands trying to find one.