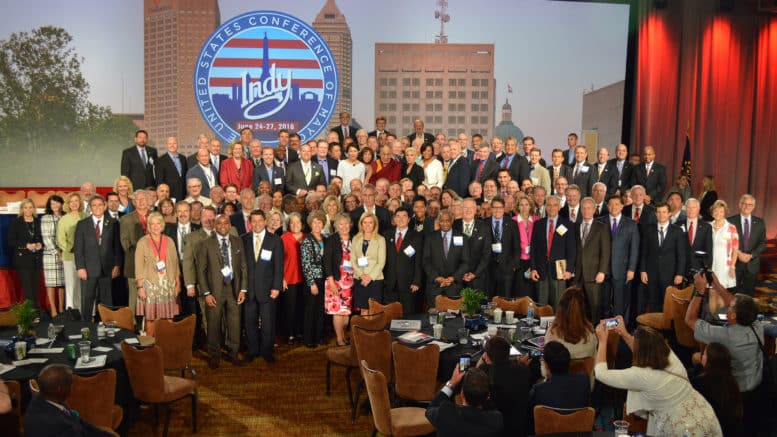 Please Share This Story!
PDF 📄
The future of globalization and Sustainable Deveopment is seen in cities, not nation-states. The rise of autonomous cities is seen throughout the world, and global interests are whispering in the ears of U.S. mayors to effectively secede from the Federal government. ⁃ TN Editor

In the Age of Trump, some experts have been urging cities to declare independence from the federal-level chaos in Washington. Others herald local power and local actions as antidotes to national dysfunction. Across the country, corporations and philanthropies are pouring millions of dollars into city initiatives, attracted by the notion that solutions in urban areas—on issues like economic development, clean energy, and resilience—might bubble up to the national level.

I understand the impulse. From the perch of a national think tank on cities, I see cities mounting promising responses to big problems like climate change, housing affordability, and criminal justice. At the Brookings Institution, we help local and regional leaders accelerate solutions to global competitiveness and shared prosperity.

But city boosterism can also go too far: Urging city leaders to go it alone celebrates a deep dysfunction in federalism—and it normalizes a self-destructive shift in politics and governance.

For instance, the Trump administration is using the narrative of increased local capacity to justify draconian cuts to federal supportfor cities, from transit programs, community development financing, to the entire Economic Development Administration. The president’s 2019 budget notes that it “…recognizes a greater role for state and local governments and the private sector to address community and economic development needs,” signaling abdication of a longstanding federal role in those areas.

Further, federal policies do matter, whether city leaders like it or not. Federal deportation forces are striking fear into city and suburban immigrant communities. The new tax law imposes a limit on state and local tax deductions, making it more economically and politically costly for city governments to raise revenue. Tariffs are threatening companies and jobs across all kinds of communities but the Trump administration proposes to protect farmers from those effects with billions of dollars in subsidies provided by urban and suburban taxpayers. City-by-city actions can’t overcome national policies that broadly undermine urban America.

And as Sherrilyn Ifill of the NAACP Legal Defense Fund has observed, extolling the virtues of localism papers over the dark history of “local control” in America, where deference to local decision-makers has yielded persistent racial segregation and the active suppression of minority voting rights. “We should not romanticize localism,” Ifill wrote, responding to the recent New York Times column on “The Localist Revolution” by David Brooks. “It has often been brutish, oppressive & violent.”