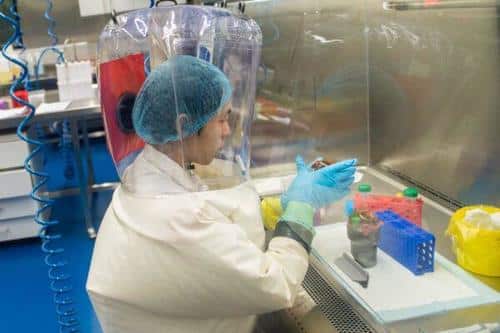 Please Share This Story!
PDF 📄
The Wuhan Institute of Virology is almost certainly going to be blamed for the “leak” of COVID-19. However, we may never know for certain if it was biowarfare or an accidental release by some bumbling scientist inside the lab.

We can know for certain that China will never bend to tell the truth and it will be belligerently militant toward anyone who accuses them of any involvement. Watch for the use of military power to intimidate the world into self-censorship. ⁃ TN Editor

Namely, ‘a raft of still-unexamined evidence that required additional computer analysis that might shed light on the mystery,” according to anonymous senior administration officials.

In other words, the US government has been sitting on a large collection of intelligence in perhaps the most important investigation into an economy-wrecking global pandemic, as China destroyed evidence and has refused to cooperate with international probes. According to the report, Biden’s call for the new investigation was in response to the ‘new’ evidence.

While officials declined to describe the new evidence, they are hoping to apply ‘an extraordinary amount of computer power’ to analyze what the Times speculates may be ‘databases of Chinese communications, the movement of lab workers and the pattern of the outbreak of the disease around the city of Wuhan.”

Biden’s call was also meant to spur American allies and intelligence agencies to scour their own evidence, such as “intercepts, witnesses or biological evidence — as well as hunt for new intelligence,” to assess whether the Chinese government covered up what happened.

Astute readers will note that the NYT substitutes its own facts, framing any lab release as of course “accidental,” and suggesting that Biden only dismissed the lab origin theory “until the Chinese government this week rejected allowing further investigation by the World Health Organization.”

In reality, plenty of evidence existed which the entire leftist establishment and their media surrogates flatly branded a ‘debunked conspiracy theory’ after then-President Trump promoted it, while the World Health Organization (WHO) and US Centers for Disease Control (CDC) parroted CCP propaganda that the virus could have only emerged via ‘natural origin’ (as opposed to the Chinese lab manipulating bat coronaviruses in the same city that the pandemic started).

So far, the effort to glean evidence from intercepted communications within China, a notoriously hard target to penetrate, has yielded little. Current and former intelligence officials say they strongly doubt anyone will find an email or a text message or a document that shows evidence of a lab accident.

One allied nation passed on information that three workers in the Wuhan virological laboratory were hospitalized with serious flulike symptoms in the autumn of 2019. The information about the sickened workers is considered important, but officials cautioned that it did not constitute evidence that they caught the virus at the laboratory — they may have brought it there.

The White House is hoping that allies and partners can tap their networks of human sources to find additional information about what happened inside the laboratory. While the United States has been rebuilding its own sources in China, it has still not fully recovered from the elimination of its network inside the country a decade ago. As a result, having allies press their informants about what went on inside the Wuhan Institute of Virology will be a key part of the intelligence push ahead.

The inquiry has not reached a dead end, a senior Biden administration official said. Officials would not describe the kind of computational analysis they want to do.

According to the Times, both scientists and spies will be working to unravel how the pandemic started, as “Senior officials have told the spy agencies that their science-oriented divisions, which have been working on the issue for months, will play a prominent role in the revitalized inquiry.”

Will the Five Eyes rally around the lab leak?

According to the report, US allies have been providing evidence since the beginning of the pandemic. Australia, a member of the so-called Five Eyes partnership which also includes Britain, Canada and New Zealand, has strongly promoted the lab-leak theory. And while US intelligence agencies are reportedly coming together “around the two likely scenarios,” a former State Department official says the evidence to support the natural origin theory is virtually non-existent.

“We were finding that despite the claims of our scientific community, including the National Institutes of Health and Dr. Fauci’s NIAID organization, there was almost no evidence that supported a natural, zoonotic evolution or source of COVID-19,” said former State Department official David Asher in a statement to Fox News. “The data disproportionately stacked up as we investigated that it was coming out of a lab or some supernatural source.”

Asher, the lead contractor on the subject, said the team investigated the two chief hypotheses for the virus’ origins, the other being the lab-leak theory that has gained credence after widespread media dismissal over the past year.

Asher has a history of investigative work tracking money for the AQ Khan network, North Korea’s nuclear program, and top Al Qaeda leaders, but has fallen under scrutiny from former State Department officials.

Asher was critical Thursday of former Assistant Secretary of State Chris Ford, who expressed reservations about the investigation’s findings and cautioned against the lab theory. Ford told Fox News that the AVC probe had been kept secret from him and bypassed department and intelligence community biological experts, although adding the lab origin theory was “very possible.” –Fox News

“That was the epicenter of synthetic biology in the People’s Republic of China, and they were up to some very hairy stuff with synthetic biology and so-called gain-of-function techniques,” said Asher, adding that the odds of natural origin were ‘extremely long.’

“To say this came out of a zoonotic situation, it’s ridiculous,” he concluded.

The same goes for Lyme Disease and A.I.D.S. (in which Fraud-Fauci ALSO had his filthy hands in!!). As well as many other ‘diseases’. Are people THIS Mentally Stunted, to that of a retarded 3 year old, that they cannot understand ‘WHERE’ these ‘diseases’ COME FROM?!?!?! Time to GROW UP, Children!!

Sars Cov2 is also non-existent, except as a computer model. No one can come up with a sample. No gov’t … no agency … Covid 19 is non-existent … It was always influenza A and B … which was masqueraded as something that caused ‘covid 19’ respiratory syndrome. It’s why the CDC declared that somehow, magically, there was no flu season in 2020 … there was a normal flu season and the usual people with co-morbidities died. There was no covid 19 pandemic. It was all drama …. an excuse to levy the gene therapy on everyone. SO, the evidence… Read more »

Nothing happened in China on its own. China is just the other side of the coin. Any theory of covid origin that does not include the royal family, Rotschild, and Rockefeller is misdirection. China was created by, and is controlled by, the elites at the top. Global shipping is being halted by the power elite on purpose, and food shortages, including countries unwilling to ship grain, are also being manufactured. The elites have a $1.5-2.5 Quadrillion derivatives debt to pay. They’re broke and have to bury the collapse inside of a manufactured collapse to avoid financial poverty. The war they’re… Read more »

Complete scam from start to finish…