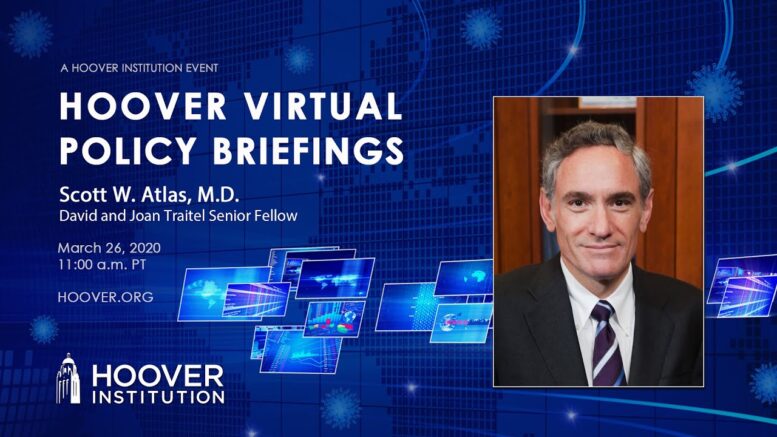 Dr. Scott W. Atlas has argued that the science of mask wearing is uncertain, that children cannot pass on the coronavirus and that the role of the government is not to stamp out the virus but to protect its most vulnerable citizens as Covid-19 takes its course.

Ideas like these, both ideologically freighted and scientifically disputed, have propelled the radiologist and senior fellow at Stanford University’s conservative Hoover Institution into President Trump’s White House, where he is pushing to reshape the administration’s response to the pandemic.

Mr. Trump has embraced Dr. Atlas, as has Mark Meadows, the White House chief of staff, even as he upsets the balance of power within the White House coronavirus task force with ideas that top government doctors and scientists like Anthony S. Fauci, Deborah L. Birx and Jerome Adams, the surgeon general, find misguided — even dangerous — according to people familiar with the task force’s deliberations.

“I think Trump clearly does not like the advice he was receiving from the people who are the experts — Fauci, Birx, etc. — so he has slowly shifted from their advice to somebody who tells him what he wants to hear,” said Dr. Carlos del Rio, an infectious disease expert at Emory University who is close to Dr. Birx, the White House coronavirus response coordinator.

Dr. Atlas is neither an epidemiologist nor an infectious disease expert, the two jobs usually associated with pandemic response. But his frequent appearances on Fox News Channel and his ideological surety caught the president’s eye.

So when Mr. Trump resumed his coronavirus news conferences in July and August, it was Dr. Atlas who helped prepare his briefing materials, according to people familiar with them. And it was his ideas that spilled from the president’s mouth.

“He has many great ideas,” Mr. Trump told reporters at a White House briefing last month with Dr. Atlas seated feet away. “And he thinks what we’ve done is really good, and now we’ll take it to a new level.”

The core of his appeal in the West Wing rests in his libertarian-style approach to disease management in which the government focuses on small populations of at-risk individuals — the elderly, the sick and the immune-compromised — and minimizes restrictions for the rest of the population, akin to an approach used to disastrous effect in Sweden. The argument: Most people infected by the coronavirus will not get seriously ill, and at some point, enough people will have antibodies from Covid-19 to deprive the virus of carriers — “herd immunity.”

Even so, Trump’s going to be better than whomever the Dems run against him.

The lesser of two evils is still evil. In this case is one more evil than the other? Probably. Will the Dems move the globalist reset along more quickly? Likely. But with either party it will be headed the same direction, which is evil. I am glad to see Dr.Atlas take on this role with advice not paid for by the vaccine industry, but Fauci seems to continue being the unofficial spokesperson for the covid agenda via his interviews with the media.

Dr. Fauci should be forced to wear a face mask for like – a sound-proof one.

Is he? He hasn’t proved that so far!

The race between President Trump and Biden is like one between a thoroughbred race horse and a three legged donkey.

Two wings of the same bird…. the Great Deception is here.

AGREE! WHAT ABOUT “WARP SPEED” VACCINE DELIVERED “POWERFULLY” BY THE MILITARY?

I agree way to late. The only way to save face is to fire and then prosecute these people for treason. Unbelievable what they have pulled on the american people. I refer to John Rappoport’s 9/2 posting ” Were all to stupid”

We’ll see what happens but I’ve no faith at all there will be any change here. I think it’s a political ploy as the V is pushed into remission but the masks stay on and governments continue to follow the predatory class’ orders given directly by the UN where they all live and work. So far, Trump has done nothing but attempt to protect his assets–that is completely clear from just about everything he does NOT do and what he does. He’s simply trying to hold onto his wealth as this murderous predatory group MAKES everyone on planet Earth do… Read more »

But the buck stops at Trump for sure. Look at all the damage that has been done already. I’m seriously thinking that Biden was chosen so Trump would win again. Either way the destruction of America began when America became a nation. 1787, that is 233 years since September 17th 1787 when the Constitution was signed. Christianity has been replaced by paganism, atheism, witchcraft, humanism, Gnosticism, spiritism, Buddhism, Yoga, many cults, etc. Christians came from Europe to escape the Roman Catholic Church’s heavy persecution and to worship freely. Today that worship has been taken away, just look at what California… Read more »

I agree with much of what you say. However President Trump IMO has hardly put a foot wrong so far. People say that he is part of the same conspiracy, but I will continue to support him, and pray for him, wholeheartedly until he proves me wrong. TRUMP 2020!

Finally! A doc with sound advice without ties to Big Harma and the globalists. These first crew need to be tried and then hung in the town square along with that gates thing for crimes against humanity.
It’s time to stand up America and ditch the masks that are nothing more than Control propaganda devices. And say NO to their dangerous dna altering, tracking vaccines.
More importantly Think! for yourself and may common sense prevail!

Did Fauci break the law by moving research and funds allocated for research in the U.S. and moving them to China? Is Fauci above the law? Then he should be indicted.

In addition he should bring in America’s Frontline Doctors who have demonstrated Hydroxychloroquine’s effectiveness as both treatment for and prophylactic against SARS-CoV-2, rendering vaccines (operation Warp Speed), digital biometric implants and lockdown, not only unnecessary but harmful. See: https://americasfrontlinedoctorsummit.com/hcq-info/ before it gets taken down by big pharma big tech interests.

The bottom line is Dr Fauci lied to the president and the American people! Fauci told everyone that we didn’t need to wear mask. He later admitted that he lied because he didn’t want Americans buying up the mask that the first responders use. The problem is that it’s not his job to lie to the American people. He could have avoid the question or told us to wear mask but don’t buy up the kind he was worried about. Either way Fauci lied and people may have died because of it. He should have been fired along time ago.… Read more »

I saw Dr Atlas on CNN last night and he was saying those trying to paint him as focusing on herd immunity are fools and propagandists. Hmm…..
You’re a faulty journalist not reporting the facts. Shame on you.
Trump2020🇺🇸🌎

This auther is clearly part of the swamp..first off..it’s not mr Tump…it’s President Trump
Fauci and that blond bimbo are hell bent on doing gates’s bidding. He is no more of an expert on health issues as gretta thornberg is on climate change. Good riddence to nazi fauci!

Why didn’t you let me leave my comment?
This is America, freedom of speech
There was no profanity there?
Just facts

That’s a slanted piece. I saw Dr Atlas on cnn last night and the cnn automatron was pushing this narrative of him completely focusing on herd. I’m sure Atlas understands herd and certainly has discussed it. This journalist wants to pull that. Dr. Atlas is very smart, and he schooled the cnn reporter. This piece isn’t doing Trump any favors. He wants us to feel like he’s with us, but then he flips, and many (including me, if I hadn’t heard it come out of Atlas’s mouth!) He wants us to feel a certain way, and nothing could be further… Read more »