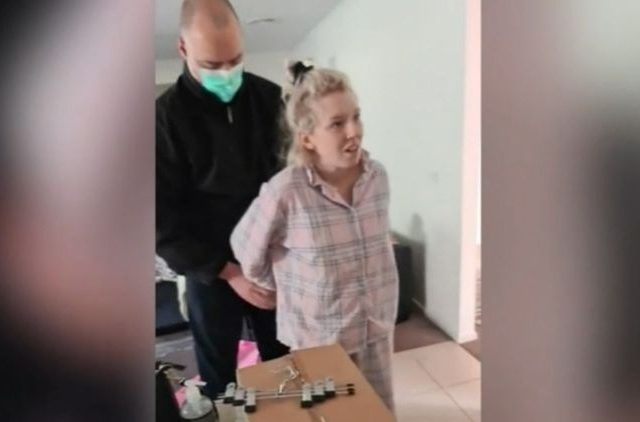 Please Share This Story!
PDF 📄
Australia has gone full-on police state as it manhandles women by body-slamming and slapping them into handcuffs if they dare to protest lockdowns, mask wearing or social distancing. Once a destination of choice for freedom and liberty, Australia is turning into a dystopian nightmare.

These are not terrorists who are being arrested. Neither are they violent criminals. They are rather ordinary citizens who see through the political agenda and choose to not wear a mask. Technocrat social engineers cannot and will not tolerate any criticism or disobedience to their pseudo-science mandates. ⁃ TN Editor

Police in Australia arrested a pregnant 28-year-old woman in front of her partner and two children Wednesday for allegedly planning a coronavirus lockdown protest and promoting it on Facebook.

Police in the state of Victoria took the woman, Zoe Buhler, into custody at her home after she created a “freedom day” event on Facebook calling for people to peacefully gather against the government’s lockdown measures.

“As some of you may have seen the government has gone to extreme measures and are using scare tactics through the media to prevent the Melbourne protest,” the now-deleted event description read, ABC News reports.

“Here in Ballarat we can be a voice for those in stage four lockdowns. We can be seen and heard and hopefully make a difference!”

Video of the arrest shared on social media shows officers handcuffing Buhler in front her partner and children. In the video, Buhler becomes increasingly distressed as she tells officers she is pregnant.

“I have no idea why you guys are doing this,” she tells officers. “My two kids are here. I have an ultrasound in an hour. I’m happy to delete the post.

“I don’t really understand what I’ve done wrong. This is ridiculous. I didn’t realise I was doing anything wrong.”

The woman tells police she has an ultrasound appointment in an hour’s time. She offers to delete the post and questions the need to arrest her in front of her two children.

But Victoria police confirmed the woman was taken into custody and charged with incitement. A mobile device was also seized, police said.

The apprehension comes just days after a group of anti-lockdown protesters clashed with police in the state capital Melbourne at a separate event and almost 200 more Victorians were fined for breaching restrictions.

Victoria is governed by hard-left Australian Labor Party (ALP) leader Daniel Andrews who has seen the state top the national list of infections and deaths during the coronavirus pandemic.

Apparently Australia, a country I once admired and wanted to someday visit, has gone Communist in rule, and cowardliness in inhabitance! Sad!

The men there have been gelded and programmed in school to become girly men/sissies. I have no respect for the E.U. citizens either. New Z. likewise.

Looks like the Chinese are in deep in the down under. Such a shame. Lesson to be learned here, never ever give up your guns! Never!