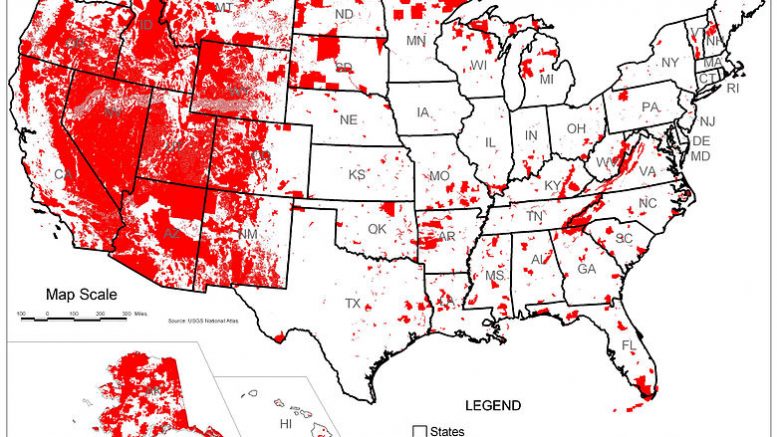 I have stated for years now that Sustainable Development was a resource grab of epic proportions. Should the Federal government own 85% of a state like Nevada? Not according to the Constitution, and yet, the Federal Government is the largest land owner in the nation, owning 36 percent of the landmass of our country. ⁃ TN Editor

Of course the federal government will always need a very small amount of land for certain national purposes, and nobody is disputing that.  According to the Heritage Foundation, the following are the primary purposes that federal land is being used for…

We will always need to have some land set aside for those purposes.

But does the Bureau Of Land Management really need more than 247 million acres?

Does the Forest Service really need more than 192 million acres?

Does the Fish and Wildlife Service really need more than 89 million acres?

If the feds were doing a good job, that would be one thing, but in so many instances federal land managers have gotten an extremely bad reputation.  The following comes from an article by Sue Lani Madsen…

For example, federal land is exempt from state noxious weed control laws, and lack of weed control has earned federal land a reputation as a bad neighbor. Frustrated local federal land managers are hindered by layers of internal regulations and restricted funding that make timely response to weed outbreaks difficult.

And thanks to mismanagement by the feds, wildfires tend to spread very rapidly in many areas owned and controlled by the federal government.  At this point more than 2.6 million acres of land have already burned in 2017, and that is close to 30 percent ahead of last year’s pace.

If you have never lived in a western state, it may be difficult for you to imagine just how frustrating it is to have the federal government in control of vast stretches of your state.  In so many cases the feds simply do not care about local issues or concerns, and when they drop the ball there is often very little that can be done about it.

According to Ballotpedia, the federal government owns more than 28 percent of the land in 12 different western states…

Here in Idaho, we are glad to have so much public land because it is a wonderful thing for hunters, fishers, hikers and those that enjoy other outdoor activities.

So we want to continue our tradition of having wide open spaces that are owned by the public – we just want the federal government to hand over the keys and leave.

Paying for wildfire protection alone—it accounts for about half of the U.S. Forest Service’s annual budget of $6.5 billion—would burden Western taxpayers, says the Center for Western Priorities, a conservation group.

States would be forced to raise taxes or sell off iconic national properties to developers or other private investors in order to pay for everything the federal government does now—from complicated tasks like enforcing environmental regulations and maintaining cultural and historic resources to simple ones like putting up road and trail signs.

But one study found that it is actually profitable for states to manage their own public lands.  Here is more from Sue Lani Madsen…

A 2015 study by the Property and Environment Research Center, a free-market environmental think tank, consistently found state-managed land provided a return on every dollar spent while federal lands managed by the U.S. Forest Service and Bureau of Land Management cost more to operate than they return in revenue.

At the end of the day, this is just another area where we need to readjust the balance of power between the states and the federal government.  Our founders intended to create a system where the states had much more power than the central government, but instead that has become totally flipped around.

The US gov is supposed to only “own” 10 square miles (DC) and “forts and ports” They should own NOTHING. Keep their noses out of other peoples business. Game Wardens have total impunity to come on any ones property at any time for any reason? HOGWASH. I got a few things that say different…………… Humans are humens, just because you got a pretty gold colored badge, a costume and gun means nothing to me

I applaud the roll back of Medicaid funding. Here in Virginia, Medicaid is illegally used to subsidize nonconsensual human subject research. That is a violation of federal and state statute. Virginia has illegally, unconstitutionally involuntarily committed hundreds of thousands of innocent Virginians testing military grade active denial system in the form of an application. Most citizens are unaware that their identity has been stolen & that the social workers, hospitals, doctors, & surgeons have billed Medicaid tens of thousands of dollars stealing their identity. They implanted me with a known human carcinogen, biochip, & have tortured me for a decade… Read more »

The map you are using is not correct because it is from 2005 so its about 12 years old. We need a newer map because they have a LOT MORE land now then that.