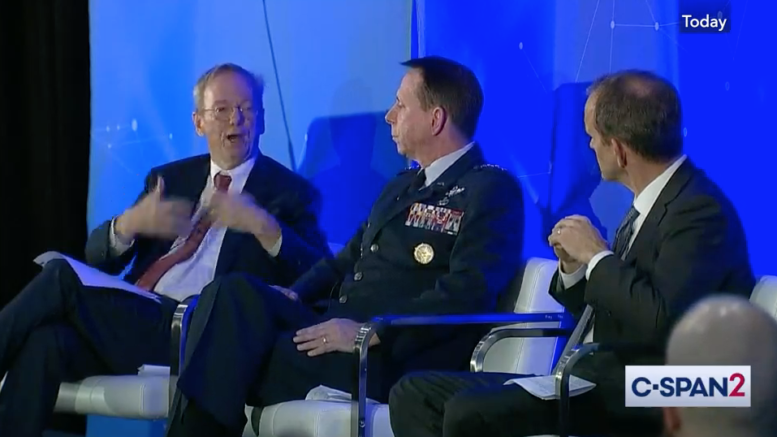 Please Share This Story!
PDF 📄
Technocrats operating within the U.S. government are stampeding to impose total surveillance networks in America, similar to those seen in China but with one twist: The race to dominance requires us to leapfrog over China’s AI and do it even better.

Eric Schmidt is the Chairman of the National Security Commission on Artificial Intelligence. Schmidt is former Chairman of Google and Alphabet, and is a member of the elitist Trilateral Commission. ⁃ TN Editor

A FOIA request by the Electronic Privacy Information Center revealed how excited the National Security Commission on Artificial Intelligence (NSCAI) is about using CCTV cameras to create a national surveillance network.

“When we talk about data resources, really the largest data source is the government.'”

The presentation discusses how the Chinese government profits from encouraging companies to use facial recognition on visitors and employees.

“Now that these companies are operating at scale they are building a host of other services (e.g. facial recognition for office buildings, augmented reality)”

In America things are not all that different.

In the United States, the Feds encourage private companies like Clearview AI, Amazon Ring and Flock Safety to use facial recognition and automatic license plate readers to identify everyone.

Under the section “State Datasets: Surveillance = Smart Cities” the presentation extol’s China’s smart city surveillance saying, “it turns out that having streets carpeted with cameras is good infrastructure for smart cities as well.”

The NSCAI says, “mass surveillance is a killer application for deep learning.

As our government applies AI deep learning to things like CCTV cameras, cellphone locations, and license plate readers, a person’s entire life can be predicted.

AI’s will use deep learning to accurately guess where you work, eat, shop, sleep, worship and vacation. Basically, mass surveillance is a killer application for knowing all there is to know about everyone.
Last week MLlive, revealed that a startup AI company co-founded by the University of Michigan is helping governments use CCTV cameras to monitor people for social distancing as indicated by a professor of electrical and computer engineering at the University of Michigan (UM):

“Two weeks ago, Corso said he and his team began tracking physical distancing at locations like Times Square in New York, Miami Beach, Abbey Road in London and the Ruthven Museums Building at UM.”

“Voxel51 is tracking the impact of the coronavirus global pandemic on social behavior, using a metric we developed called the Voxel51 Physical Distancing Index (PDI). The PDI helps people understand how the coronavirus is changing human activity in real-time around the world. Using our cutting-edge computer vision models and live video streams from some of the most visited streets in the world, the PDI captures the average amount of human activity and social distancing behaviors in major cities over time.”

What worries me is how law enforcement might use Voxel51 to fine or arrest people for not observing government-mandated social distancing.

Despite what Voxel51 claims about anonymizing identifiable data, they are still collecting their data from public/government cameras.

A 2019 article in the Michigan News University of Michigan revealed that Voxel51 uses artificial intelligence to identify and follow people and objects.

“Voxel51 has set out to overcome those obstacles with their video analytics platform and open source software libraries that, together, enable state-of-the-art video recognition. It identifies and follows objects and actions in each clip. As co-founder Brian Moore says, We transform video into value.”

I find it hard to believe that cities and governments would pay money to simply look at anonymized data. Especially when Voxel51’s business model is built around identifying people and objects on a mass-scale.
A perfect example of how the Feds view mass surveillance can best be summed up in the NSCAI presentation, “American companies have a lot to gain by adopting ideas from Chinese companies.”

Everyday, it seems Americans are being told we need more national surveillance programs to keep everyone safe.

Our governments’ obsession with monitoring everyone is only going to grow as the coronavirus grips the country. It is our job to keep these surveillance programs from being implemented or risk becoming an authoritarian state like China.