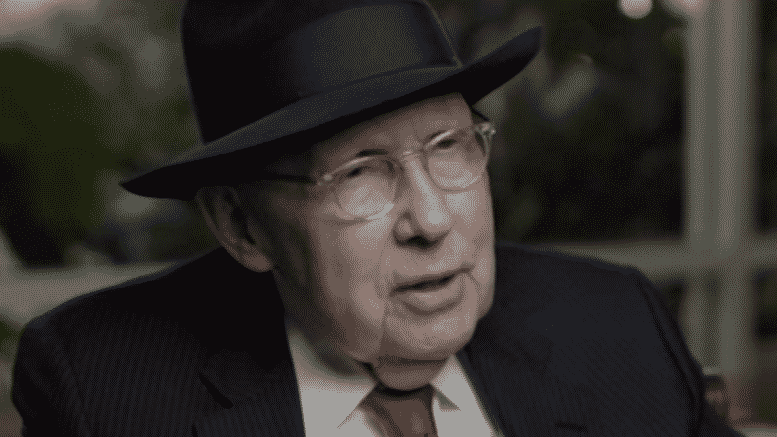 Posted By: Jon Christensen, Graham Chisholm via Bulletin of the Atomic Scientists September 17, 2020

During his 34 years in Congress, Harry Reid used every dirty political trick in the book to further his radical, progressive agenda, including Agenda 21 and Sustainable Development, aka Technocracy. Now he is in the center of an effort to subvert more conservative states into a ‘green new deal’. ⁃ TN Editor

A green new deal is emerging from the ground up in one of the most unlikely places in the country: Nevada. The leader at the center this new pragmatic environmental politics—unlikely as it may seem to observers outside the state—is former Sen. Harry Reid, who represented Nevada in Congress for 34 years.

During that time, Reid helped usher in some of the hallmark elements of what has come to be called a “green new deal.” He used federal stimulus money to support a just transition from fossil fuels to renewable energy and build a power grid for the future. He expanded public land protections and made the outdoors accessible to diverse urban residents. He settled a century-long water war with respect for Native American tribes and endangered species. At the same time, a booming gaming industry brought good-paying union jobs to the growing service economy in Las Vegas, transforming Nevada politically.

The New West and the Politics of the Environment, a feature-length documentary we helped produce for the public television environmental news magazine “Earth Focus,” makes the case for placing Reid and Nevada at the center of a lowercase green new deal struck in a politically purple region of the country.

When Reid retired, he donated his congressional papers to the University of Nevada, Reno. As the first researchers to have access to the papers, we discovered that at least half of them dealt with the environment. But when we asked Reid if he had a grand vision for a new environmental politics, he said, “Not at all.” He just did what needed to be done, what could be done, one step at a time.

That’s why we distinguish between Reid’s efforts and the comprehensive, far-reaching, and frankly left-leaning Green New Deal proposed in Congress by Rep. Alexandria Ocasio-Cortez, Sen. Ed Markey, and others. If the Democrats take control of the White House and Congress, as some observers now believe possible, there will be urgent calls for rapid and radical action. The Green New Deal will be pushed to the center of the debate. We believe a lowercase green new deal would be a better strategy even if the Democrats win—and especially if they don’t and need to govern with a divided government.

Reid’s legacy in Nevada offers lessons for crafting a green new deal that avoids the overreach and backlash that we’ve already seen in reaction to the Green New Deal, especially in purple states. Pragmatic approaches in Nevada and in other western states strongly suggest that states should be given room to work as laboratories of democracy, as Supreme Court Chief Justice Louis Brandeis suggested they could be during the Depression. This approach also provides opportunities to build constituencies in purple states for change over time.

So how do the “Green New Deal” and “green new deal” compare?

They share a commitment to a just energy transition, protecting vulnerable populations from pollution, and conserving public lands while enabling equitable access to the outdoors, economic stimulus, and good-paying jobs.

But the “Green New Deal” is radically aspirational. It wants to achieve net-zero greenhouse gas emissions in 10 years, while creating millions of high-wage jobs, investing in infrastructure and industry, promoting justice and equity, and securing clean air and water as well as climate and community resilience, healthy food, access to nature, and a sustainable environment for all. Oh yes, and provide everyone with high-quality health care, affordable housing, and a guaranteed job.

The “green new deal” is, admittedly, less ambitious—but more flexible. States are already implementing this green new deal: Thirty-four states, including Nevada, are implementing between five and 12 of the 30 state-level mitigation-related activities identified by the US Global Change Research Program in the National Climate Assessment it delivered to Congress and the President last year. There are outliers, like California, which are going all in with 25 strategies, but every state is doing something. Some cities, such as Los Angeles, have their own “Green New Deal,” and 455 cities across the country have their own emission reduction targets, as do 20 states.

In my opinion, Harry Reid has been a traitor to the USA for many decades. It is easily proven that he broke his Oath, yet was not charged with the crimes that comes from that misdeed. I also believe his actions against our constitutional republic are treasonous. Treason – Article III, Section 3 of the Constitution of the United States provides: Treason against the United States, shall consist only in levying War against them, or in adhering to their Enemies, giving them Aid and Comfort. No Person shall be convicted of Treason unless on the Testimony of two Witnesses to… Read more »