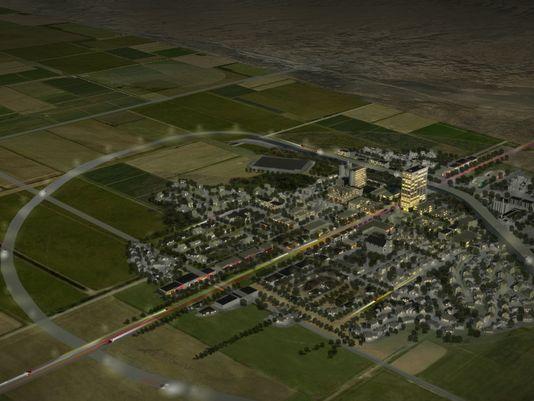 TN Note: This is the ultimate testing laboratory for a Sustainable City, where new “sustainable” technologies will be installed and tested prior to rolling out to real cities. The project lead, Pegasus Global Holdings, partners with government entities and large global corporations around the world to provide state-of-the-art technology solutions.

Pegasus Global Holdings sill plans to move forward with construction on the ghost city which will encompass roughly 18 square miles of land that will straddle the Doña Ana County and Luna County line along Interstate 10, said Pegasus Managing Director Robert Brumley. The facilty, known as CITE — the Center for Innovation, Testing and Evaluation — will stretch along a six-mile rectangle that roughly six miles north of I-10.

The project, with a potential $1 billion regional economic impact, has been in the works since 2011 and was put on hold in 2012 before being revived in 2014.

Brumley last week told the Sun-News permitting is ongoing, clients are being sought and, with any luck, construction on the 400- to 500-acre uninhabited city could begin late this year. The facility could be operational as early 2018.

Last year, CITE was idled pending approval of the Organ Mountains-Desert Peaks National Monument, Brumley said. The monument’s boundaries were set in 2014. The next step for Pegasus is securing clients to test at the ghost city, which lies outside of the monument.

The full-scale city without residents will be used for scientific research, testing everything from innovative technology to building materials and renewable energy. It will be open to private companies to test products in real-life situations and on a scale larger and more realistic than can be replicated in laboratories. Last year, Brumley said the construction investment could run as high as $600 million.

CITE will include specialized zones for developing new forms of agriculture, energy and water treatment. An underground data collection network will provide detailed, real-time feedback. The project had been evaluated and locations from the Corralitos Ranch west of Las Cruces, to Hobbs, Albuquerque’s West Mesa, Gallup and Roswell were considered, before landing in Doña Ana and Luna counties, Brumley said.