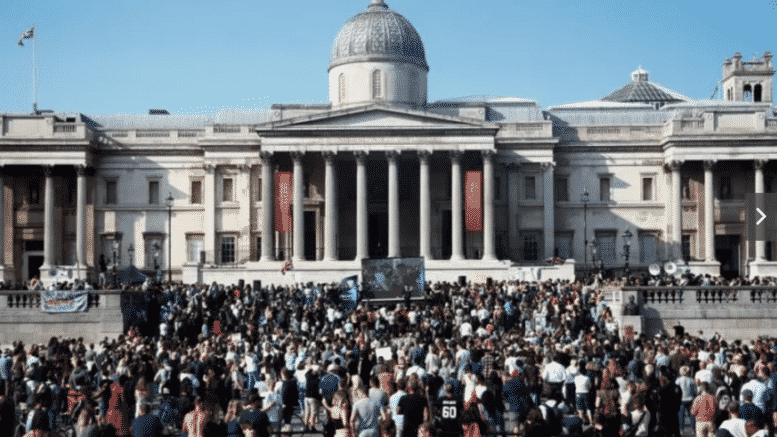 Posted By: Matilda Boseley via The Guardian July 26, 2021

Hundreds of fines have been issued and dozens charged in Sydney after anti-lockdown protesters marched and clashed with police in what one deputy commissioner called “violent, filthy, risky behaviour”.

The Australian prime minister, Scott Morrison, said on Sunday the previous day’s protests – in which thousands breached the region’s coronavirus measures to protest – were “selfish and self-defeating”, adding: “It achieves no purpose. It won’t end the lockdown sooner.”

The New South Wales premier, Gladys Berejiklian, said she was “utterly disgusted” by the scenes, saying: “It just broke my heart that people had such a disregard for their fellow citizens.”

Detectives are now combing social media and footage from CCTV and police-worn body cameras to identify and punish everyone who defied stay-at-home orders, which are now entering their fifth week.

Police said on Sunday they had issued 510 fines in the past 24 hours, with the “vast majority” coming from Saturday’s protest. At least 57 people have been charged over the unrest, including two for allegedly striking a police horse.

Victorian officials criticised similar protests in the state capital, Melbourne. The state’s Covid-19 testing commander, Jeroen Weimar, described those who took to the stresses as a “small minority having a self-indulgent tantrum”, with the Victorian premier, Daniel Andrews, warning that you “cannot vaccinate against selfishness”.

The Sydney region is struggling to contain an outbreak of the Delta variant that started in Bondi last month, amid a sluggish vaccination rollout and persistent violation of stay-at-home orders among family groups. A Guardian Australia analysis has found it could take months to recede.

Around half of Australia’s 25 million people are in lockdown across several cities and states, with anger growing at the federal government for a vaccine programme that has fully inoculated less than 13% of the population since it began in February.

New South Wales reported another 141 cases on Sunday, and two deaths, including a woman in her 30s who had no pre-existing conditions. “If anybody think this is a disease just affecting older people, please think again,” said Berejiklian.

The scenes in Sydney and Melbourne – as well Adelaide and Brisbane – were also reflected across Europe as people railed against Covid-19 measures and government restrictions aimed at improving uptake of vaccines.

In France, police deployed teargas and water cannon against some protesters, after an estimated 160,000 took to the streets in nationwide protests against President Emmanuel Macron’s health pass, which will drastically curtail access to restaurants and public spaces for unvaccinated people.

The demonstrators chanted “freedom, freedom” and carried placards denouncing “Macron, tyrant”, “Big Pharma shackles freedom” or saying “No to the pass of shame”.

Here’s a video which will stimulate your circulation. An expert who has analysed a new data set aggregating Covid data from 20 European countries has noted a number of disturbing effects. One of them appears to show a strong correlation between rising numbers of people who have been vaccinated and a corresponding increase in the number of deaths of the unvaccinated. One of his hypotheses is that due to the way these new mRNA vaccines work (stimulating the body to create spike proteins) the vaccinated are now shedding spike proteins which may be infecting the un-vaxed. If true, this means… Read more »

Global Resistance By Anti-Lockdown Protesters Explodes As Technocrats Fight Back

I’d be out there every day until they arrested me! Paul (Bible) was in prison quite a bit for his “extremist” behaviour!

Got a good laugh out of that smug, self-righteousness remark.
More power to the people to protest. One report from Australia had 140 or so people in hospital and all had the full jabs but one.

“New South Wales reported another 141 cases on Sunday“ They need to give up on the Covid lie. 141 people tested positive, yet every single test for covid has this statement in the package insert: “Positive results do not rule out bacterial infection or co-infection with other viruses.” That statement means that the test does not know what you have. A positive test is meaningless. The tests are incapable of telling you that you have a virus. You can find test documentation for Abbott here: https://www.molecular.abbott/us/en/products/infectious-disease/RealTime-SARS-CoV-2-Assay If you read the “Fact Sheet for Healthcare Providers“, you’ll see that taking the test makes… Read more »

They keep reporting the uptick in Delta cases. Note, they never mention the death rate.
I wonder why? Maybe they enjoy the propaganda value while violently trying to take away their people’s freedom.

Sticks & stones. Unless the shoe fits; don’t let their name calling hurt you. I figure, the elite have run out funds for the plebs pensions and such and need to “cull the herd” because they squander the wealth on themselves and want to hoard and control the rest.

The tyrants and their whores in the media can try to spin this but their evil Plandemic is falling apart. Destroyed by their hubris and inability to think and feel as a human being does! Now we must decide on their punishment. So glad I invested in guillotines years ago!

These stupid beauracrats refuse to accept: we will not be locked down!

Wait and see! It will happen again and everyone will comply. I watched OAN news last night, and the propaganda news which said the WHO is considering mask mandates again. Not only this the narrator said, there is nothing we can do about the communist take over of America. Really? These narrator’s are so called conservatives and “Christian”. Now you get the picture? They also featured eunuch C. Jenner A MAN dressed in his pretty dress and high heels who is against ‘critical race theory’, why feature him? The brain washing continues….”He that is wounded in the stones, or hath his privy member cut… Read more »

Not everyone. But the minority who don’t will suffer.

Disgusting? Selfish? That’s all you got–self righteous blamers and shamers? Boy, what a deluded bunch of whiners are these politicos. They have made themselves a priesthood wagging a finger at the people like Cinderella’s evil stepmother. Which brings us around to the point–they are killers of freedom of speech, movement, thought and life. They are imprisoning the public. TAKE THEM DOWN, Australia. Remove them at whatever cost and run them out of town.

I don’t think their globalist employers will go out of their way to save these NWO henchmen when the peasants storm the castle.

There is only one way to end the lockdowns. End these “administrations.” The lockdowns come from them. Not even the Bubonic Plague could force that on everyone. That’s why the surviving peasants didn’t starve. I wonder if the NWO is planning on sacrificing their puppets to the angry mob. Violent revolution will lead to many Reigns of Terror around the world. As cathartic as it would be to see mobs stone or behead these petty tyrants it would not end well for the country. With no semblance of law or order chaos would break lose. Forming small, local “shadow governments”… Read more »