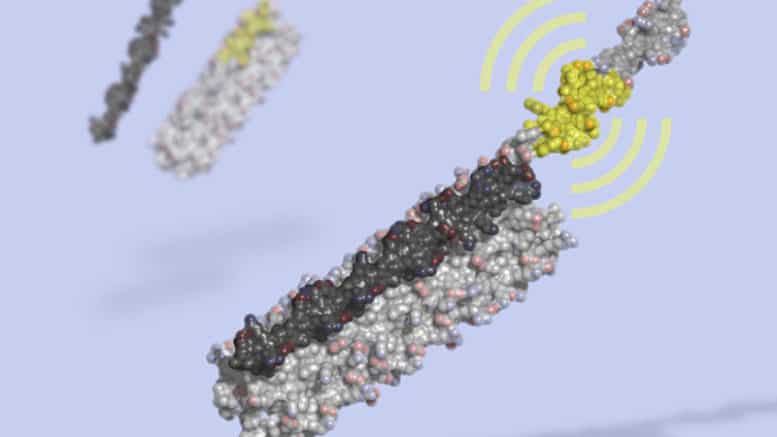 Please Share This Story!
PDF 📄
Scientists have created 100% synthetic proteins that can control how cells behave, including the death of the cell. Since proteins are the building blocks of life, LOCKR sets a dangerous precedent. ⁃ TN Editor

Scientists have invented a synthetic protein designed to control the inner workings of cells. In a pair of papers, published yesterday (July 24) in Nature, the researchers demonstrate how the tool can be used to tweak gene expression, orchestrate protein binding events, and cue functional changes in the cell in response to environmental conditions.

“Cells receive stimuli, then have to figure out what to do about it. They use natural systems to tune gene expression or degrade proteins, for example,” says Bobby Langan, a coauthor of both studies and a former graduate student at the University of Washington in an announcement. The newly designed tool—named LOCKR for Latching, Orthogonal Cage/Key pRotein—fiddles with these inbuilt systems by introducing bioactive peptides in their circuitry. The peptides only pop out when released by specific molecular “keys.”

LOCKR consists of six helixes, tightly bound to form a cage. One of the helical structures, bound more loosely than the others, can be displaced by a specific molecule, the key. When the key clicks into place, the helix moves aside and reveals a peptide customized to perform a particular function.

In their demonstrative studies, the researchers used LOCKR to trigger cell death, degrade specific proteins, and direct the movement of materials through living cells. Individual LOCKR proteins can also be connected to form circuits, systems able make changes within the cell in response to internal and external stimuli. The researchers first tested their tool in yeast, then successfully designed a modified version that works in lab-grown human cells.

“It signals the dawn of de novo designer proteins,”

This is the crux of it I believe:”…and cue functional changes in the cell in response to environmental conditions. Well, isn’t the desire to redesign homo sapiens sapiens. We can leave the reason for such a thing to future discussion. Thank you, Patrick, for your tireless efforts. Warm regards, Beth

It’s been a long time since I read ‘Molecules of Emotion’ by Candace Pert. Excellent book. She explains the functioning of proteins and their ‘keyed’ receptors. Emotion is controlled in every aspect by proteins which fit into specific receptors. These companions are created by the available genetics of the organism and others are built up over time through the experience of living. The proteins and their keyed locks are responsible for patterns of behavior–love, anger, compassion, fear, sorrow, lust, and so on. Intruding on such a delicate balance in the complex human organism has the intent stamped all over it,… Read more »