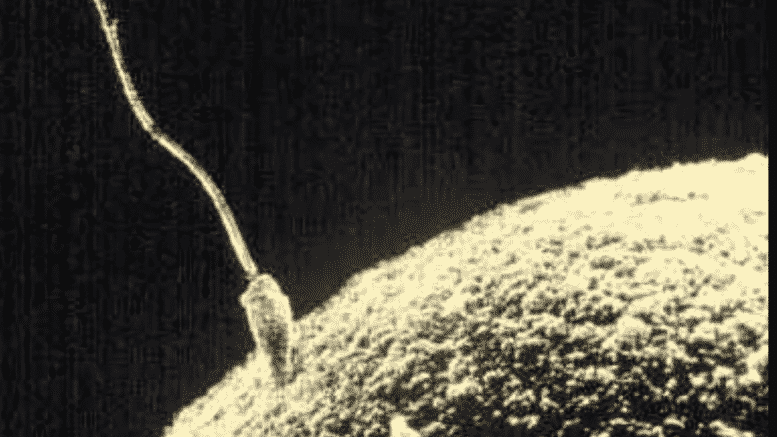 Please Share This Story!
PDF 📄
Now gene editing techniques are used to convert stem cells into active sperm cells that are efficacious for fertilization. This is the genesis of life itself, and the research is pointedly headed toward solving human infertility issues. The temptation to change a few DNA segments along the way will be irresistible. ⁃ TN Editor

Male infertility can be an awkward topic to discuss for many patients, but on a global level, a concerning upward trend has become apparent. More and more men all over the world are finding out from their doctors that they are infertile. However, groundbreaking new stem cell research by scientists at the University of Georgia is offering up some serious hope for new clinical infertility therapies in the not-so-distant future. For the first time ever, scientists have successfully created functional sperm cells in a dish using primate embryonic stem cells.

“This is a major breakthrough towards producing stem cell-based therapies to treat male infertility in cases where the men do not produce any viable sperm cells,” says lead researcher Charles Easley, an associate professor in UGA’s College of Public Health, in a university release.

The team used embryonic stem cells collected from rhesus macaque monkeys to produce immature sperm cells called round spermatids. From there, researchers were able to verify that those spermatids could fertilize a rhesus macaque egg.

In the past, scientists have been able to create sperm-like cells using mouse stem cells. However, at the end of the reproductive day, rodent sperm production is vastly different than that of humans. Up until this new research, it was largely a mystery if this technology would ever prove successful in humans.

“This is the first step that shows this technology is potentially translatable. We’re using a species that’s more relevant to us, and we’re having success in making healthy embryos,” Prof. Easley adds.

Why use rhesus monkeys?

Scientists chose rhesus macaques for this work because, for the most part, they share similar reproductive mechanisms to humans. Study authors add these monkeys are an “ideal and necessary model for exploring stem cell-based therapies for male infertility.”

In order for fertilization to occur in vitro spermatids, a number of factors come into play, including activating the egg to ensure that the fertilized egg develops into a healthy embryo.

Moving forward, the research team is planning on implanting the embryos into a surrogate rhesus macaque. This next step will help them assess whether or not embryos from in vitro spermatids can indeed produce a healthy baby. If that proves successful, the same process will be implemented using spermatid-like cells created from macaque skin cells.

Worse yet they have not proven the LIE of Evolution. Though most scientists and doctors who rule over us believe it! To mix animal and human DNA is an abomination to the LORD! They use mice DNA in most vaccines, just saying and there is more funny stuff going on behind the scenes we don’t even know of. China for instance has no qualms about it. “Neither shalt thou lie with any beast to defile thyself there with: neither shall any woman stand before a beast to lie down thereto: it is confusion (sin). Defile not ye yourselves in any… Read more »

Chicken from the egg? Where did the monkey embryo stem cells come from? Technology and EM radiation isn’t necessarily what kills sperm although EVERYTHING is a toxin when consumed in the proper quantity. It’s sedentary lifestyles, poor diet, bad health, and possibly microplastics in the bloodstream all these reduce virility. Spike protein clots blood cells in heart and ovaries. The depopulation agenda is rushing to force inject CHILDREN because 100% of humans have to be slaughtered for the technocrat utopia. It seems the survivors will be turned into low IQ, mindless cloned worker drones whose brains are used for their… Read more »

GMO Sperm? Scientists Use Monkey Stem Cells To Create Sperm (in my books years ago that stem cell sperm was the Cult agenda) – David Icke

[…] Read more: GMO Sperm? Scientists Use Monkey Stem Cells To Create Sperm (in my books years ago that stem cell … […]

If they’re so interested in solving human fertility issues, why is the planet now being shot up with human sterilization agents, i.e. the “Covid” “vaxx”.