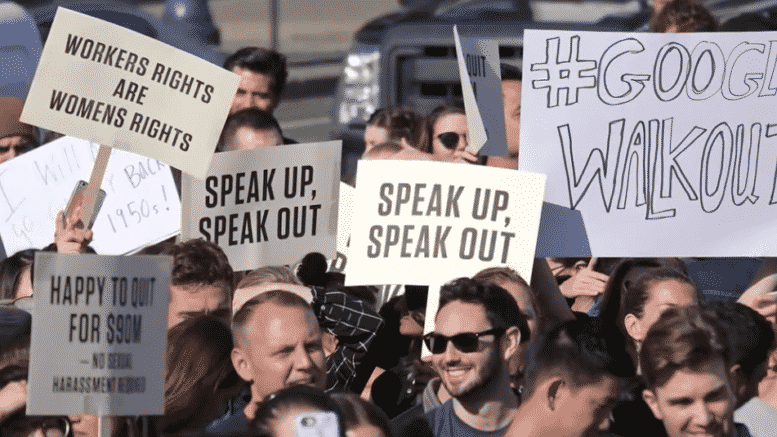 Please Share This Story!
PDF 📄
The protest was over sexual misconduct of top Google leadership but the pent up angst waiting for a spark to explode was caused by many other issues of discontent. Leadership has created an elite Technocrat culture workers are fed up with. Google can expect more turmoil in the future. ⁃ TN Editor

Google employees around the globe are taking part in a mass walkout on Thursday to protest the company’s protection of a former executive who has been accused of sexual misconduct.

The Google protest, which has been dubbed the ‘Walkout For Real Change,’ is scheduled for Thursday at 11.10am local time across the globe, one week after sexual assault allegations against creator of its Android software, Andy Rubin, were first reported by the New York Times.

Rubin denied the allegations in a tweet, saying the article contained ‘numerous inaccuracies’ and ‘wild exaggerations’.

But Rubin is believed to have received a considerable exit package in 2014, valued at approximately $90 million, and was also loaned $14 million in 2012 to buy a seaside villa in Japan.
People briefed on the transaction said the loan was offered at an interest rate of less than one percent.

‘It’s been a difficult time,’ Google’s chief executive Sundar Pichai said on Thursday during his scheduled time to talk at the New York Times DealBook conference.

‘There’s been anger and frustration within the company. We all feel it. I feel it too. At Google, we set a very high bar, and we clearly didn’t live up to our expectations.’

The demonstration on Thursday is the latest expression of a year-long backlash against exploitation of subordinates across all industries.

As the mass protest moved to the west coast, Google employees gathered in the San Francisco Bay area where the main headquarters is located in Mountain View, and Los Angeles to protest the company culture.

Shortly before noon in Los Angeles at Google’s Venice Beach location, there were about 150 people standing in the blaring heat, as temperatures felt warmer than reported in direct sunlight.

The protesters there were gathered in a courtyard area at the Google office behind a big fence.

A female employee on a microphone was speaking to the crowd, encouraging those who wished to have a turn to talk to speak up.

The woman said the company has a lot of women in it and the group would look out for them.

Thursday’s workout could signal that a significant number of the 94,000 employees working for Google and its corporate parent Alphabet Inc. remained unconvinced the company is doing enough to adhere to Alphabet’s own mantra, urging all employees to ‘do the right thing.’

A Silicon Valley congresswoman tweeted her support of the Google walkout using the hashtag ‘#MeToo’ that is now synonymous with a global movement for fighting sexual misconduct.

‘Why do they think it’s OK to reward perpetrators & further violate victims?’ asked Representative Jackie Speier, who represents an affluent district where many of Google’s employees live.

Rubin said he had no knowledge of any investigation into allegations of sexual misconduct that was being conducted at the time of his departure from Google.