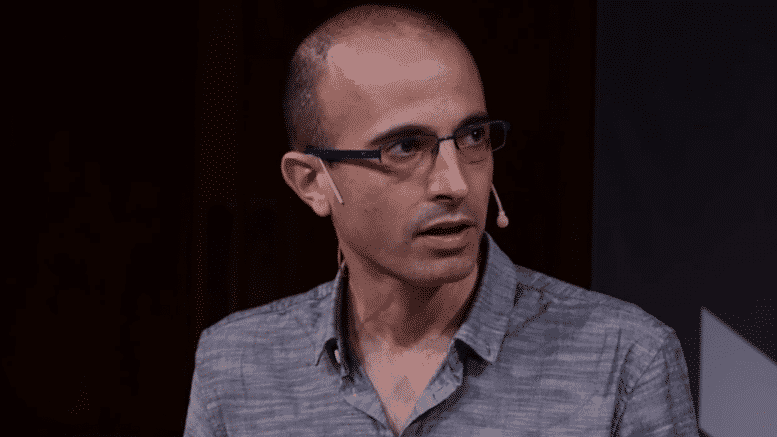 Please Share This Story!
PDF 📄
Yuval Noah Harari’s futurist view is that humans are increasingly useless as automation, AI and robots take over human functions. This is the driving view for depopulation to simply remove those “useless eaters” from the face of the earth. Harari is a principal advisor to Klaus Schwab and the World Economic Forum. ⁃ TN Editor

Harari’s remarks were made in an interview with Chris Anderson, the head of TED, published on Tuesday. He assessed widespread contemporary disillusionment among “common people” as being rooted in a fear of being “left behind” in a future run by “smart people.” Such fears are justified, he added, given his projection that emerging technologies will displace economic needs to many categories of existing work:

A lot of people sense that they are being left behind and left out of the story, even if their material conditions are still relatively good. In the 20th century, what was common to all the stories — the liberal, the fascist, the communist — is that the big heroes of the story were the common people, not necessarily all people, but if you lived, say, in the Soviet Union in the 1930s, life was very grim, but when you looked at the propaganda posters on the walls that depicted the glorious future, you were there. You looked at the posters which showed steel workers and farmers in heroic poses, and it was obvious that this is the future.

Now, when people look at the posters on the walls, or listen to TED talks, they hear a lot of these these big ideas and big words about machine learning and genetic engineering and blockchain and globalization, and they are not there. They are no longer part of the story of the future, and I think that — again, this is a hypothesis — if I try to understand and to connect to the deep resentment of people, in many places around the world, part of what might be going there is people realize — and they’re correct in thinking that — that, ‘The future doesn’t need me. You have all these smart people in California and in New York and in Beijing, and they are planning this amazing future with artificial intelligence and bio-engineering and in global connectivity and whatnot, and they don’t need me. Maybe if they are nice, they will throw some crumbs my way like universal basic income,’ but it’s much worse psychologically to feel that you are useless than to feel that you are exploited.

Harari contrasted the 20th century with the 21st while forecasting what he said is the current century’s and future economies progressively diminishing need for human beings. He said:

If you go back to the middle of the 20th century — and it doesn’t matter if you’re in the United States with Roosevelt, or if you’re in Germany with Hitler, or even in the USSR with Stalin — and you think about building the future, then your building materials are those millions of people who are working hard in the factories, in the farms, the soldiers. You need them. You don’t have any kind of future without them.

“Now, fast forward to the early 21st century when we just don’t need the vast majority of the population,” he concluded, “because because the future is about developing more and more sophisticated technology, like artificial intelligence [and] bioengineering, Most people don’t contribute anything to that, except perhaps for their data, and whatever people are still doing which is useful, these technologies increasingly will make redundant and will make it possible to replace the people.”

The claims of this degenerated facist should be made known far and wide. He is so immersed in his psychopathic views of life and mankind, that he is absolutely unaware of what he says. “We just don’t need the vast majority of the population” Heh idiot ! The vast majority of the population don’t need you either ! They never came upon this planet for the sole purpose of serving you and your caste of parasites. For you are indeed a caste of parasites who live off of others, and when you cannot live off of them, you call them… Read more »

And he’s right! It sucks but it is true. I am useless and so is the majority, I believe the controllers will launch and maybe they already have a first strike on the common people, without them realizing it. Most likely will be sterilization through whatever means, maybe cut our life spans by 20 or 30 yrs. A time bomb inside us. I’m sure they already have a separate civilization somewhere, maybe underground like a city with sophisticated technology that none of us know about, they have been spending Trillions on secret and black projects for decades by now. Idgaf… Read more »

why doesn’t harari de-populate himself now? isn’t that what he wants you to do? what a maroon.

Maybe he thinks he’s writing is something new, but it’s not new. It resounds like Charles Dickens’ novels (or, if you prefer, the PBS dramatization versions). Put the waifs in polluted, newly, then hi-tech, industrial cities, poison them, drug them, hope they die, and throw them a pence for your conscious inconvenience of their survival as you slow roll by in your sedan. The forth is the third (turd) and there’s nothing new under the sun.

Since when has a cheap knockoff snake oil salesman ever managed to produce a product that is superior to the original, given that the original is a true masterpiece? The answer is: NEVER.

Will that ever change even if this Dementor blah blah blahs us to death while waving those pasty-white claw-hands (?) tentacles (?) things around, trying to speak into existence this utterly evil nonsense? The answer is: NEVER.

Watch till the end:
https://zeeemedia.com/interview/dr-zelenko-yuval-noah-harari-who-is-the-anti-god-agenda-pushing-leader-of-the-great-reset/

Lunatic Harari: ‘We Don’t Need The Vast Majority Of The Population’ – David Icke

Lunatic Harari: ‘We Don’t Need The Vast Majority Of The Population’ - All View News

HUMANS are NOT the problem, on planet Earth! One has to realize that MOST individuals walking this planet…..are NOT HUMAN(S)! This should go without saying……Sociopath and Psychopaths are NOT HUMAN! So, we HUMANS can eliminate these DEMONS. Then we have the ‘ZOMBIES’…….these individuals are also NOT HUMAN. The Psychopathic Demons (Globalists) are taking care of the (their Demon Minions) Useful Idiots and the Zombies with the Experimental mRNA Bio-weapon Injections. This will leave WE HUMANS to eradicate what is left of the Socio/Psychopaths (this includes our ‘Overlords’/Globalists). When all is said and done……planet Earth will be populated BY HUMANS…..and it… Read more »

What a bleak view of mankind from a fundamentalist atheist. The problem with the spiritless is they only see value in that which they exploit.

These people believe they are smarter and have the answers but, as the movie Terminator showed us, at some point does the machine start removing ALL human life?

The world doesn’t need you either, Harari. Why don’t you set an example and publicly kill yourself?

[…] Yet, echoes of the ideas etched on the Guidestones are found in the belief systems of many global leaders, as well as members of our own communities. Afterall, abortion is a means of reproduction and […]

[…] Yet, echoes of the ideas etched on the Guidestones are found in the belief systems of many global leaders, as well as members of our own communities. Afterall, abortion is a means of reproduction and […]