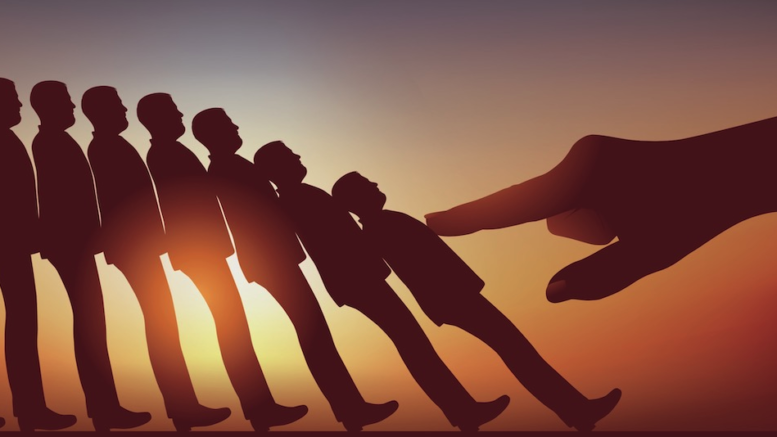 Please Share This Story!
PDF 📄
There are legitimate safety concerns over 5G tower radiation but the real danger of 5G is the implementation of the Internet of Things. Nevertheless, the speculative and unproven link between 5G and COVID-19 is causing an uproar around the world.

But, is it real, fake or purposely orchestrated? Propaganda is tricky and often difficult to sort out, but now Bloomberg is adding even more uncertainty by reporting that the social media campaign that promotes a COVID-19/5G connection is possibly driven by a state actor or other malicious group using fake accounts and fake posts.

Meanwhile, YouTube is banning all videos that link 5G and COVID-19 and Google has stopped accepting ads promoting the theory.

TN has repeatedly warned about the importance of focusing on the stated industry goal of 5G, which is to implement the Internet of Things and a grid of societal surveillance, aka Technocracy. That’s not to say that there are no legitimate health concerns over 5G, but for those who have focused only on those issues, we now see how an entire movement can be reduced to a bowl of quivering jello within a matter of weeks.

I have watched and studied disinformation campaigns like this for over 40 years, and the most successful ones have this in common, namely, nudge the resistance too far into the extreme (whichever direction they might be leaning in the first place, left or right) so that they lose all credibility and finally their movement collapses in on itself.  ⁃ TN Editor

A conspiracy theory linking 5G technology to the outbreak of the coronavirus is quickly gaining momentum, with celebrities including actor Woody Harrelson promoting the idea. But the theory is also getting a boost from what some researchers say is a coordinated disinformation campaign.

Marc Owen Jones, a researcher at Hamad bin Khalifa University in Qatar, who specializes in online disinformation networks, analyzed 22,000 recent interactions on Twitter mentioning “5G” and “corona,” and said he found a large number of accounts displaying what he termed “inauthentic activity.” He said the effort bears some hallmarks of a state-backed campaign.

“There are very strong indications that some of these accounts are a disinformation operation,” Jones said.

Jones said the campaign uses a strategy similar to Russia’s Internet Research Agency, which was behind a disinformation campaign during the 2016 U.S. presidential campaign. But he said he hasn’t yet concluded that Russia, or any other government or organization, is behind the effort.

Blackbird.AI, a New York-based company that monitors online disinformation campaigns, said it had in recent weeks identified a surge in the number of social media posts promoting the 5G conspiracy theory. In the previous 24 hours, there had been more than 50,000 posts about the topic on Twitter and Reddit, Naushad UzZaman, the company’s chief technology officer and co-founder, said on Wednesday.

There has been a “significant uptick in inauthentic amplification” of posts on social media linking 5G to the coronavirus, UzZaman said, indicating that there could be a coordinated campaign and bot accounts involved. The company says it uses a system that analyzes language, communication patterns, post volumes and bot activity in order to identify social media posts that are “inauthentic” and attempting to manipulate online discussion.

Blackbird.AI hasn’t determined who is behind the effort, nor have the researchers at the Global Disinformation Index, a non-profit that tracks disinformation online. “We’ve definitely seen plenty of organized disinfo around 5G-coronavirus,” said Danny Rogers, the index’s co-founder.

A big meme shift happened when Dana Ashlie posted a video on her youtube channel discussing correlations between a certain EMF frequency thought to alter oxygen availability; Wuhan being the first large citywide installation of 5G towers; and respiratory symptoms of COVID-19. That video went viral. There has also been further discussion of 5G installations in locations hit early and hard by the virus such as Italy, Iran, and Princess cruise ships (5G via satellites). What Ashlie didn’t know at the time is the virus that causes COVID-19 has proteins on it that grab and dislocate iron from hemoglobin causing… Read more »

There’s a natural connection between 5G and Corona-chan, which is people who fear an invisible monster invading their body, so there doesn’t need to be artificial coordination.

Its not important who are behind accounts. What is important is whether there is any link between 5G and CoronaVirus.
5G microwaves is said to eat oxygen in the air and thus set to cause strangulation of the lungs, which is the symptoms of CoronaVirus.

It doesnt matter who, but whether this is a factual truth or not.

I recommend Blackbird.AI and GLOBAL DISINFORMATION INDEX start monitoring the mainstream news, as that should keep them busy enough, while leaving social media alone.
When you look at the names behind these organizations, well that speaks volumes to me.

No one can demonstrate a properly conducted scientific process of isolation of a unique corona virus. That is a fundamental problem. Almost no one is dealing with the premise being a house of cards. If the virus exists, so be it, but the virus and its causal link to a disease, so far, has NOT been isolated by using Koch Postulates. another issue is that even critics of the overall narrative(most of them) have failed to study the science of germs and the fact that the Germ theory of disease is GROSSLY oversimplified. Even Pasteur himself admitted that his life’s… Read more »