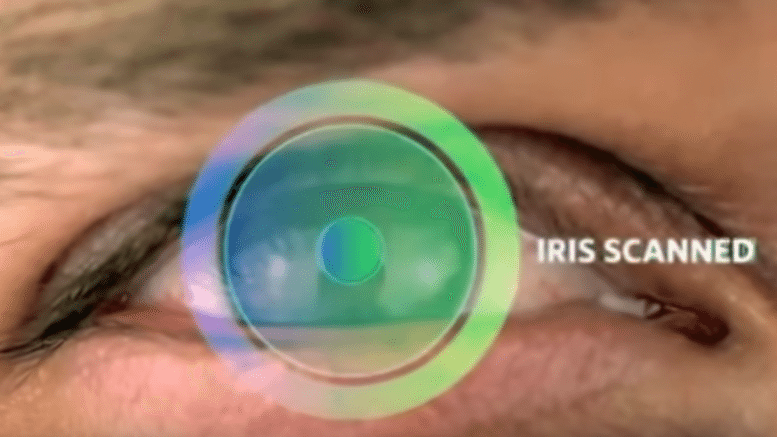 Identification by iris scanning joins other biometric facial scanning to provide identification comparable to your DNA. Technocrats will embed this technology in every conceivable application. ⁃ TN Editor

Lazaro Torres, a die-hard Miami Heat fan, was scurrying to reach his seat before tip-off one night last month when he hit an all-too-common roadblock: Two dozen fans stirring impatiently in the security-check line. Not a problem. He slid into a special entrance line, laid two fingers on a print scanner and, with the Heat’s rapid blessing, cruised into the arena.

Attending a game used to be a low-tech pleasure: Buy a ticket and grab a bleacher seat. Now, with metal detectors and bag checks standard at almost all major sporting venues, companies have begun offering biometric and other tools to create the equivalent of express security lanes like those in airports. Those fingerprints and iris scans also allow teams to track fans’ behavior and purchasing habits, helping them rake in more revenue and fatten profits while triggering at the same time the privacy concerns that dog this sort of technology in other parts of the economy.

Clear, owned by Alclear LLC, also provides similar security services at 16 airports, where passengers can get fast-tracked for $179 a year. At stadiums, teams pay a licensing fee and fans nothing.

Security advocates and the U.S. Department of Homeland Security have been calling for stronger protection at large gatherings since the Sept. 11, 2001, terrorist strikes. Attacks such as the Boston Marathon bombings in 2013 that killed three people added urgency, said Lou Marciani, director of the National Center for Spectator Sports Safety and Security at the University of Southern Mississippi.

“Between training and processes and technology, we are trying our darnedest to harden arenas and marathons and high school sports,” Marciani said.