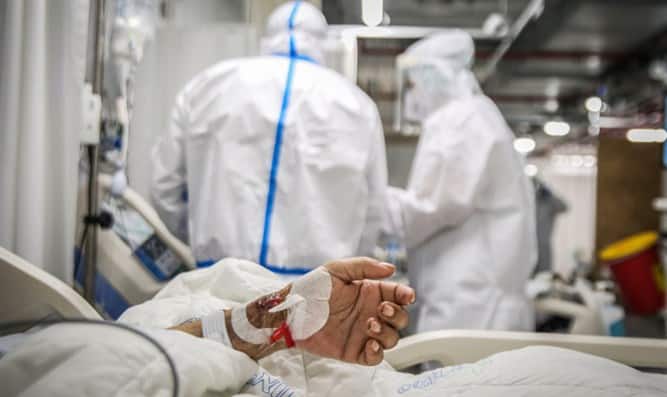 Please Share This Story!
PDF 📄
A simple and straightforward status report of COVID activity shockingly reveals that “Among seriously ill patients, 35% are not vaccinated, compared to 61% who are fully vaccinated and 3% who received one dose of the vaccine.” Do the math.

As a group, the unvaccinated only comprise 35 percent of the seriously ill. ⁃ TN Editor

A total of 5,755 new cases of the coronavirus were reported across Israel Tuesday, according to data released by the Health Ministry Wednesday morning,

That marks a decline from Monday, when 6,275 new cases of the virus were diagnosed.

The percentage of tests coming back positive fell from 4.89% on Monday to 4.59% Tuesday.

There are now 38,942 known active cases of the virus in Israel. A total of 694 patients are hospitalized with COVID, up from 648 Tuesday morning.

Of those, 400 are in serious condition, up from 394 on Tuesday and 379 on Monday. That is the highest number since March.

The total number of COVID-related fatalities is now 6,580, including 11 deaths reported Tuesday and four Wednesday morning.

It is no wonder, PLEASE spread as fast as you can, it is in german though, but the pictures of completely changed human blood AFTER the covid gene manipulation injections speak for themselves:
https://uncutnews.ch/den-covid-19-impfstoffen-auf-der-spur/

I would love to hear an English translation. There is no mode on the video for that action. Can you provide a translation? The information should also be known in English. I do see the changes but do not understand the details which are important.

And THOSE 35% were INFECTED FROM those who have gotten the EXPERIMENTAL (BIO-WEAPON) INJECTION(S)!!!!!!!!!

Of course, we can’t believe any numbers associated with their diagnoses labeled covid deaths or illnesses. The State of Israel has rabidly lied about their numbers as has the USA and other Western countries from the beginning. Those medical kickbacks are great, huh boys!? Go-along physicians and profit-centered care facilities have become death dealers in covid, no longer deserving of the title ‘healers’. The physicians who are actually healing people and refusing to give the covid shot have been/are disenfranchised, intimidated, stripped of licenses, thrown out of those facilities and silenced at all costs by the operating worldwide fascist barricade.… Read more »