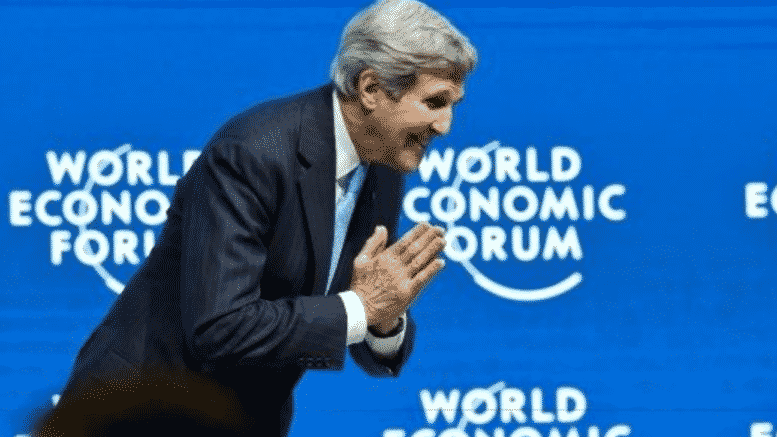 It’s launch time for Technocracy’s coup d’etat and it’s coming in less than one month from now. One of the strongest American advocates for the Great Reset is former Secretary of State John Kerry, who stated “a reset is more important than ever before.” ⁃ TN Editor

The World Economic Forum (WEF) has revealed its Davos 2021 Agenda, confirming the annual gathering of political and business elites next month will be a digital event heralding the public unveiling of its Great Reset Initiative.

In a preview to the digital “Davos Dialogues”, the WEF asserts, “The time to rebuild trust and to make crucial choices is fast approaching as the need to reset priorities and the urgency to reform systems grow stronger around the world.”

The need for “global leaders to come together to design a common recovery path and shape the Great Reset” in the post-cornavirus world has never been stronger, it adds.

It then continues to set out the exact plan of WEF action to reshape the modern world in a pattern of its own design. The WEF says:

An entire week of global programming will be dedicated to helping leaders choose innovative and bold solutions to stem the pandemic and drive a robust recovery over the next year.

As Breitbart News reported, there has been much discussion as to the exact form the much-discussed Great Reset Initiative will take.

He said President-elect Joe Biden is ready to rejoin the Paris Climate Agreement — which threatens to eliminate more than a million American jobs — and be a driver of the ”Great Reset” whereby unelected global bureaucrats are looking to alter the world’s economy by abolishing money, private property, and democracy for the sake of a “New World Order,” according to James Delingpole.

“The notion of a reset is more important than ever before,” Kerry said. “I personally believe … we’re at the dawn of an extremely exciting time.”

Kerry dismissed the U.S. rejoining the Parish Climate Agreement as being “not enough.

No one in their right minds expect anything good from the global reset/agenda 2021/2030 snakes. Without divine intervention. The only thing I expect from globalists and technocrats is misery, suffering, death and destruction. They are leopards who in my opinion are too rebellious and disobedient to God to change their stripes. I doubt that any individual whom God has turned over to a reprobate mind, and have crossed the line of God’s saving grace will ever stand before God in a white robe of righteousness. I reserve my prayer time for those in the Body Of Christ and for those… Read more »