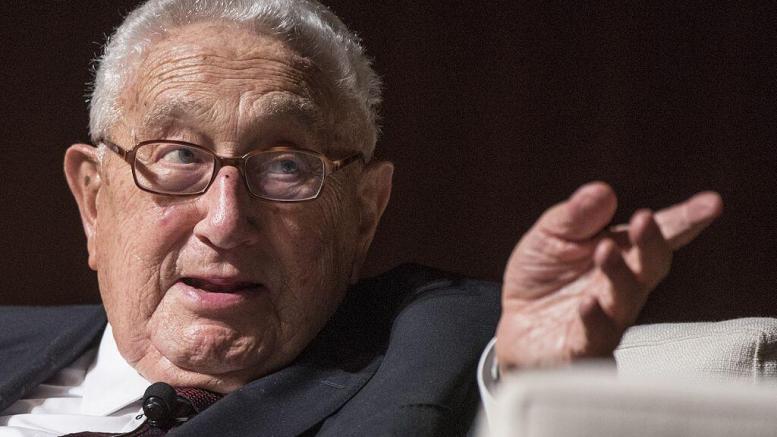 Please Share This Story!
PDF 📄
Henry Kissinger turns 97 soon, and is still a paragon of globalist thinking and impact. He is an original member of the Trilateral Commission that rebirthed Technocracy in 1973 and then fed it to the United Nations as Sustainable Development and Agenda 21. ⁃ TN Editor

Henry “Kiss the Ring” Kissinger has weighed in on the global impact of COVID-19. And the granddaddy of one-world insiders doesn’t disappoint. He says the coronavirus will “forever alter the world order.” [See The New American.]

But what does the Godfather of the NWO really talk about behind closed doors? Wouldn’t you love to be a fly on the wall?

“And they thought 9-11 was big? Wait till they see what we have in store with this one!”

Yes, Bill Gates has surely made one of his Zen masters proud, as he sits ready and waiting with a cocktail of mandatory vaccines, at least one promising to be specially tailored for COVID-19. Kissinger’s old communist buddies in China are also elated with the crap storm they have unleashed.

I can see him now, starting his day with new energy that defies his age. Kissinger, about to turn 97 next month, paying homage to his departed brothers – men like David Rockefeller, Zbigniew Brzezinski and Pappy Bush – his servants laying out his morning coffee and danish. His team of researchers arrive shortly after with a daily briefing on what the other side is saying about COVID-19 and the need for a mandatory vaccine embedded with a personal nanochip marker for every human being on the planet.

He calls his buddy Bill Gates to advise him on how to handle the latest interview with Chris Wallace.

“I could care less about what Chris Cuomo or Don Lemon are saying. To hell with CNN,” he barks. “I want to hear what’s being said on Fox. I want to hear Limbaugh, Levin, Hannity… are they on board yet?! We’ve had the others in our pockets for years.

“I want the conservatives, dammit!”

“What are you doing to deliver the conservatives? Those despicable ones who call themselves patriots! Those are the ones I want!”

“Um, we can assure you, Sir, we’re working on that, working hard,” his chief assistant nervously responds. “We’ve got Dr. Fauci and Dr. Birx standing right next to the president. We’ll have them eating out of our hands, Sir.”

“Good. And if you can deliver the Christians, even better!”

With each new conservative TV host, each new columnist, each new radio talker who buys into the B.S. propaganda shoveled out by the United Nations WHO and the NWO Gates-funded Drs. Fauci and Birx, he laughs a little louder.

“Stay locked down in your stupid little middle-class homes, practice social distancing, washing your hands incessantly, wearing your facemasks, fearing not only the virus but each other! I love it!”

They laugh some more, Kissinger and his globalist buddies. They laugh a laugh that is sounding more hysterical by the minute, driven by the demons from within their souls.

I keep waiting for conservative America to hear the sound of evil in these propaganda talking points being shouted from the telescreens. I keep waiting for them to rise up in unison. To put an end to this fractured movement of disunity and distraction. To organize a mass march on Washington, D.C., or maybe their state Capitols.

Silence is all I hear coming from our side, with a few lonely voices trying to break through the wall of propaganda. Laura Ingraham. Daniel Horowitz. The New American. Gateway Pundit. LeoHohmann.com. Tucker Carlson is starting to get it. A few others, too.

Let’s pray we get some reinforcements, and soon.

Mass march to Washington and posters wont do it either.