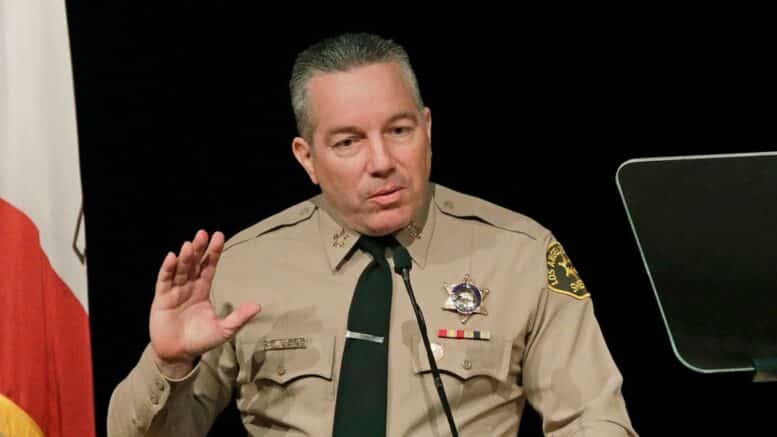 Please Share This Story!
PDF 📄
LA  County Sheriff Alex Villanueva continues to make waves by calling out the LA County Board of Supervisors for contracting with a COVID testing company with strong ties to China, that blatantly states collected DNA data will be used and stored outside of US borders. Technocrats in China have plainly stated that they are building the largest DNA database in the world. ⁃ TN Editor

LA  County Sheriff Alex Villanueva has notified the LA County Board of Supervisors that LASD will not work with a China-linked genetics firm hired by the county to conduct Covid-19 testing and registration, after the FBI shared “very concerning information” about Fulgent Genetics Corporation – which was awarded a no-bid contract for the work.

“This letter is to inform you the Los Angeles County Sheriff’s Department (Department) will not participate in COVID-19 registering or testing with Fulgent Genetics Corporation (Fulgent), due to the fact the DNA data obtained is not guaranteed to be safe and secure from foreign governments and “will likely be shared with the Republic of China,“” wrote Sheriff Alex Villanueva in a Monday letter.

Of note, China’s ambitions to build the world’s largest DNA database are no secret to anyone listening to Kyle Bass or the Wall Street Journal.

Villanueva writes that on Nov. 24 he was contacted by the FBI’s Weapons of Mass Destruction Coordinator, who shared “very concerning information” about Fulgent.

“I was shocked to learn Fulgent had strong ties with BGl2, WuXi3, and Huawei Technology 4 , all of which are linked to the Chinese Academy of Medical Sciences, the Peoples Republic of China (PRC) State Council and are under the control of the PRC.” the letter continues. “I was even more shocked to learn Fulgent made no attempt to disguise the fact they willuse the genetic information obtained in future studies.”

NEW: The L.A. County Sheriff has notified L.A. County that LASD will not work w/ a genetics firm the County hired for mandatory COVID-19 testing/registration of County employees after he received a recent briefing from the FBI warning him about the firm’s links to China. @FoxNews pic.twitter.com/WHtFcEZlPI

Villanueva then blasted officials over how Fulgent was hired in the first place, writing “I am deeply concerned as to the vetting process which either failed to discover this, or
discovered it, but chose to ignore it. A simple internet search would have uncovered all
of the above facts.”

“Entering into a no-bid contract with Fulgent Genetics and allowing them to have the DNA data obtained from mandatory COVID-19 testing, for unknown purposes, has shattered all confidence my personnel have in this entire process under the County mandate. Many personnel have long suspected this information was being used in an unnecessary manner due to a rushed mandate that we now know will have long-term unintended consequences that will not be fully known for some time.

The FBI felt strongly enough regarding Fulgent being used to test County personnel that they held an emergency briefing to disclose their concerns.” -LA County Sheriff Alex Villanueva

According to FoxLA‘s Bill Melugin, “multiple L.A. County employees” have contacted him in recent weeks “furious” about Fulgent’s sharing of medical information.

Over the last several weeks, I’ve been contacted by multiple L.A. County employees who are furious about Fulgent Genetic’s disclaimer about sharing their medical information outside the United States. All 100,000+ L.A. County employees mandated to register with Fulgent. pic.twitter.com/htqFTE9VXJ

You must view this video. It went viral in the EU and has only recently been subtitled for English speakers. It’s the kill shot of information. Please watch it to the end. The doctor reaches the summit of his presentation by making definitive statements that should be heard. He supports the Spanish study but because of his expertise, education and experience in several disciplines such as chemistry he was able to extract the primary cause of those who are dropping dead in front of us.  Dr. Noack was murdered within 24-hrs of this video going viral in Austria/EU. He died to provide the… Read more »

A “no-bid” contract is code for “the fix is in”. I’d love to see the money trail from China to the LA County Board for this scam. There should be no doubt that the data will flow back to Beijing. It is well known the Chinese are grabbing up as much DNA data as possible.

Remember that Feinstein has built some strong Chinese contacts and had a CCP spy as her driver for 20 years. Rep. Swallowell was bagging a CCP spy named Feng Feng.

I think it funny, that the Globalists’ Minions (such as this ‘sheriff’) are starting to come out ‘against’ these measures. Have they finally realized that they will NOT get a seat at ‘The Adults Table’ (like at Thanksgiving), and that their MASTERS want THEM DEAD TOO?!?! Have they FINALLY realized that they are ‘nothing special’…..JUST LIKE THE REST OF US PEE-ONS?? lololol

just fora thought…. Is Fauci maybe woven i to this fabric??? Probably so!!

Some of us know by now that satanists have figured out various ways to cause genetic mutations in every living organism on earth. Not for good or noble purposes but with evil intent. I believed at one time that genetic research was being used for the good of humanity. Where we are at today proves that the destruction of the human, plant and animal genome was the goal all along. DNA I hear can mutate for better or for worse without third party human intervention. Seems like quacks either forget this fact or maybe creating monsters and freak diseases is… Read more »