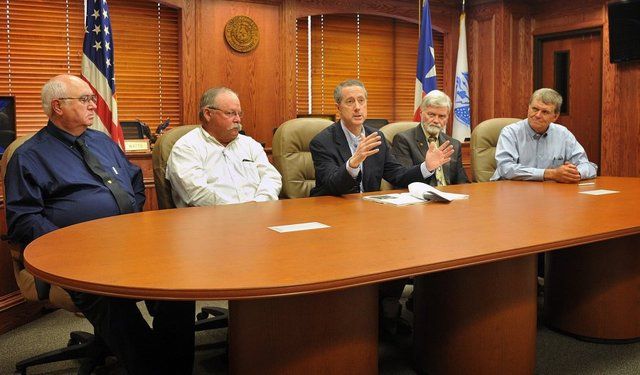 Please Share This Story!
PDF 📄
TN Note: The BLM asserts itself as the ultimate authority on what land belongs to it and what land doesn’t belong to rightful owners. It’s fascist tactics are being fiercely resisted by landowners across the nation.

A group representing Texas landowners and Wichita, Wilbarger and Clay counties officially filed a lawsuit Monday night in U.S. District Court of the Northern District in Wichita Falls against the Bureau of Land Management, contesting the federal agency’s claim to owning portions of Texas land dating back to the Louisiana Purchase in 1803.

“It is well established that Texas begins at the southern bank of the Red River. By definition, the ‘bank’ is the sliver of land that separates the sandy ‘[river]bed from the adjacent uplands.’ ‘On the valley side of the bank is vegetation and on the river side is bare sand.’ State of Okl. v. State of Tex., 260 U.S. 606, 634 (1923),” The Texas Public Policy Foundation wrote in its brief to the courts.

The suit alleges the federal government’s “ownership of property is limited to bottom-half of the sandy riverbed outside of Texas.

Nonetheless, BLM asserts that its boundary extends well past the riverbed into Texas and, in some instances, more than a mile outside of its lawful territory.

In doing so, BLM has seized private property and infringed upon the sovereignty of the local county governments.”
Included in the suit are individual landowners, four from Wichita County, three from Clay County and one from Wilbarger County.

There was no request for a monetary award mentioned in the lawsuit at first review by the Times Record News.

The BLM has maintained that the entire parcel of land along 116-miles of the Red River in question has been public land managed by the federal government since the Louisiana Purchase in 1803, confirmed time and again with Spain and the Supreme Court of the United States rulings.

SCOTUS commissioned Cols. Arthur Stiles and Arthur Kidders in the 1920s to determine a boundary between Texas and Oklahoma to finally decide where the property line of the federal government and Texas landowners met.

Although the survey was not able to determine a permanent boundary because of the shifting waters and ground along the Red River, the lawsuit says of the SCOTUS decision and commission, it does establish the gradient boundary by which to determine borders and, ultimately, the boundary of a Texas landowner’s property.

The method of determining boundary was done by Kidder and Stiles, and was later published by Stiles in the Texas Law Review in the 1950s.

The BLM began a scoping operation in 2014 to find out what they should do with this public land and part of formulating their Resource Management Plan for the area, something that hasn’t been done since the mid-1990s.

This has tied the hands of landowners, the suit alleges, to make improvements or sell of all or portions of their land.

The Times Record News was not able to get a response from the BLM on the suit given the late notification of the lawsuit.