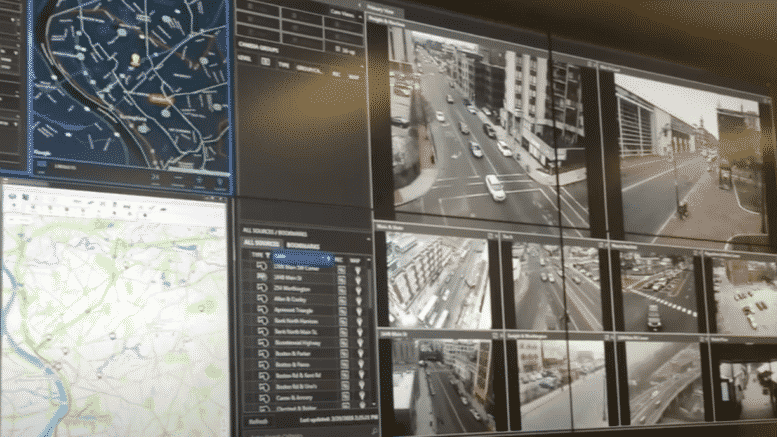 Please Share This Story!
PDF 📄
As students get back to class, their every movement will be monitored in real-time by cameras with facial recognition, license plate readers, weapon detectors, vape detectors in bathrooms, emotion analyzers, etc. This essentially turns the school into a panopticon prison. ⁃ TN Editor

Now that public schools are reopening (just in time for summer vacation) what are officials worried about? Is it face-to-face learning? Is it in-person interactions with students? Nope, it is mass surveillance and how to let Real-Time Crime Centers (RTCC) monitor students under the guise of public safety.

The school committee took a half hour to decide that the best way to make students and faculty feel safe is to allow Big Brother to monitor them in real-time.

It is becoming more apparent to even casual observers, that our public schools resemble our prison system. Our schools are increasingly tied to the school-to-prison pipeline with CCTV cameras watching a students’ every movement; to weapons detectors at entrances, to vape detectors in bathrooms, and to police officers waiting for students to commit an infraction.

Will tying school surveillance cameras to RTCC’s be the proverbial straw that broke the camel’s back?

The Springfield Police Department’s Real-Time Analysis Center (R-TAC) uses BriefCam’s surveillance technology to monitor the public and students. As the video explains, the police use BriefCam’s license plate readers to ID and track innocent motorists without a warrant. BriefCam is also well-known for its facial recognition capabilities.

Is it a coincidence that police department RTCC’s are closely linked to Fusion Centers?

“Technologies such as networked cameras, automated license plate readers, and gunshot detection are deployed around the clock, as are the tools to process this data, such as predictive policing software and AI-enhanced video analytics.”

“The technologies, working in concert, are being consolidated and fed into physical locations called Real Time Crime Centers. These high-tech hubs, filled with walls of TV monitors and computer workstations for sworn officers and civilian analysts, not only exploit huge amounts of data, but also are used to justify an increase in surveillance technology through new data-driven or intelligence-led policing strategies.”

The “Atlas of Surveillance” said R-TAC or the Springfield RTCC opened in 2018 and a Masslive article revealed that the police have been warrantlessly monitoring people at the MGM Springfield, Union Station, and even some Pride stores for three years.

As MassLive pointed out “the Springfield Police Department, was the subject of a recent Department of Justice (DOJ) review. In a report released last summer, the DOJ alleged a pattern of excessive force and civil rights violations by Springfield narcotics officers.”

The last thing families need to worry about is a police department with a history of abuse monitoring their children in real-time.

The new proposal allows Springfield’s RTCC to log into the school’s surveillance system without a warrant.

“Under the proposal, police personnel at the R-TAC would be able to log onto the school system and view footage immediately. Walsh said the proposal includes strict guidelines — limiting such use of the system to emergency situations, and limiting access to analysis center staff and a group of detectives and supervisors. Police will be required to log each time they access the system, documenting who signed in and why.”

The Springfield police cannot wait to use BriefCam to monitor students.

“There’s a lot more it can do. It’s a phenomenal tool,” said William Schwarz, director of the Springfield Police Crime Analysis Unit, which oversees the R-TAC.”

As school committee member LaTonia Monroe Naylor warned, “the policy has too many gray areas that need clarification.”

It is stories like these that makes one roll their eyes in disbelief as tone-deaf officials ignore calls to stop over-policing and mass surveillance.

It’s amazing to watch SLAVES. it really is!

2017 video https://www.youtube.com/watch?v=yB0CwcvUszo&ab_channel=AlisonMcDowell
Alison McDowell @Philly852 Scrappy mom standing against AI.
Cosmic Dance Greater Than Cyborg Avatar Capitalism
YT Channel: https://youtube.com/channel/UCQdN0TfBHaXbDF5EDEgglfQ
wrenchinthegears.com Joined August 2010 0 Following 10K Followers
“I would argue it’s not actually about crypto and the technology and that this is about something very different.”
@_whitneywebb Timestamp 8 minutes 7 seconds. You decide. Have I only been worried about blockchain lately?
https://vimeo.com/556146346
https://wrenchinthegears.com/2017/01/16/how-did-the-department-of-defense-end-up-in-my-childs-classroom/

Thanks for this excellent article. What a disastrous dystopia we´re in for.

No surprise, given the State of MA has stood on the soap box of covid fear, not only complying but ramping up fear over the covid year for their population. MA is handing the New World Order, now the Corona World Order, a compliant population in which to operate. Was that the elected officials’ original goal–soften them then betray them and everything for which the Constitution stands? Or has this been an outgrowth of simply stupidity on their part? One has to question motives when the agency that was created to be “an army on US soil” is involved in… Read more »

[…] US Fusion Centers are often psychologists, and trained in psychological warfare–and here is just one example of how these centers are being used to literally surveil, profile, database, and control children […]