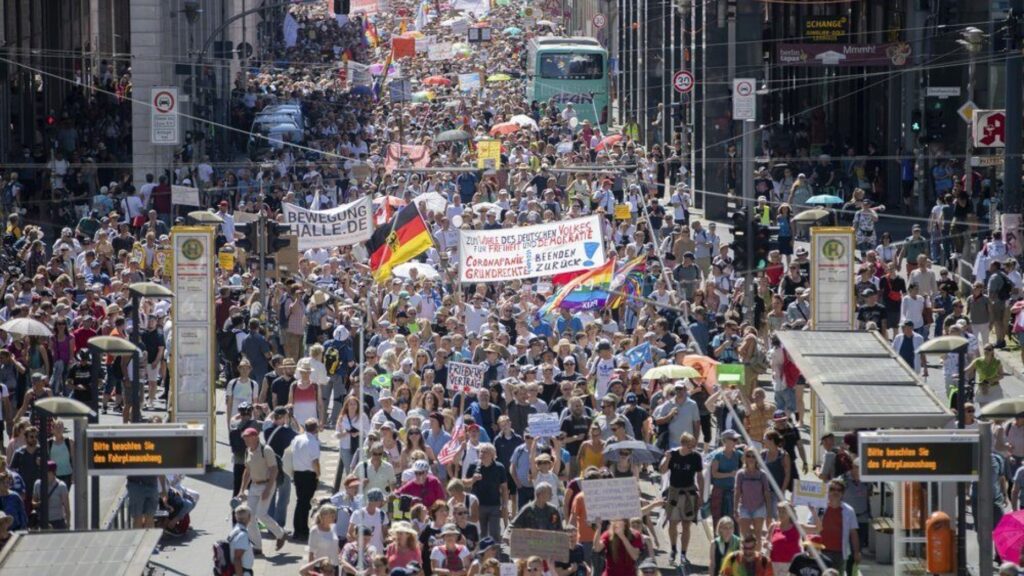 Many citizens in Germany are fed up with national mandates to wear face masks, and have shown up in the streets with tens of thousands of protestors. They were heavily criticized by the government and leaders are being charged with violations. ⁃ TN Editor

In April face masks became mandatory across German states in shops and on public transport in a bid to slow the spread of Covid-19.

However, now a row over whether they should remain compulsory is breaking out across the Bundesrepublik.

It comes after politician Harry Glawe in the northeastern state of Mecklenburg-Western Pomerania, spoke out in favour of getting rid of the mask requirement, or Maskenpflicht as it is known in German, to help the pandemic-hit retail trade.

“If the infection rate stays so low I can’t see any reason to maintain the duty to wear masks in shops,” said the state’s economy minister, who is a member of Angela Merkel’s Christian Democrats (CDU).

“I can fully understand why the retail sector is so impatient for us to end compulsory mask wearing,” he told Welt am Sonntag.

Glawe told the newspaper he expects the state to announce an end to mask wearing in shops during a meeting of the state government on August 4th. He added though that social distancing rules – 1.5 metre distance is required between people not from your household in Germany – will likely be kept in place.

Germany’s Health Minister Jens Spahn said he was opposed to the idea of getting rid of the requirement to wear masks.

Spahn wrote on Twitter that he understood “impatience and the desire for normality”. But the coronavirus is “still there”.

Where distance can not always be ensured in closed rooms, the mask is “necessary”, wrote Spahn.  However, amending coronavirus regulations is up to individual states rather than a federal decision.