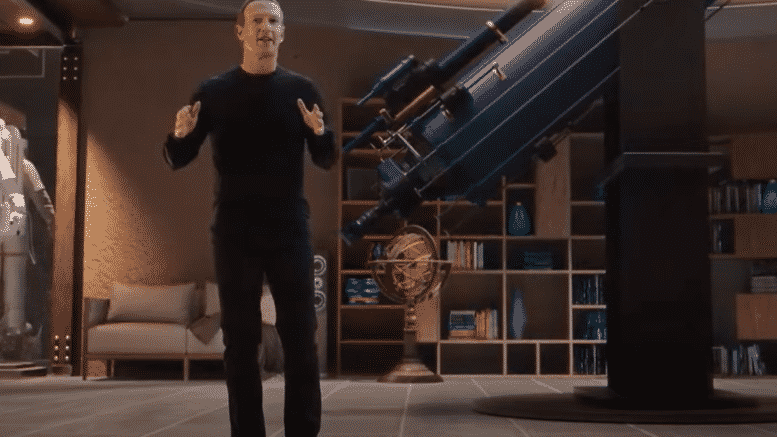 Mark Zuckerberg hasn’t lost his mind, but he wants you to lose yours… to the metaverse. He is investing billions of dollars to make sure that his rebranded company, Meta, will be the industry leader in the same way that IBM dominated the computer industry for many decades.

Other major Big Tech companies are jumping in. Gaming software development companies, chip manufacturers and hardware developers. Together, it will create an entirely new industry that will run alongside Artificial Intelligence: Artificial Reality.

It will dominate the workforce, the social world, the classroom and education and entertainment.

It will fulfill the dream of Transhumanism to live forever as an AI program embodied in a personalized, stateless avatar. Ray Kurzweil, head of engineering at Google and founder of Singularity University, should be dancing in the street because the long sought-after digital resurrection of his father is coming.

The metaverse will suck every byte of data from your life to empower what Dr. Soshanna Zuboff calls “Surveillance Capitalism”. That is, every blink of your eye, every facial expression, every facet of emotional and physical states, etc. The metaverse will know far more about you than you will ever know about it.

When Mark Zuckerberg says “The future is private”, he is lying through his pearly white teeth. In fact there will be zero privacy. Nor will you be compensated for voluntarily giving yourself up to this artificial Utopia.

The metaverse will not necessarily tell you what to think, but it will entirely change the way you think. It will rearrange your logic circuits in a way that you cannot distinguish between what is real and what is not. Your metaverse will become as real to you as the nose on your face.

Many people have already likened the metaverse to the 2018 movie, Ready Player One. In it, a dystopian world of poverty and misery is turned into an instant Utopia by merely putting on your virtual reality headset. This is quite reminiscent of the World Economic Forum’s pronouncement that “You will own nothing and be happy.”

How will the metaverse transform the economic system of the world? Zuckerberg sees a blending of real and virtual economies. There will be interchangeable currencies. You might buy a pizza in the metaverse but have it delivered to your house. Or vice versa. Of course, Zuckerberg also wants to create and control the digital currency.

To enable the metaverse, communication is everything. 5G wireless speeds will only scratch the surface. It will be 6G that really fires it up.

Of one thing you can be absolutely certain: the societal discussion on the metaverse is just beginning.

The Eiffel Tower in Paris is for sale. Everybody interested please contact the undersigned. Only serious buyers will be responded to.

Mark Suckerberg is NOT even human! LOOK into IT’S EYES……it is an ANDROID!! And if you ‘believe’ (one who ‘believes’ does NOT THINK!), ‘we’ do not yet have that kind of technology?………you need to GROW UP!

OMG, I thought I was the only human who had looked into his eyes and thought “That man is not human he’s an android, a clone or an alien.” I’m not alone! YES.

I’m relieved someone else has seen that too. I kept looking and thinking, nah, not human.

He’s not an android, he’s a human being who’s simply evil. You see the same look in the eyes of every Communist Democrat, the woke, Leftists, progressives, and the globalists like Soros, Gates, Bezos, Dorsey, and all the rest.

He is a transhumanist. A self loathing human. This explains his lack of humanity.
If he could change himself into an android or hologram I’m sure Mark Z. would.

Whenever it’s predicted ahead of time that something will dominate, it never does.

This may be the most disturbing article I have ever read – ever.  Space is not the final frontier – reality is!  A smiling Zuckerberg is shown presenting artificial reality as a game. The problem, of course, is when humanitarian huckster Mark Zuckerberg puts on headgear he is selling the game – the feeling of being somewhere when you are not really there. The psychopaths who are socially and genetically re-engineering humanity are not interested in games – that is the con – the games are strictly for public consumption. The game is a marketing strategy rooted in feelings, designed to persuade you to buy into… Read more »

This “world” isn’t “reality either. They’re doing all this shit to keep us from accessing True Reality–“The Kingdom of Heaven”, and offering a substitute–counterfeit.
Read “Woes to the Scribes and Pharisees”. “They” are “them”.
EgoMatrix–World of Lies

We’re living in an upside down world. Can’t even see a face anymore it’s muzzled and suffocated by face diapers, and now these huge eyesets pumping blue light into your skull. You have no face left! More 5G towers built in last year than anything, now it’s 6G, 7G, etc. These frequencies are HARMFUL to biological organisms approaching microwave radiation. Of course when the solar storms start soon entire grid will go bye-bye and the metaverse will remain in your imagination. Approaching great solar minimum or ice age and it won’t be a “dimming” of the night light but a… Read more »

that sounds more appealing than the metaverse

Do you know what I call that? The Second Coming. This old world will indeed be destroyed, but ultimately the Earth will be ‘resurrected’ and alchemically transmuted to Gold — Spirit perfectly incarnated again — beyond that purification by Fire.

Can you recommend any good sources for researching the things you mention?

What the world is going through is not a reset but a hack. Only God can restore things to their original condition when He first created them.
The technocrats are malware in His system.

[…] prophet/profiteers like Mark Zuckerberg now calls the MetaVerse. Don’t know what that is? It’s alternate reality on a grand, global scale, and Mr. Zuckerberg and his fellow Master Plan…You can take his word for […]

[…] prophet/profiteers like Mark Zuckerberg now calls the MetaVerse. Don’t know what that is? It’s alternate reality on a grand, global scale, and Mr. Zuckerberg and his fellow Master Plan…You can take his word for […]

This is like the prequel to The Matrix right here

AWED Newsletter: We cover everything from COVID to Climate, as well as Energy to Elections. - Dr. Rich Swier

6G will not only ramp it up but will fry everything. Research Barrie Trower, British physicist, who is one of the world’s leading experts in microwave radiation. Cancer will skyrocket not to mention a host of other health problems and environmental. Even under 2G and higher, studies reveal that birds, ocean life and more will have trouble with migration. Mark Z has no goal except greed and control. With 6G and higher, society will become resigned to living with significantly elevated levels of illness and impairment. Medical professionals will become obsessed with triaging using oncology surgery, sleep, heart rate, blood… Read more »

“A world where we are represented the way we want to be.” Sounds like a narcissist who hates his real image because he wants to hold up a fake one.
Reality–spoken into existence by God–His truth and the only truth is hated by the Father of lies and all his children. To lie is to speak Satanese.

Facebook Goes Meta. Are You Prepared? – “New World Next Week” with James Corbett and James Evan Pilato - United Push Back

Nope Mark is just the skinny little Eastern European model wearing a ugly sweater for Gap. We all know it’s ugly, but then comes that day you’re out in town and everyone and their granny and dog is wearing that ugly sweater. Point of story…DARPA renamed its Life Log project and put a controlled mouthpiece as it spokesperson. And social media is that ugly sweater.

[…] Patrick is an author and journalist. He is also the founder of Citizens for Free Speech. Today we discuss the creation of a metaverse by Facebook founder Mark Zuckerberg that Patrick belives could be the final disconnect from reality. […]

Watch the movie “Implanted (2021)”. And the British scifi series “Utopia” from 2013. Satan and his globalists are mockers. They reveal their plans believing people will dismiss them as fiction or be unable to prevent their realization. And read the Bible. Get to know Jesus while there is still time. He is our only hope. And he forecast these times.