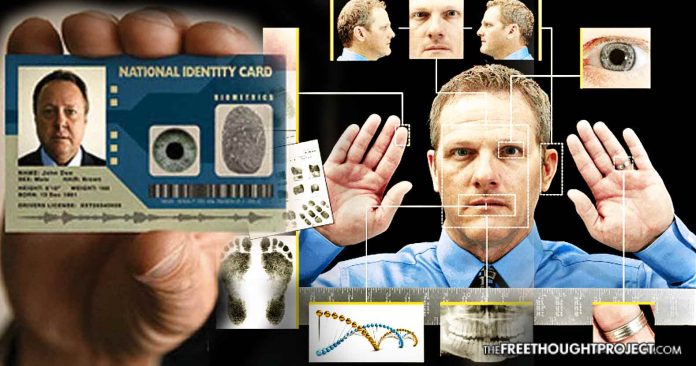 Technocracy demands universal identification in order to have universal tracking in order to achieve universal control. This is nothing less than a Scientific Dictatorship where individuality will become a distant memory.  Technocrat lobbyists who insert this kind of language into legislation mask their real purpose. ⁃ TN Editor

Earlier this month,  Rep. Bob Goodlatte [R-VA-6] introduced H.R.4760 – Securing America’s Future Act of 2018, a sweeping bill that entails everything from Education and the Workforce to Homeland Security to the military. Also, tucked away in this 400-page behemoth of a bill are the details of a new biometric National ID card that could soon be required for everyone.

Not surprisingly, there is almost no media coverage on this legislation.

H.R. 4760 establishes a mandatory National Identification system that requires all Americans to carry a government-approved ID containing “biometric features.” Without this card, according to the legislation, you will not be able to work in this country.

The legislation was drafted under the auspices of providing a legislative solution for the current beneficiaries of the Deferred Action for Childhood Arrivals (DACA) program.

However, as Ron Paul points out, “this bill would give DACA recipients a 3-year renewable legal status while forcing a biometric National ID card on virtually everyone else.”

“That’s right — the statists want to control you,” said Paul.

Naturally, this bill is wholeheartedly supported by the anti-immigration sect and has gained 70 co-sponsors already in only a few days. As with most police state-promoting legislation, fear of illegal immigration is being pushed to garner such support. However, as Ron Paul points out, the bill won’t just target illegals—it targets everyone—and it will use your most private information to track you.

“Under the statists’ National ID scheme, you’d be forced to carry around your National ID card, tied to this massive database, chockfull of biometric identifiers like fingerprints and retina scans,” Paul noted. “Without this ID, you won’t be able to legally hold a job — or likely even open a bank account or even board a plane!”

Paul said there is a very good chance this bill will become law as the support for it seems overwhelming. He laid out three key factors that are detrimental to the freedom of all Americans.

The control freaks in the US government have been trying for years to pass a National ID card law and it has been successfully resisted every time. This time, however, it appears that the Republicans—who used to be vocally opposed to such measures—are now fully onboard likely because of the bill’s anti-immigration language.

As Paul points out,

For years now, statists in BOTH parties have been fighting to RAM their radical National ID-database scheme into law.

In fact, this scheme was a key portion of the infamous failed “Comprehensive Immigration Reform” bills BOTH parties tried to ram through during the Obama administration.

Now, using the momentum behind Trump’s tough talk on immigration and border security, I’m afraid the statists believe the best way to finally enact their National ID scheme is by promoting their bill on Capitol Hill as a “DACA fix” while they sell it to the GOP base as a border “security” measure.

Of course, that’s nothing more than a buzzword meant to trick Americans from all over the country into thinking that Congress is going to seal our southern border.

But in reality, it means something far different.

The “security” members of BOTH parties in the U.S. House want doesn’t target any U.S. border. Instead, it’s meant to create an all-out police state within them.

The truth is, this is exactly the type of battle that often decides whether a country remains free or continues sliding toward tyranny.

Paul’s Campaign for Liberty is planning a massive crusade against this tyrannical legislation in the form of billboards, commercials, and other advertising. He’s even started a petition to let your representative know how you feel about them ushering in a new level of despotism and control. You can sign this petition here.

Absolutely same things now take place here in Russia as well – biometric identification and establishment of one unified database were being lobbied by certain people in the Govt, and then pushed to legislation without public discussion, then signed by president on the eve of 2018. The sane part of the society actively resist and protest against it, of course, but their protests are being blatantly ignored, getting no any reaction from the Govt. Undoubtedly, all these urgent and obviously forcible “reforms” are global and coming from one and the same supra-national center.

What about the clear statement on page 125 Section 1103 (d)(8)(A) that no National ID card is authorized by this legislation?