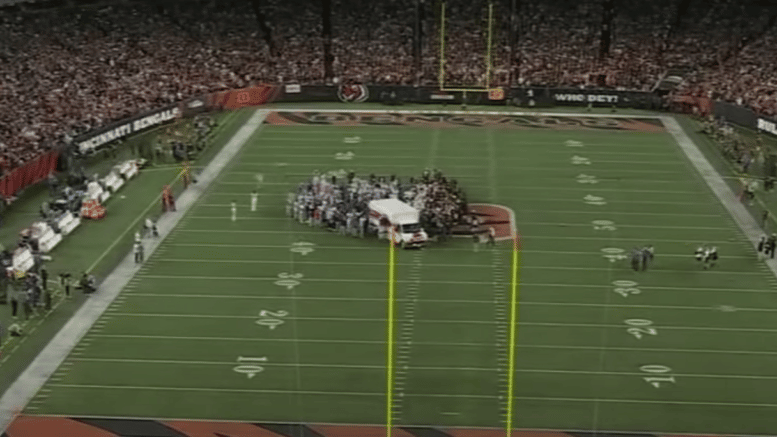 The wheels of the biomedical cartel’s bus are coming off. Shout it from the rooftops. Look around to see how many hands are being held up. The evidence of death is all around and people everywhere have figured it out, even if they are not openly talking about it. Perhaps now, they will talk. Accountability must follow. Pfizer knew. Moderna knew. J&J knew. Fauci knew. The WHO knew. In the meantime, the death shots must stop.

Yesterday, in front of the whole world and on national TV, 24 year old Damar Hamlin, playing for the Buffalo Bills, collapsed on the field and was taken off as CPR was being continuously administered. He remains in critical condition today, intubated and unable to breath on his own. This visual will never be forgotten, either by teammates in the NFL or those millions of fans who witnessed it.

In new polling, Rasmussen asked Americans about their perceptions of COVID-19 vaccine safety. Among respondents, 71% report receiving at least a portion of the vaccine series. It is easy to see how partisanship has impacted COVID shot uptake. While 85% of Democrats report receiving the shots, only 63% of Republicans and 64% of unaffiliated voters report the same.

Yet, despite a majority reporting that they have taken the shots, almost 50% believe it is at least somewhat likely that side effects of COVID-19 vaccines have caused a significant number of unexplained deaths. All men and people between 18 and 39 agree with the statement at the highest rates. This coincides with the cardiac side effect profile for men under 40 and the excess death rates reported by insurance actuaries in the working-age population.

And, despite the partisan differences in vaccine uptake, 51% of Democrats agree the shots could cause the recent uptick in unexplained deaths. Only 34% of unaffiliated Americans feel the same way, pulling down the overall result. Respondents with children at home believe vaccines may cause death at the highest rate of 58%. Among parents, 34% say it is very likely. This may explain poor uptake for the initial series in children five and under and low booster uptake in children under 18.

When the pollster asked if respondents thought they knew someone who died because of side effects from the COVID-19 vaccine, the results were astonishing. Nearly one-third of all adults said yes. Among those 18-39, 35% thought they might know someone who died because of the vaccine. Perhaps because of high vaccination rates, 33% of Democrats reported having this suspicion, while only 26% of Republicans and unaffiliated voters did.

Overall, 48% of those polled believe that there are legitimate reasons to be concerned about the safety of COVID-19 vaccines, while 15% are undecided. Those who think there are valid concerns include 83% of those who believe vaccine side effects may cause recent unexplained deaths and 76% of those who suspect they may know someone who died this way.

Among the vaccinated, 40% think concerns are valid, and 14% are unsure. Fifty percent of men, 52% of working-age Americans between the ages of 40 and 64, and 51% of respondents with children agree. In another show of partisanship, despite having the highest rate of suspicion that they know someone who died of vaccine side effects, 46% of Democrats say concerns about them are a conspiracy theory. Only 28% of Republicans share that view.

In a Rasmussen poll from mid-December, 68% of respondents reported receiving the COVID vaccination. Among respondents, 34% said they had minor side effects, and 7% reported major side effects from the vaccine. These findings mirror the data the CDC collected in the v-safe system. Among the 10 million participants in the app-based survey program, 33% reported being unable to perform normal activities after vaccination. Within that population, 13% reported missing work or school, and almost 8% reported requiring medical care.

Nearly half of Americans believe it is at least somewhat likely that coronavirus vaccines have caused a “significant number of unexplained deaths,” and over a quarter said they know someone whose death may have been caused by side effects of the vaccines, a Rasmussen Reports survey released Monday found.

The survey asked respondents, “How likely is it that side effects of COVID-19 vaccines have caused a significant number of unexplained deaths?”

The survey then asked respondents if they “personally know anyone whose death you think may have been caused by side effects of COVID-19 vaccines.”

Figures remain relatively consistent across the board, as 33 percent of Democrats, 26 percent of Republicans, and 26 percent of independents claim to know someone whose death, they believe, occurred as a result of the side effects from the vaccines.

Further, 48 percent said there are “legitimate reasons to be concerned” about the safety of the vaccines, compared to 37 percent who believe those expressing concerns are simply “spreading conspiracy theories.” Fifteen percent remain unsure.

Focusing on the Democrats in the Rasmussen Poll – Libs are poised to blame TRUMP for the vaccine slaughter because he continues to promote his WARP SPEED injections released so quickly, there was no time for meaningful clinical trials.

Great sarcasm, Harold. We need that kind of levity at this time. In the event that you were not being sarcastic, why not? No time for clinical trials for what? I mean, ‘no time’? huh? So, first of all; no time so you just give people what you’ve got? Especially when it corresponds to not one thing that has been used to combat a certain similar thing in the past. Second, a vaccine for a non-existent pandemic. I think you should look for the videos of Dr. Vernon Coleman. Then take the documentation that he cites and look through it… Read more »

Well, Trump is not in control now and has not been for the entirety of the covid kill-shot roll-out. Making a bad decision does not engender others, with brains, to make the same bad decision.

If 28% of Americans believe someone they know someone who died from vaxx side effects, then there should be a death toll of about 28% of the American population between 2020-2023. Is there? Where are the figures?

“Pfizer knew. Moderna knew. J&J knew. Fauci knew. The WHO knew.” And everyone knew they knew, so what’s new? The whole thing reminds me of a Solzhenitsyn quote; “they knew that we knew…” etc. But really, when are we going to focus on something that makes a difference? Looks like what’s going on the “internet” is that everyone wants to tout the strengths of the “current” system as a way to fight the coming system…that’s nothing but BS…NOTHING but. Positive thinking and visualization is NOT going to stave off destruction. We’re in the throes already and have been for decades,… Read more »

[…] News has also picked up the story: 28% Of All Americans Know Someone Who Died From mRNA Injections. TN’s […]

The 28% will continue to go higher. Much higher

Vaccines and dentistry do the exact same thing. Dentistry works slowly, vaccines work quickly, is all. Therefore, if you use dentistry, your reasons for refusing vaccines are invalid.

[…] News has also picked up the story: 28% Of All Americans Know Someone Who Died From mRNA Injections. TN’s […]

[…] 28% Of All Americans Know Someone Who Died From mRNA Injections […]