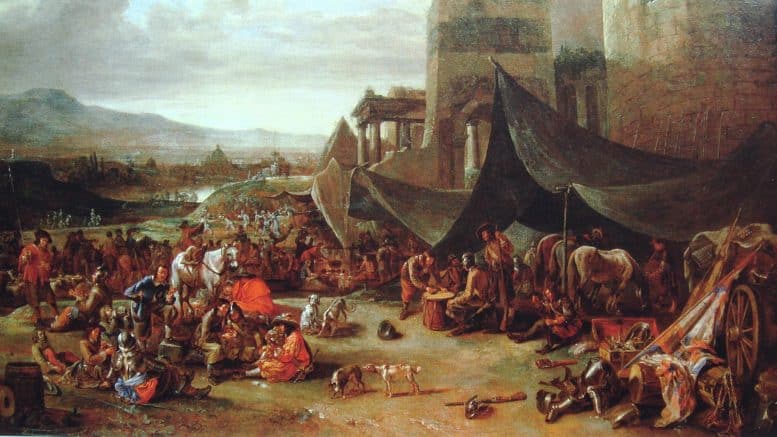 Please Share This Story!
PDF 📄
Technocrats are licking their chops as politicians drive society into failure and chaos because they will ultimately wind up controlling everything in the end, scientifically, of course. A great moral hazard exists in that the Humpty Dumpty of economy and politics is at risk to be given a little push off the wall. ⁃ TN Editor

Our institutional failure reminds me of the phantom legions of Rome’s final days.

The mainstream media and its well-paid army of “authorities” / pundits would have us believe the decline in our collective trust in our institutions is the result of fake news, i.e. false narratives and data presented as factual.

If only we could rid ourselves of fake news, all would be well, as our institutions are working just fine.
This mainstream narrative is itself false: our institutions are failing, and the cause isn’t fake news or Russian hacking–the cause is insider plundering and collusion, aided and abetted by a decline in transparency and accountability and the institutionalization of incompetence.

When was the last time you heard the top management of a university system take responsibility for the unprecedented rise in the cost of tuition and textbooks? The short answer is “never.” The insiders benefiting from the higher-education cartel’s relentless exploitation of students and their families act as if the soaring costs are akin to cosmic radiation, a force of nature that they are powerless to control.

The same can be said of every other cartel plundering the nation: healthcare (i.e. sickcare, because profits swell from managing chronic illness, not from advancing health); the Big Pharma cartel; the military-industrial complex; banking; student loans; the governance-lobbying cartels; the war-on-drugs gulag, the FBI and so on in an endless profusion of insiders whose self-serving plunder and gross incompetence rarely generates consequences (such as being fired or indicted) due to an absence of accountability and transparency.

Changing the elected officials who are the citizens’ representatives does nothing to rid the system of incompetence or enforce accountability and transparency; the insider elites have wired the system to avoid responsibility and maintain their institutionalized skims regardless of who is in elected office.
Budgets never decline, they only expand. The system is organized to punish frugality and reward incompetence, sweetheart contracts, overtime, and ever higher public spending.

Calls to trim waste are met by gestures of powerlessness: rising costs and institutional failure are presented as the equivalent of gravity: we can’t change the system, it’s unstoppable.

The general public has largely lost the experience of public-sector/institutional competence and accountability. As a result, resignation is now the response. So the public dutifully waits in line for hours to renew a drivers license, despite having made an appointment online, to take one common example in California, which likes to pat itself on the back as the tech / progressive capital of the galaxy, if not the universe.

How is it “progressive” to rob the working stiffs who pay all the taxes hours of their life for something that should be routine and quick? Where’s the Big Data and high tech when it actually counts? If citizens had a choice to renew their drivers license at (say) Amazon or the DMV, do you reckon Amazon might not make everyone cool their heels for hours?

The list of gross institutional incompetence is truly endless in America:Universities that can’t offer enough classes so students can graduate from college in four years (oops, you have to pay another rip-off tuition fee for another semester to get those last few classes you need for your worthless diploma); finance departments that can’t track payments (so here’s your bogus late fees that will take hours to challenge), and on and on.

As for sickcare–how about the evidence-free embrace of synthetic heroin as a “safe” and “non-addictive” pain treatment? Skeptics were bulldozed or marginalized, because there was simply too much money to be made by jumping on the Oxy et al. bandwagon.

As Scientific American reported in its June 2018 issue, “Powerful drug-marketing efforts had somehow swamped science.” When a large study was finally done comparing the effectiveness of opioid and non-opioid drugs, “The results, published in March, were eye-opening. Patients given alternative drugs did just as well as those taking opioids in terms of how much pain interfered with their everyday life. In fact they reported slightly less pain and had fewer side effects.”

Yes, many transactions are more complex now than they were 30 years ago.30 years ago it took less than a day to obtain a building permit for an entire house in the rural county I lived in. Now it takes 3 to 4 months in the same county to get a permit, which must now be stamped by a licensed architect or engineer (at great expense, of course).

I think we all know the answer is “no.” The vast majority of the wasted time, effort and cost is the result of unaccountable insider incompetence enabled by a complete lack of accountability and transparency.

Our institutional failure reminds me of the phantom legions of Rome’s final days. Legions existed in the bureaucracy, and payrolls were sent to the pay masters, but the Legions were mere fictions–there were no soldiers, and no fighting force; there were only a few insiders skimming their take, confident that accountability and transparency had been irrevocably lost.