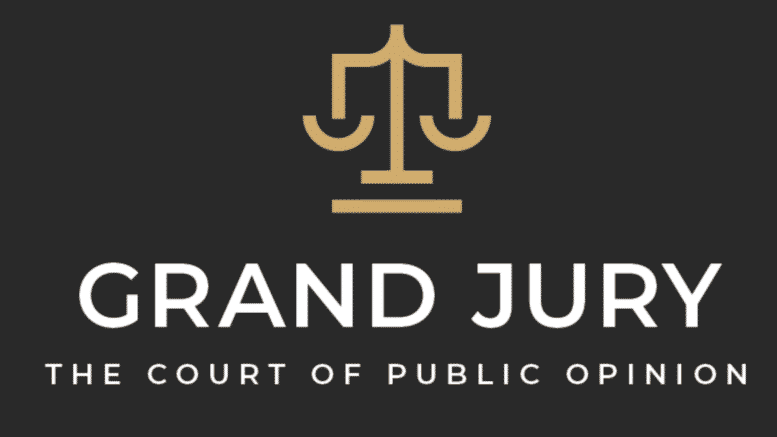 Patrick Wood will be addressing the international Grand Jury, Court of Public Opinion on two consecutive Sundays: first (Feb. 22) on the intentional economic destruction caused by the orchestrated pandemic and secondly (Feb. 26) on eugenics and transhumanism. The livestream events and schedule can be accessed here.

Spearheaded by international attorney, Dr. Reiner Fuellmich, and the Corona Investigative Committee, the Grand Jury intends to determine if Crimes Against Humanity have been committed during the 2020-2022 pandemic period and if so, by whom?

This investigation is of the people, by the people and for the people and will be referred to as the ‘Peoples’ Court of Public Opinion. Having been unable to find a court to hear the actual evidence in the current system’s courts of law, we are undertaking this proceeding outside of the current system and based on natural law. This, in turn is founded on the firm belief that every person can easily distinguish between good and evil, and between right and wrong.

The allegation is that the world’s governments have come under the controlling influence of corrupt and criminal power structures. They colluded to stage a pandemic that they had been planning for years. To this end they deliberately created mass panic through false statements of fact and a socially engineered psychological operation whose messages they conveyed through the corporate media.

The outcome of the Grand Jury will not be determined until all testimony is heard and considered, after which a statement of determination will be released.

The schedule for all proceedings is below and replays can be located here.

Day 1 – (Feb. 5) Opening Statements by the attorneys and Judge

Shame there are no GOOD and upstanding world leaders left, all corrupt, all morally bankrupt, all arrogant evil self-aggrandising tyrants. It’s good that Patrick a real expert will be testifying at the The Peoples’ Court of public opinion, hopefully some law enforcement authorities will have an attack of conscience and arrest and prosecute these Convid Globalist perpetrators of this heinous crime against humanity that must rank amongst the worst bio-war crimes ever perpetrated upon an unsuspecting and innocent world.

It is NOT actual legal proceedings or a real court. Fuellmich said on that it is only modelled on grand jury proceedings.

It is as legal as we the people are willing to enforce it. Suggesting this is not a country by the people and for the people, is only true if we allow the criminal activities to continue. Define what is legal? You are suggesting it is only those in government that can define it? That the citizens do not have rights to such questions?

The concept of a politically derived “good” leader is an oxy moron. No one knows what is in the best interest of the majority therefore they must lie to convince you they do. The few that do make it into such power are generally those like Ron Paul who sadly wasted much of his time trying to expose the lies and of course are minimalized by all those who are willing to lie. Just ask yourself one simply question to make my point. Can you scientifically prove public education has provided a “net” benefit to our society? You can of… Read more »

Patrick Wood To Testify Before The International Grand Jury, Court Of Public Opinion — Wirral In It Together – New Human New Earth Communities

[…] Patrick Wood To Testify Before The International Grand Jury, Court Of Public Opinion […]

[…] testimony begins before the International Grand Jury, Court of Public Opinion we see COVID19 lock-down restrictions fall worldwide and the ramp-up of HIV messaging from Harry […]

That the vaccines are not effective in giving immunity from contracting covid-19, nor stopping transmission of covid-19, if it was just or primarily about profit, the vaccine makers could have made vaccines that were both ineffective and truly safe with minimal side effects; especially death. It seems to be the primary goal is negative side effects to sell more drugs in attempt to remedy the negative side effects, for those that weren’t killed by the vaccines. Which seems, the primary goal is depopulation.

It’s not about any of that. The Covid is the Great Reset-the catalyst. It was the bogyman used to force compliance to the New World Order! It was a rich man’s trick! Forget about Covid and focus now on the New World Order and how they are shaping it. It is of Biblical proportions! The world has already been set up into 10 regions, and now who are the 10 kings of those regions, that is the question. The answer to this question may not be known until it is revealed after a global disaster of sorts. Only the wise… Read more »

I now believe it is about both depopulation and profits, a twofold win from them.

Andy, I am so sorry to say that you are so in the dark! These JABs were NEVER meant to CURE any disease. There was no disease that needed to be cured. If allowed, CCP could have ended with simple, old drugs already available. Available, that is until joeBAMA, and all, pulled them off the market! The CDC forced our personal doctors from prescribing these simple drugs to us, by making them unavailable. THE CDC has over 10,000 employees and NONE of them are medical doctors! So who is in charge? None other than bill gates and all his money.… Read more »

I appreciate Patrick Wood’s approach to the practical history of collusion amongst groups of powerful and private individuals, and the policies that they establish that ultimately shape our future. I believe it is extremely important to be very mindful of our use of language, so our presence in these discussions are reputable. We must maintain an outward appearance of fair minded balance. If we sound crazy, who will listen?

Thank you for your willingness to take the time and energy to add your obviously amazingly educated understanding and perspective regarding the evil behind these globalist technocrats and their plans to this international tribunal. God bless you!

Thanks for posting. I will surely spread the word.

[…] Patrick Wood To Testify Before The International Grand Jury, Court Of Public Opinion […]

Why?
to be censored?

[…] Patrick Wood of technocracy news explains in a simple way with a short presentation the reasons behind the covid coup or fake pandemic.  […]