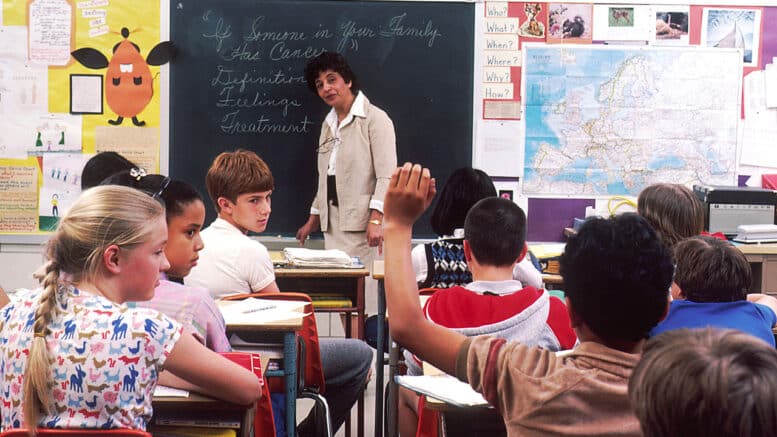 Please Share This Story!
PDF 📄
If you think racial profiling is problematic, just wait until you understand criminal profiling… of school children based on grades plus psychographic and demographic factors. Meddling with school records is apparently OK because it is done by Technocrats who, after all, think that all answers to society’s problems can be solved by them. ⁃ TN Editor

Imagine a world where police can foretell a child’s future simply by looking at their school grades. Welcome to the unbelievable world of predictive policing American style.

Apparently the Pasco Sheriff’s Office (PSO) considers a student with low grades and poor discipline records to be a future criminal.

According to a recent Tampa Bay Times article that is exactly what is happening in Florida.

“The Pasco Sheriff’s Office keeps a secret list of kids it thinks could fall into a life of crime based on factors like whether they’ve been abused or gotten a D or an F in school, according to the agency’s internal intelligence manual.”

The Sheriff’s office is secretly keeping records of 420 middle and high school students who they think could become future criminals based on predictive grading!

“School district data shows which children are struggling academically, miss too many classes or are sent to the office for discipline. Records from the state Department of Children and Families flag kids who have witnessed household violence or experienced it themselves.”

“According to the manual, any one of those factors makes a child more likely to become a criminal. Four hundred and twenty kids are on the list, the Sheriff’s Office said.”

As the article explained, the Sheriff’s Office does not tell the kids or their parents about their secret designation.

The PSO’s 50 page attempt at justifying why they are predicting which students will commit future crimes is worrisome.

Page 4 of the PSO’s response claims that “adjustments to the law over the years have leaned towards improving necessary information-sharing practices, due to a school shooting at Marjory Stoneham Douglas.” Which does not even come close to justifying how bogus their prediction program really is.

The PSO claims that a Memorandum of Understanding allows law enforcement to create ‘work ups’ or research on students but admits that they could also create separate ‘Intel reports’ on individual students.

The PSO’s outrageous justification for invading students privacy borders on the absurd.

“Having the ability to see grades, including grade drops, attendance, including several unexplained absences, and disciplinary records facilitates this mentorship.” (page 6)

An article in the Major County Sheriffs of America contradicts how the Pasco Sheriff’s Office uses their Mental Health and Threat Assessment Team to determine if a person [student] could become a future criminal.

“Understanding that everybody has a baseline, and when people dip below that baseline, we can provide some intervention strategies, connect them with a case manager, or other behavioral health resources within the community that can help them stabilize before they get to a crisis,” Pasco Sheriff Lt. Toni Roach said.

What the PSO is really saying is at least 420 students are in need of police intervention strategies.

The PSO has been secretly predicting how schoolkids could become criminals for at least twenty years.

“The Sheriff’s Office said its data sharing practices with the school district date back 20 years and are crucial to keeping campuses safe.”

An “Intelligence-Led Policing” document reveals how they use Compstat to help “identify at-risk-youth who are destined to a life of crime and prevent them from becoming prolific offenders.” (pages 6 & 13)

It also goes so far as to claim that kids as young as 10 years old can and will become life-long criminals, if they have bad school grades.

Page 14, reveals how the PSO has created a secret student “Early Warning System” which can allegedly identify which juveniles are at-risk of becoming prolific offenders.

Some of the things Florida law enforcement uses to determine whether or not a student will become a future criminal are mind-boggling. Things like, “adverse childhood experiences”, a student’s social network and whether of not a student has run away from home, are all factors.

As the above screenshot shows, most of the things that would put a student on the future criminal list are unbelievable:

“Elementary students make more threats compared to students in middle and high schools. Behavioral plans, supports, plans, and level of risk will continued to be monitored by the school-based threat assessment, as needed.”

Classifying elementary school kids as potential threats should tell you everything you need to know about predictive policing and threat assessments. I mean what’s next? Will they predict which toddlers might become future criminals?

Letting law enforcement decide who will or will not become a future criminal is about as absurd as it gets.

This is a perfect example of why we need to take police out of our schools.