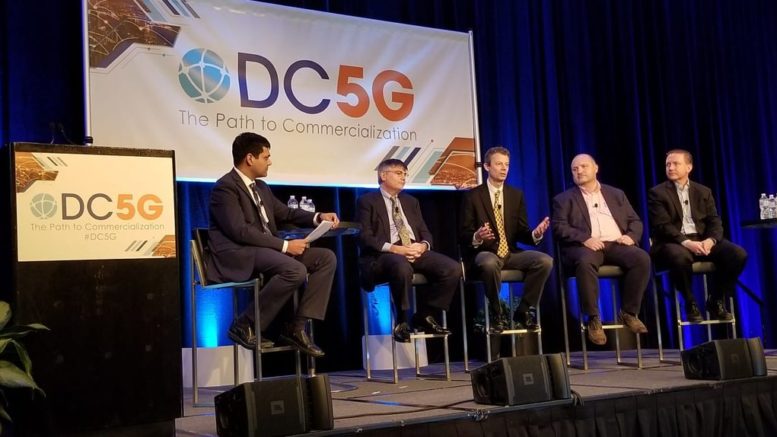 Please Share This Story!
PDF 📄
The concept of Public-Private Partnerships was originally invented by the United Nations to implement Sustainable Development, aka Technocracy. Since 5G is key to total surveillance, it is no surprise that P3s are playing a central role. ⁃ TN Editor

Cities should be deliberate about partnering with businesses and forming infrastructure strategies if they are to have success with 5G rollout, speakers from early 5G testbeds said Monday at the DC5G conference in Arlington, VA.

The Smart Docklands project from Dublin, Ireland, has brought 5G to a 1.5-square-mile area in the east of the city, and with it, officials have been rolling out small cell infrastructure to help close coverage gaps. Those small cells have been installed on all manner of city infrastructure, including lampposts, trash cans and stoplights. Edward Emmanuel, Smart Docklands’ project management and governance lead, said given the historic nature of the city, they have to be “really strategic” with the infrastructure they use. “We can’t just drill holes into them and stick things up,” he said.

Meanwhile, Salford in Greater Manchester, UK has looked to leverage its mixed-use MediaCityUK development at a 5G innovation hub, where businesses are shown how the technology can help make their operations more efficient through various accelerator programs. Jon Corner, chief digital officer at the City of Salford, said it has been effective as a “mechanism to bring companies in so they can start to discover that their innovations can be enhanced by 5G networks.”

In just a few years, both Dublin and Salford have become leading 5G testbeds, but they needed to show their desire to be innovative to find private partners. Emmanuel said Dublin has a reputation for not being an innovative city, perhaps due in part to its long history and aging infrastructure, but after reaching out to business partners and showing their plans, private sector companies were “surprised.”

It was a similar story in Salford, which undertook fast development of its Media City project while conversations were ongoing with UK telecoms about partnering on fiber rollout. Those conversations sparked more discussions about how to partner on 5G, Corner said, and private companies were immediately positive once they learned of potential use cases.

“I felt a really strong desire among those private companies to say, ‘We’re very interested,'” he said.

For U.S. cities, it shows the importance of a coherent strategy around the approval and siting of small cells, something the Federal Communications Commission (FCC) looked to streamline in a ruling last year, which is now the subject of court challenges.

Meanwhile, U.S.-based telecom companies have continued to make big promises about the rollout of mobile 5G and are beginning to bring the technology into several cities.

On a recent earnings call, Verizon chairman and CEO Hans Vestberg said the company is still committed to reaching 30 markets by year’s end, while T-Mobile CEO John Legere said on his company’s earnings call that with accelerated infrastructure build-out, there are plans to “launch our foundational layer of 5G nationwide this year.” AT&T CFO John Stephens also said on an earnings call the company is on track to launch its “nationwide 5G network” next year.

Since the Public-Private Partnerships (PPP) is a invention of the U.N. and an essential part of the Agenda 21 coup, does this mean we can never get rid of PPPs? Especially since the implementations of U.N. proclamations through the years. Proclamations are not U.S. law however have been enforced as such: ‘U.S. Senate Recognizes the United Nations as a Sovereign Nation: http://www.unwatch.com/un_sofa.htm