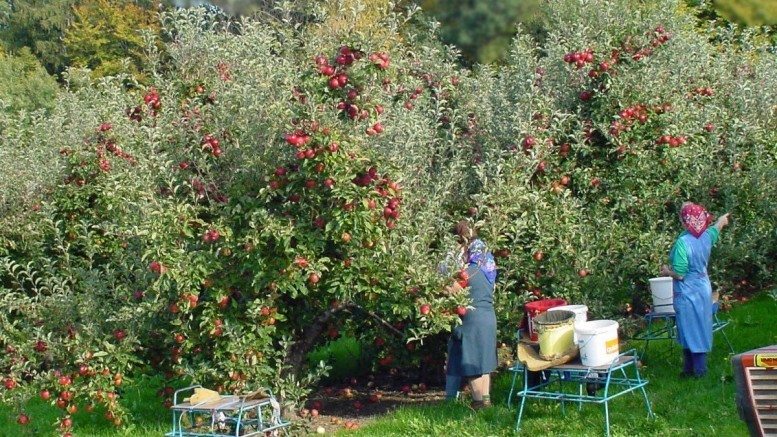 Please Share This Story!
PDF 📄
Abundant Robotics is a spinoff of the global elite SRI International (Stanford Research Institute) based in Palo Alto, California Apples have been picked the same way – by hand – throughout history, but not any more. In Washington state alone, over 125,000 seasonal workers from Mexico pick apples – it’s estimated that as many as 70 percent of them are illegals. Americans generally refuse to pick apples, unless it is a tree in their own back yard. ⁃ TN Editor

Apples are the second most commonly consumed fruit in the U.S., according to data from the U.S. Department of Agriculture, but the way apples are harvested in the orchard hasn’t changed much in the past two centuries. It’s still a manual process, by and large.

Now, SRI Ventures, a kind of startup incubator within the Menlo Park research and development firm SRI International, is investing in and spinning out a startup called Abundant Robotics Inc. to automate apple harvesting with agricultural robots currently in development.

The robots, as yet unnamed, were designed to be strong and fast enough to remove one fruit per second from a tree, but gentle enough not to damage trees or the fruit, according to Abundant Robotics’ CEO and co-founder Dan Steere.

They employ computer vision to recognize apples on the branch that are ready for harvesting, and a kind of vacuum to remove the apples, Steere said.

For power, the robots are plugged into the small tractors already used pervasively in fruit farming.

The team had previously worked on research funded by SRI and additional, non-dilutive grants from the Washington Tree Fruit commission to bring automation to the field.

Steere said, “Seeing fruit and picking it without damaging it is the big engineering challenge. If you bruise or cut the fruit it loses its value.”

According to SRI Ventures President, Manish Kothari, it had not been possible to automate the task of apple picking before recent breakthroughs in computer vision and image processing were made.

He said, “You direct this robot to go someplace, see and pick an apple, and go again. It’s a very non-trivial engineering challenge. To detect apples very precisely you have to see down at the millimeter level in real time. That requires software, and on the hardware side, chips that allow you to do real time image processing on the fly.”

SRI Ventures in 2016 has already spun out 7 companies this year so far, he noted, including Superflex and others all of which have attracted outside, venture investments.

The robot worker is looking more hideous by the second! Wow, a world with feelingless machines running around, doing everything people used to do. The elite enjoying the utopia they so yearned for.