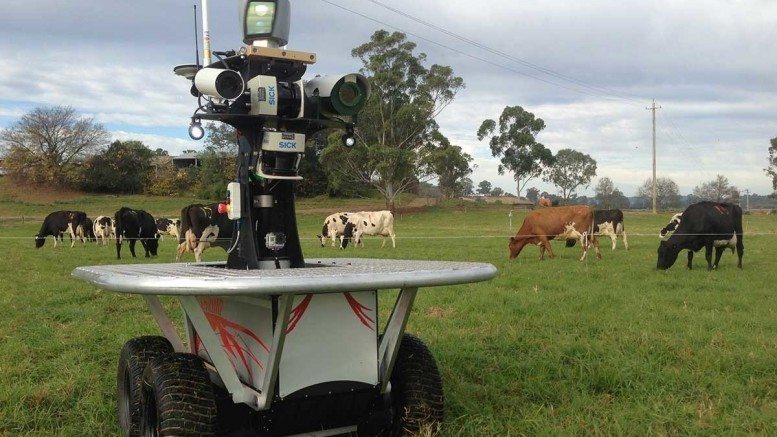 Please Share This Story!
PDF 📄
TN Note: The Fourth Industrial Revolution is rising. As robotic technology advances, virtually all of agriculture will be dominated by it, from livestock to row farming to prairie grains. Cowboys and farmers of yesteryear will be seen no more.

Farmers, put your feet up. Autonomous robots are already being used to inspect crops, count yields and dig up weeds– now they are shepherds too.

Sheep and cattle farms in the Australian outback are vast as well as remote. For example, the country’s most isolated cattle station, Suplejack Downs in the Northern Territory, extends across 4000 square kilometres and takes 13 hours to reach by car from the nearest major town, Alice Springs.

The livestock on these far-flung farms are monitored infrequently – sometimes only once or twice a year – meaning they often fall ill or get into trouble without anyone knowing.

But robots are coming to the rescue. A two-year trial, which starts next month, will train a “farmbot” to herd livestock, keep an eye on their health, and check they have enough pasture to graze on.

Sick and injured animals will be identified using thermal and vision sensors that detect changes in body temperature and walking gait, says Salah Sukkarieh of the University of Sydney, who will carry out the trial on several farms in central New South Wales.

“You’ve also got colour, texture and shape sensors looking down at the ground to check pasture quality,” he says.

The robot, which has not yet been named, is a more sophisticated version of an earlier model, Shrimp, which was designed to herd groups of 20 to 150 dairy cows.

During the trial, Sukkarieh and his colleagues will fine-tune the robot’s software to make it adept at spotting ailing livestock, and to ensure that it can safely navigate around trees and over mud, swamps and hills.

“We want to improve the quality of animal health and make it easier for farmers to maintain large landscapes where animals roam free,” says Sukkarieh. Another goal is to reduce the reliance on feedlots, which keep livestock in closely confined areas that are easy to oversee.

Every advance in robot technology stirs up fears about human redundancy, says Sukkarieh, but farm labouring vacancies are increasingly difficult to fill and can be replaced by jobs in robot maintenance. “It’s farmers who are driving this because labour is in short supply and they are looking for technological assistance,” he says.

How about a mini model that could tend say a half to one acre garden???Add moisture
sensors to control irrigation and we’re in business!

Ever think that all these robotic stuff that is being crated is to replace people? Instead of having people do those things for those who consider themselves elites, if they can replace all else with robots humans, except for the bare minimum, will not be needed.