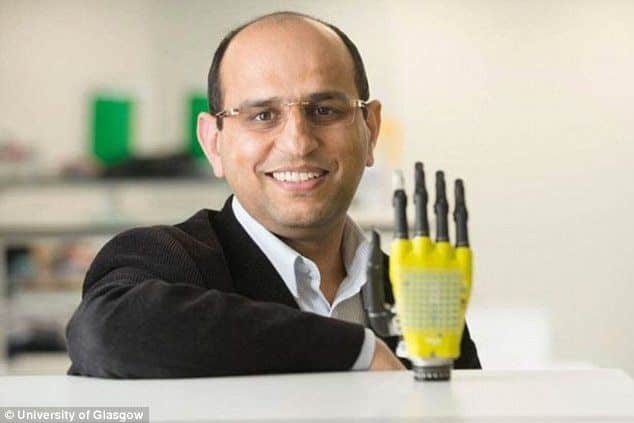 Graphene is one of three disruptive technologies that will usher in Technocracy within 10 years. Synthetic skin is only one application of many, but it will pave the way for human-like cyborgs that are more capable than humans. ⁃ TN Editor

A robotic hand covered in ‘electronic skin’ that can harvest the sun’s energy and feel touch better than a human has been developed by scientists.

The electric skin is made from graphene – an ultra-thin form of carbon that is only an atom thick, but stronger than steel.

The super flexible skin is hypersensitive to touch and may one day be used to make more responsive prosthetics for amputees, or to build robots with the sense of touch.

Teams around the world are working to develop flexible versions of synthetic skin that can feel by mimicking the different kinds of sensory receptors found in human skin.

Powering such systems is a challenge, but now researchers at the University of Glasgow’s School of Engineering have developed a way to use graphene, an ultra-thin form of carbon, to generate electricity via solar power.

Dr Ravinder Dahiya, from the University of Glasgow’s School of Engineering, said: ‘Human skin is an incredibly complex system capable of detecting pressure, temperature and texture through an array of neural sensors which carry signals from the skin to the brain.

‘My colleagues and I have already made significant steps in creating prosthetic prototypes which integrate synthetic skin and are capable of making very sensitive pressure measurements.

‘Those measurements mean the prosthetic hand is capable of performing challenging tasks like properly gripping soft materials, which other prosthetics can struggle with.

Graphene is just one atom thick, is strong, highly flexible, electrically conductive and transparent, making it ideal for gathering the sun’s energy to generate power.