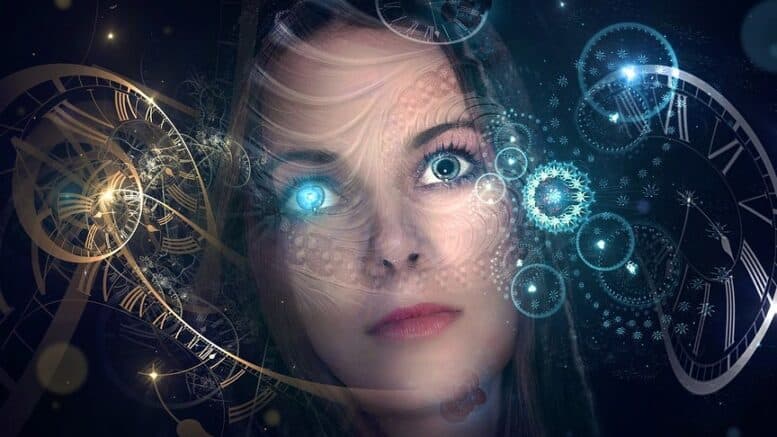 Please Share This Story!
PDF 📄
The following text and slides are taken directly from Canada’s Federal Government organization, Policy Horizons. It is pure Transhumanism and Technocracy that seeks “full physical integration of biological and digital entities” in order to “change human beings – our bodes, minds and behaviors”. ⁃ TN Editor 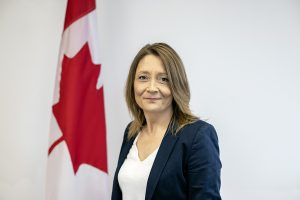 In the coming years, biodigital technologies could be woven into our lives in the way that digital technologies are now. Biological and digital systems are converging, and could change the way we work, live, and even evolve as a species. More than a technological change, this biodigital convergence may transform the way we understand ourselves and cause us to redefine what we consider human or natural.

Biodigital convergence may profoundly impact our economy, our ecosystems, and our society. Being prepared to support it, while managing its risks with care and sensitivity, will shape the way we navigate social and ethical considerations, as well as guide policy and governance conversations.

Guided by its mandate, Policy Horizons Canada (Policy Horizons) intends to start an informed and meaningful dialogue about plausible futures for biodigital convergence and the policy questions that may arise. In this initial paper, we define and explore biodigital convergence – why it is important to explore now, its characteristics, what new capabilities could arise from it, and some initial policy implications. We want to engage with a broad spectrum of partners and stakeholders on what our biodigital future might look like, how this convergence might affect sectors and industries, and how our relationships with technology, nature, and even life itself could evolve.

We welcome your comments and participation, and look forward to diving more deeply into the questions raised in this paper.

In the late 1970s and early 1980s, Canadians and policy makers began to understand that the digital age was upon us. Early movers seized opportunities, grappled with challenges, and initiated deft policies that have provided benefits for decades. We continue to see the powerful effects of digitization, and more are surely to come. But we may be on the cusp of another disruption of similar magnitude. Digital technologies and biological systems are beginning to combine and merge in ways that could be profoundly disruptive to our assumptions about society, the economy, and our bodies. We call this the biodigital convergence. 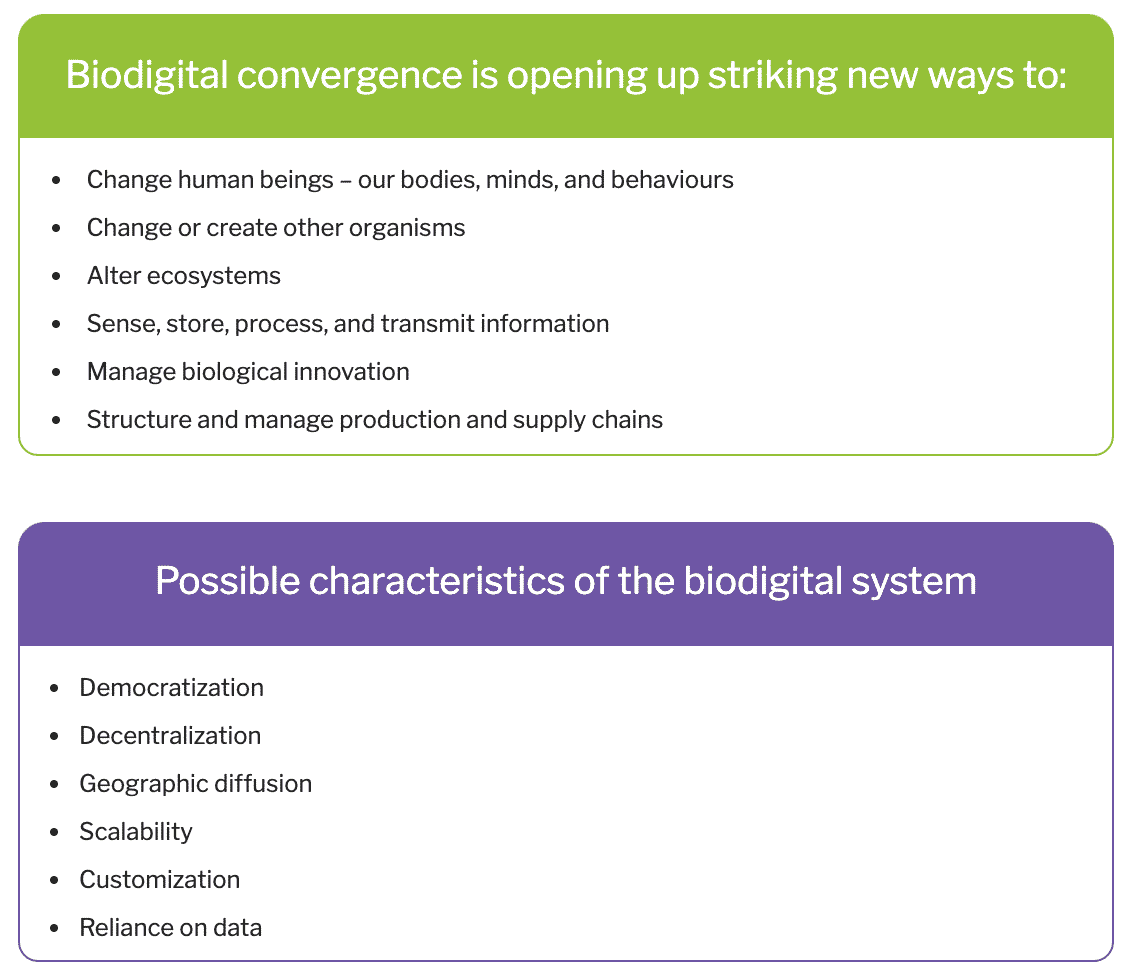 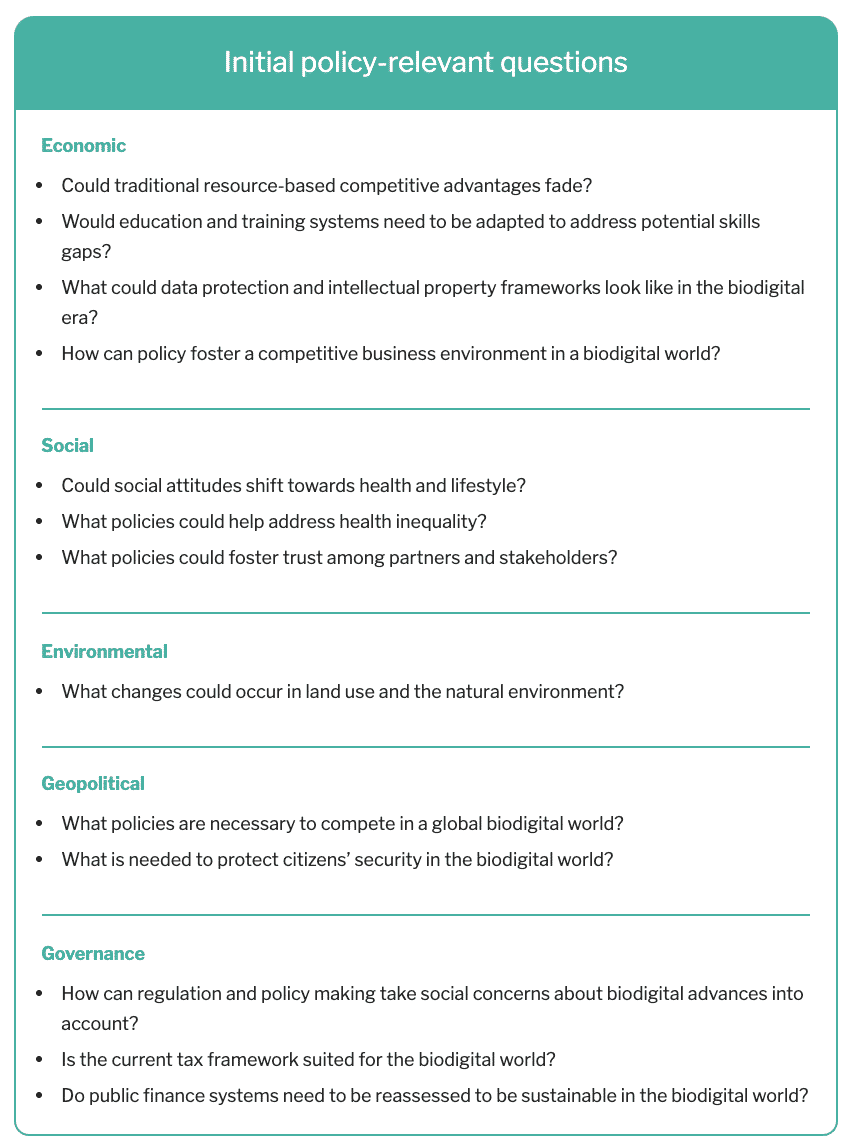 What is biodigital convergence?

Digital technology can be embedded in organisms, and biological components can exist as parts of digital technologies. The physical meshing, manipulating, and merging of the biological and digital are creating new hybrid forms of life and technology, each functioning in the tangible world, often with heightened capabilities.

Robots with biological brains01 and biological bodies with digital brains02 already exist, as do human-computer and brain-machine interfaces.03 The medical use of digital devices in humans04, as well as digitally manipulated insects such as drone dragonflies05 and surveillance locusts06, are examples of digital technology being combined with biological entities. By tapping into the nervous system and manipulating neurons, tech can be added to an organism to alter its function and purpose. New human bodies and new senses of identity07 could arise as the convergence continues.

2 Coevolution of biological and digital technologies

Complex living systems – bacteria, fungi, plants, and animal life including humans – are increasingly subject to examination and understanding by digital tools and applications such as machine learning. This deeper understanding, enabled by digital technologies, means that biology is subject to influence and manipulation that was not possible a few years ago.

For example, gene sequencing combined with artificial intelligence (AI) leads to understanding genetic expression, which is then used to alter existing organisms to create organic compounds in new ways08 or even entirely synthetic organisms.09 The CRISPR/Cas9 approach and other new gene editing techniques would have been impossible without the evolution of digital technology and bioinformatics. Advances in digital technologies have helped the advancement of the biodigital.10

We also see a greater understanding of biology, which is fueling progress in the field of biological computing. Neural nets – computer systems that are designed based on biological brains – are an example of how biological understanding is shaping digital technology.

There is also a blurring between what is considered natural or organic and what is digital, engineered, or synthetic. For example, biosynthetic vanilla is created using ferulic acid, eugenol, and glucose as substrates, and bacteria, fungi, and yeasts as microbial production hosts. Although it does not come from a vanilla plant, under both U.S. and EU food legislation, its production from “microbial transformations of natural precursors” allows it to be labelled as a “natural flavoring”.11

A third form of biodigital convergence involves a shift in perspective that could reshape our framing and approach to biological and digital realms, facilitating the blending of the two.

As we continue to better understand and control the mechanisms that underlie biology, we could see a shift away from vitalism – the idea that living and nonliving organisms are fundamentally different because they are thought to be governed by different principles.12 Instead, the idea of biology as having predictable and digitally manageable characteristics may become increasingly common as a result of living in a biodigital age. Any student of biology today will have grown up in a digital world and may consciously or subconsciously apply that frame of reference to bioinformatics and biology generally.

From a digital perspective, we see a potential shift in the opposite direction. Computing began as a means of producing predictable, replicable, and relatively simple outcomes. As digital technology became more complex and connected, the system began to mimic the characteristics of the biological world, leading to the notion of technological ecosystems. Biological models are also being used to develop digital tools, such as AI based on neural nets.

This one minute clip describes ultimately what is taking place: https://www.youtube.com/watch?v=xwR-WulXGm8

this one minute video clip tries to explain where ‘they’ would like to take the human species : https://www.youtube.com/watch?v=xwR-WulXGm8

“Join the discussion”— but there understandably is none.

Yes I noticed that, as I would LOVE to tell these creatures I am for one NOT INTERESTED in an ABOMINATION against Nature, we are HUMAN not machines like the minds of these idiots pushing this CRISPR dystopian idea of what the Elite Satanic set want for their future slaves (us), AI is ARTIFICIAL, not real Intelligence as IS the Consciousness of the human mind, so much more than they are able to even understand, because they have lied stolen and cheated their way to get to the top of the Greed Pile and buy anything they wish, these arrogant… Read more »

Brave New World.
I’d rather be in old fashioned restraints than the new ones these monsters have planned for us.

You often wonder how people like Henry Kissinger live so long. Obese, lack of exercise, yet still going at 98. Must be the young blood. The Rockefeller’s and royal families almost all pass 100 years old. Transhumanism gives people like these the dream of becoming a God, and never dying. Experiments are streaming ahead with taking from the brain the memory and emotions of people and transplanting them into a different body. Let us make man! One can imagine their dream for immortality is to have their memories and emotions transplanted into a young healthy body, which must be one… Read more »

This does not surprise me in the Cultural-Marxist soft tyranny of Canada. Trudeau’s father was a Marxist and the Acorn does not fall far from the tree.

Does anyone believe the Elite are willing to decrease their power for any reason? The only way such things can be viewed is in what way will these new systems enhance the power and profit of the politicians and their donors. It looks like the Elite want to have ever more power and control over their serfs, us.

The only way they can make these dead matter live is to force feed souls (consciousness) into it, which is a diabolical act. Those who have been plaguing earth for eons have been doing this, force-feed living souls into their SOLAR SUN which keep them here in existence on earth ruling over it. They kill the body(human beings) in the millions and millions and capture souls. They feed on the PureEnergy of these souls that is beaten down to a lower frequency eg. WARS, FEAR, satanic rituals etc. to keep themselves in existence.

Know how irritating that “App has stopped working.” notification is on your phone? Imagine that when your neural net won’t boot up and you can’t walk.