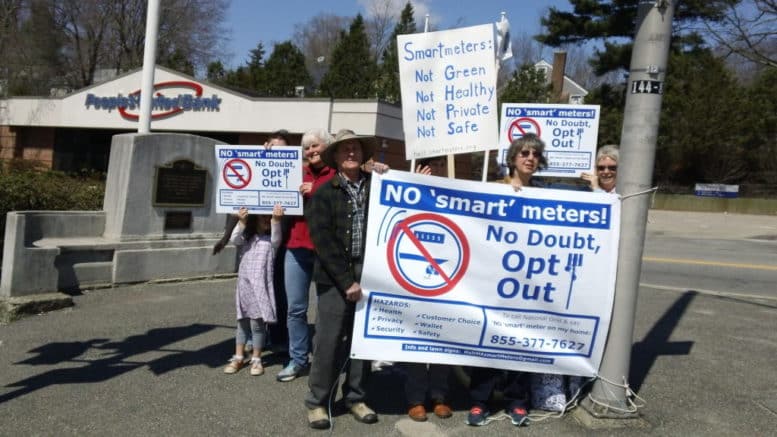 Please Share This Story!
PDF 📄
The Technocrat promise of Utopia is unproven, unwanted and dangerous to society, but Big Tech companies are frenzied to implement it. Their worst nightmare is citizens to are not asleep and who naturally block their plans. ⁃ TN Editor

Many pro-industry groups have compiled lists of the benefits of smart cities, the promise of data-driven decision-making, and the purported benefits of 5G and the Internet of Things.

So, what happens when the promise of smart cites and big data goes off the rails?

What recourse does a citizen or a community or a nation have when the anticipated promised land does not match reality?  What agency or authority is responsible for addressing emerging integrity issues in the data-driven industry?

Apparently, at least thus far, none. [3]

In the number one clean energy efficiency state [4] an example of unchecked inaccuracy has thus far prevailed.  But informed and ethical citizens and decision makers will hopefully soon recognize that every human foible that may corrupt policy without the benefit of big data is also possible in the age of big data.

A glaring example of the danger of supposed data-driven decision-making is playing itself out in a small state in the Northeast.  The issue is ‘smart’ wireless utility meters, the utility is National Grid, the meter vendor is Itron, the consulting company is Navigant, the agency is the Department of Public Utilities, the tobacco scientist is Peter Valberg, the product defense firm s Gradient, the Governor is Republican, the Attorney General is a Democrat, and the Legislature leans left.

A crime wasn’t committed by the butler in the pantry with a candlestick.

But something has gone terribly wrong, and, it highlights the need for an urgent course correction and functional system of checks and balances for data-driven decision-making that has thus far appears to be lacking.

What Went Wrong in Worcester?

Let’s say that you run a school, and you start with 15,000 students. But some students drop out. You keep replacing them, but they still keep dropping out.

Then, let’s say that the definition of an “active student” is defined as someone who visits your website at least once, so you begin to send bait-click emails with promises of free donuts and iPads.  With this definition, you now have exactly 2,504 active students, [5] some of whom are actually your paid employees,[6] and some of whom supported your agenda from the start. [7]

And you either spin the data yourself or you hire a company to spin the data so that you can attempt to say with a straight face that you have a 98% retention rate in your school.  To hide attrition, you don’t start counting retention until half way through the year.

Not only that, but your regulators give you a two-year extension for your “school” and they agree to keep surcharging the citizens to pay for it.

In August of 2017, when President Marcy Reed spoke at a meeting of policy makers from across the country, she drastically misrepresented the Worcester smart meter pilot program. Reports of her presentation imply that the pilot was comprised of 11,000 participants, with a 98% retention rate. [8]

No school system could sustain such inaccurate reporting, nor should any investor-owned utility and/or regulator. Houston, we have a problem.

One problem is that due to auto-enrollment, many residents did not even know that they were in the pilot or that they had received smart meters.

For example, one article reports:

National Grid, a utility operating mainly in the North Eastern US, implemented its two-year Smart Energy Solutions program a little over a year ago, and has announced that in the first year it achieved a 98% customer retention rate, a 72% customer satisfaction rating, and total customer bill savings of around $1.25m – equating to around $113 per customer in a year.

So the 4% reduction in peak usage means that National Grid could save 4% on its peak generation acquisition costs, which could be the difference nationally between building a new coal plant or being able to rely on the more environmentally friendly (and increasingly cheaper) renewable sources of energy like solar and wind that are captured in battery storage – either inside the home or at grid-scale. [11]

If the Worcester pilot in no way demonstrated the potential for a 4% reduction in peak generation acquisitions, investment in infrastructure is being misdirected. Ratepayers have been subjected to fraudulent reporting.  Yet the results of the pilot are being used to influence decision-making in New York and in Rhode Island, and to justify grid modernization policy for the other investor-owned utilities in Massachusetts.

The question of whether National Grid spun the results to Navigant, or whether Navigant spun the results for National Grid has to be raised against the backdrop of possible collusion by regulators and legislators, especially because Massachusetts regulators also relied on the testimony of a mercenary tobacco scientist to advance the smart meter agenda. [12] Industry leaders across the country relied on the opinion of tobacco scientists to tell the National Conference of State Legislators that smart meters are safe. [13]  When informed by citizens that science supporting safety claims is lacking, regulators in most U.S. states remained undeterred.

The National Grid Worcester smart meter pilot program fires a warning shot across the bow of the future of smart cities, big data, 5G, and the Internet of Things because the pilot success appears to have been a foregone conclusion, designed, implemented, and delivered by those who had the data, and financed by unsuspecting ratepayers. [14]

The pilot was designed to entice, bribe, and reward customers, implying that they would not otherwise become engaged around energy savings, and assuming that the pricing and the rewards were responsible for any reported desirable outcomes. This may be an outdated and ill-informed assumption, but it is clearly designed to validate investment in billions of dollars of infrastructure investment for the investor-owned utility.

The goal of the pilot was not to simply study customer behavior or to “listen, test, and learn.” The goal was to drive the community through a series of boundary violations to paint a picture of a specific outcome.

Massachusetts activists have filed numerous complaints with the MA Department of Public Utilities, and have asked the Securities Exchange Commission and the FBI to investigate the pilot reporting. Complaints were made to the City of Worcester and to many members of the Massachusetts legislature, the Governor, and the Attorney General regarding the pilot program’s implementation, and reliance on a tobacco scientist for health expertise.

The claim that “Smart technology can provide cities with predictive analytics to identify areas that need to be fixed before there is an infrastructure failure” needs to be weighed against the emerging reality that environmentalists have been duped into supporting surveillance infrastructure that carries massive health and environmental risks.  What needs to be fixed, now, is the burgeoning technological system that allows data to be used as a weapon. Modernizing the grid without investing in necessary maintenance and repair and without monitoring of adverse impacts of new wireless infrastructure is not progress.

We don’t need driverless cars supported by millions of antennas that allow us to be asleep at the wheel.  We need the emergence of a thoughtful, intelligent, informed response to the very real danger of corrupted power, now driven wirelessly, invisibly, by data. [15]

[1] https://www.plantemoran.com/explore-our-thinking/insight/2018/04/thinking-about-becoming-a-smart-city-10-benefits-of-smart-cities [2] https://hub.beesmart.city/strategy/6-key-benefits-of-becoming-a-smart-city [3] https://ethics.harvard.edu/files/center-for-ethics/files/capturedagency_alster.pdf [4] https://www.mass.gov/service-details/clean-energy-rankingsprogress [5] SES_Final_Evaluatio_Report_Customer_5-5-17.pdf [6] http://www.telegram.com/article/20141128/NEWS/311289970/0/SEARCH   National Grid employee and pilot participant Lynn Westerlind wrote an editorial about how she can find out if she left her coffee pot on through her smart phone. [7] https://www.energy.gov/sites/prod/files/2013/07/f2/VoicesofExperience.pdf [8] Reed said that in Worcester, National Grid offered customers the ability to opt out of the pilot and only about 2 percent opted out.”http://www.telegram.com/news/20170809/worcester-cited-as-example-of-power-grid-that-isnt-stupid [9] National Grid’s US$44 million SES programme, which was approved by the Massachusetts Department of Public Utilities in August 2012, aims to give 15,000 Worcester customers greater control and convenience in managing their energy usage.
https://www.engerati.com/article/national-grid-customers-save-smart-grid-pilot [10] Encouraged by customer satisfaction, positive results, and the opportunity to learn more about how smart grid investments may improve electric service and reliability across the Commonwealth, National Grid is seeking to extend the Smart Energy Solutions (SES) pilot program in Worcester for an additional two years.

Eager to build upon the program’s successes and help the state evaluate the benefits of grid modernization, the company filed a request yesterday with the Department of Public Utilities to continue the most comprehensive smart grid pilot in the Northeast. The program’s 15,000 customers have access to pricing plans designed to help them save on their monthly electric bills and prepare for days when energy usage is highest. Findings from a mid-program evaluation revealed that in 2015 the SES program achieved a 98 percent retention rate, a 72 percent customer satisfaction rate and total customer savings of $1.25 million on their electric bills. Additionally, the average customer reduced their usage by nearly 4 percent during peak periods of electricity demand.

[11] http://www.csrwire.com/press_releases/39252-National-Grid-Pursues-Smart-Energy-Solutions-Extension [12] http://www.raabassociates.org/Articles/MA%20DPU%2012-76-B.pdf [13] http://www.ncsl.org/documents/energy/oldak_ppt.
[14] https://eeaonline.eea.state.ma.us/EEA/FileService/FileService.Api/file/FileRoom/9790073  Burke_comments_9-6-18.pdf [15] https://www.senatorpatrickcolbeck.com/wp-content/uploads/2018/09/Wireless-Radiation-Brief.pdf
Patricia Burke works with activists across the country and internationally calling for new biologically-based microwave radio frequency exposure limits. She is based in Massachusetts and can be reached at stopsmartmetersMASS@gmail.com.