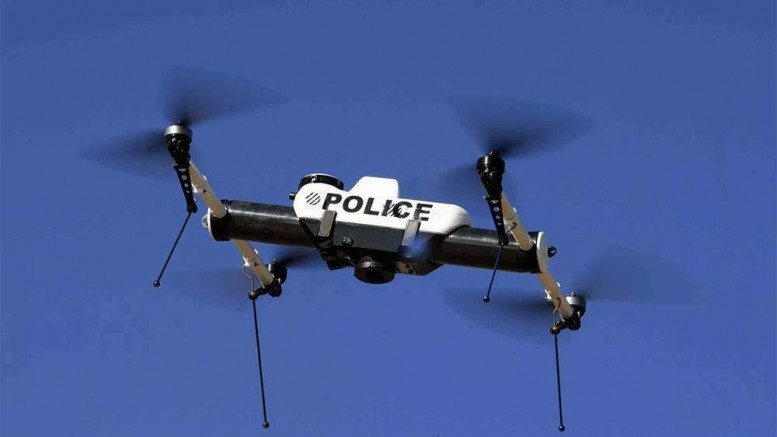 TN Note: It’s just a matter of time that law enforcement will break down public sentiment against arming police drones with various weapons, including tear gas, tazers and firearms. The military is already aggressively pursuing this technology.

The drone discussion has been buzzing around the state Capitol for hearings this week.

Monday, a bill to ban the weaponization of drones was discussed, and on Tuesday, a bill to control the use of drones in many ways, including by law enforcement agencies, was debated.

Lawmakers listened to testimony concerning restrictions on drones with cameras versus expectations of privacy. The bill would also require police to get a warrant to use drones in many cases.

Police made the argument that armed drones in law enforcement could be an effective weapon for public safety.

“We’ve had a report that somebody’s going to fly a drone into an airplane, into an engine, or it’s a weaponized drone,” Farmington Police Chief Paul Melanson said.  “We’re concerned and we don’t have those answers yet.”

The ACLU of Connecticut testified against allowing police to arm drones, saying it could open the door even more to excessive use of force.

“We are concerned that there could be misuse, particularly on vulnerable communities,” David McGuire of the ACLU said at the hearing.

It’s important, I think, to note that “firearm” is a term that has specific meanings defined in the U.S. code and federal regulations. It does not mean all guns.

State Police TRUE RESPONSIBILITIES include protecting the Governor and all State property. Yes, Yes, I know you see State Police patrolling urban areas initially just Interstate highways transiting cities as “backup” for the Sheriff’s Department. But increasingly State Police presume “local jurisdiction” as first responders and continue to lack it. The LEO’s of City and County are “controlled” by locally elected city and county review boards, but the STATE POLICE are not subject to any restriction except the Governor. Imagine having a problem with “local STATE Trooper”: How much of a hearing are you going to get for redress from… Read more »

When will we disarm the police?

Why not recruit people with empathy? People with actual courage when unarmed?