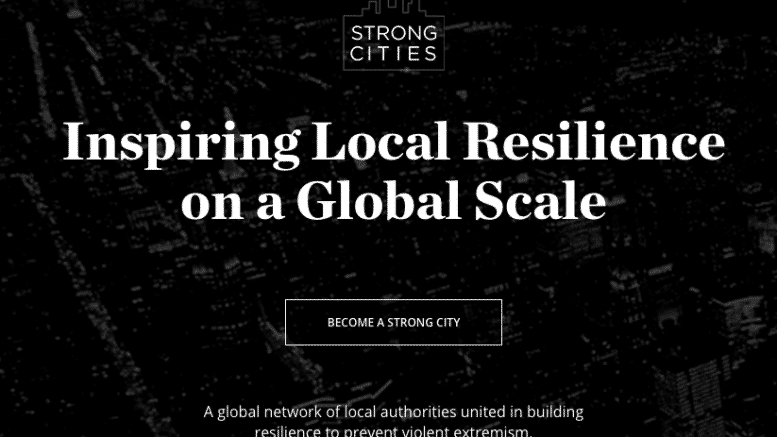 Attorney General Loretta Lynch’s speech to the United Nations on September 29, 2015, will go down in history as the tipping point of total globalist control over the streets and cities of the United States, and the end to a Republic form of government.

This stands in stark contrast to the oath of office that was administered to Lynch prior to being installed as America’s “top cop.”

‘I, Loretta Elizabeth Lynch, do solemnly swear that I will support and defend the Constitution of the United States against all enemies, foreign and domestic; that I will bear true faith and allegiance to the same; that I take this obligation freely without any mental reservation or purpose of evasion; and that I will well and faithfully discharge the duties of the office on which I am about to enter. So help me God.’ [Emphasis added]

Yet, in Lynch’s speech she states, “… connecting those localities to one another – as the Strong Cities Network is doing – is not only a powerful way to lift up our communities worldwide.  It also sends a message about who we are and what we aspire to be – as an alliance of nations and as a global community.”

This begs the question, who is the Strong Cities Network? A quick look at their website reveals,

“The Strong Cities Network is the first global network of cities and other sub-national entities working together to build social cohesion and resilience to prevent violent extremism in all its forms.

“The Strong Cities Network provides a global platform to support local authorities to systematically share lessons learned, pool resources and build a community that can mobilize local action on a global scale.”

First, it should be noted that Strong Cities Network is NOT a government body at all, but rather a Non-Governmental Organization (NGO) with no connection to any government, or even the United Nations! They simply state that an International Steering Committee of officials from 25 cities around the world will “determine the strategic direction and thematic priorities of the Strong Cities Network.”

Who is the Institute for Strategic Dialogue? It is yet another NGO think-tank run by a fourteen-member Board of Trustees all of whom are directly connected to the global oligarchy. One member, Field Marshal The Lord Guthrie, is a member of the Trilateral Commission and a former Director of the global financial empire, N M Rothschild & Sons Limited. No less than ten other board members also have direct ties to the global financial world. The Board also contains two Baronesses and three Lords of the British monarchy.

One of ISD’s ideological positions should be of great concern to all Americans. A section of their web site details an initiative to fight against “Far-Right Extremism and Intolerance”, which states,

“The blurred relationship between violence from the extreme right and broader trends of Islamophobia and anti-immigration sentiment poses several challenges for policy makers seeking to address the increasing risk of violent right-wing extremism…In 2012, ISD launched a new programme of work to enhance understanding of the threat from the far right, and help policy makers to develop effective responses to these violent and non-violent movements.“ [Emphasis added]

In America, such “far-right” groups are already defined by the FBI and Department of Homeland Security as Tea Party groups, Oath Keepers, Constitutionalists, defenders of the 2nd Amendment and all who oppose Islam, the United Nations, Sustainable development, Agenda 21, Common Core Education Standards, etc.

What has Attorney General Loretta Lynch just done to America?

She has sold us out to a high-level and self-interested group of global oligarchs, none of whom have any experience in fighting “violent extremism” in a general sense. In fact, the only “violent extremism” they fear is that which is directed at themselves or their protected interests.

This makes total mockery of Lynch’s oath of office. Instead of supporting and defending the Constitution, she is stripping the American Republic of its Constitutional protections.

Indeed, her co-opting of American cities into the hands of unelected and unaccountable global elitists is grounds for nothing less than immediate impeachment.

In the meantime, watch your own city like a hawk and deny the Strong Cities Network from gaining a foothold.

Resilient Cities is sponsored by the Rockefeller Foundation and is definitely a key player in unifying cities around the world in order to fit the global Sustainable Development agenda. This article focuses only on Attorney General Lynch’s speech and the organizations directly related to it.

Why not call it what it is?

TREASON against the American people and the US Constitution and all that is in Pursuance thereof it by Loretta and the complete Obama Administration and every single person involved in any part of it, even if they are just housekeeping for them.

“She has sold us out to a high-level and self-interested group of global oligarchs, none of whom have any experience in fighting “violent extremism” in a general sense. In fact, the only “violent extremism” they fear is that which is directed at themselves or their protected interests.”

True. Most their experience is in funding, creating and exploiting violent extremism.

Please provide a complete individual list of the “Strong Cities Network” Thank you !

This whole administration & their puppeteers need to be put on trial then put in front of a firing squad.The public that just believes what they hear from the mainstream media are just as guilty! So I guess we just grab some popcorn and watch it happen,God help us….

All USG officials, whether elected or appointed, take an Oath to uphold and defend the US Constitution against all enemies .. both foreign and domestic .. and are bound by that Oath to do so. Those who violate that Oath commit High Treason and must be prosecuted .. and, if found guilty, must face the ultimate penalty – death by hanging.
Every official in Obama’s Administration .. including AG Loretta Lynch and all Cabinet members .. have seriously violated their Oath of Office, and thus, must be prosecuted accordingly and hanged for their treason.

Australian Minister for Foreign Affairs Julie Bishop, Australian Minister for Defence Marise Payne, Secretary of State John Kerry, and Secretary of Defense Ashton Carter met on October 13 in Boston for the Australia-United States Ministerial (AUSMIN) consultations. [They] Australia-United States Ministerial (AUSMIN) decided to continue collaboration on best practices for addressing the threat at the international level, including through the United Nations and the Global Counter-Terrorism Forum and its inspired institutions such as Hedayah and the Global Community Engagement and Resilience Fund (GCERF), at the national level, including through legislation, immigration and consular policies, and at the local level, including… Read more »

When a public elected government official takes an oath of office and acts or goes against the oath, the individual is then guilty of committing perjury which is punishable by up to but not more than 10 years of prison incarceration. There is a 1940 Smith Act that lead to one of the longest trials in America that occurred in the 50’s known as the Smith Act Trials which had to do with government takeover by individuals loyal to another foreign government other than that of the US. This law is currently on the books as law today. It’s time… Read more »

Does anyone actually read the oath of office? Do you really think the work “discharge” means anything other than the legal definition of the word, in the legal dictionaries?

Bloomberg and the Council of Mayors Is what we need to watch for the next year. We need to begin to organize small groups nationwide to create a defensive line. They are putting all their chips on the table of America within our cities. They said that in one of the reports. They are going to be throwing money at the mayors and councils and school boards like it’s manna raining from heaven. I too believe we should be able to charge these conspirators with treacon sedition and espionage, That IS what is occurring.I think most people see that now.