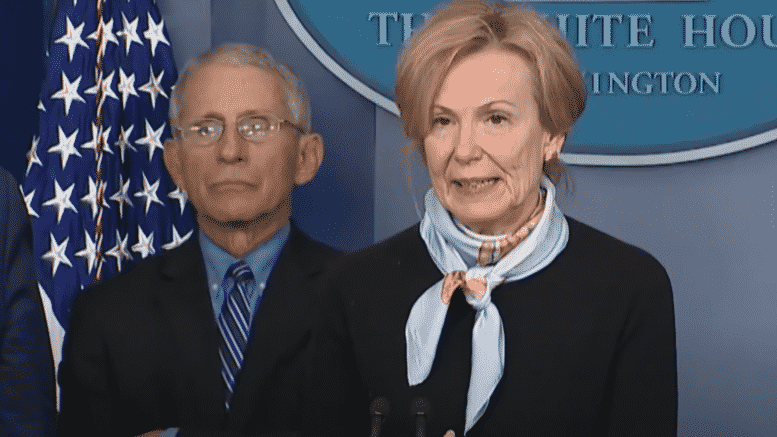 Please Share This Story!
PDF 📄
That Scientism and Populism are “evil twins of civic discourse that drive out the sober and deliberative judgments that can help a nation hold together and flourish” is almost an understatement.

Populist-based governments cannot exist without the form and function of Scientism, which posits that all truth is exclusively derived from science itself, excluding all other forms of knowledge and thought. Scientism provides the “absolute truth” and the means to enforce it.

It is a dangerous combination that will ultimately fall directly directly into the grip of Technocracy. Populists will say, “Wow, we never saw that coming.” ⁃ TN Editor

Many governors, particularly Democratic ones, have justified their states’ lockdowns with the common slogan, “We are following the science.” When Secretary of Health and Human Services Alex Azar barred the nation’s health agencies, including the Food and Drug Administration, from independently signing any new rules regarding vaccines, requiring instead his approval, some virus experts expressed concern that the politics would now get in the way of the science.

The mantra of “follow the science” is not unique to the politics of the virus. Politicians offer a similar justification for policies on climate change. Just as the science about Covid-19 “justifies” lockdowns, the science of climate change is used to support spending and regulatory policy that will deliver zero net emissions.

The idea of following science as opposed to politics is a trope that goes back to the beginning of the progressive era. In 1887 Woodrow Wilson, then a professor of political science at Bryn Mawr College, wrote a famous paper arguing that public administration could be separated from politics because it could follow a scientific logic rather than succumb to the corruption of politics. His ideas and similar ones became, in turn, a justification for an expanded administrative state. Within administration, experts would deliver regulations for the public good based on science. This “conveyor belt” model of administrative law in fact suggested that there needed to be fewer constitutional restraints on administrative agencies than on the legislature, because administrative agencies were constrained by science.

The conveyor belt model of administration has been largely abandoned even by most liberals. Experts do not always agree on the science. Moreover, the facts do not themselves dictate policy. Considerations of value are central to choosing policies, particularly when administrative agencies are given substantial delegated power from Congress. For instance, the FCC is to grant licenses to television stations in the public interest. But no set of facts can tell us what the public interest is. As a result of this recognition, administrative law was reformed by the Administrative Procedure Act to require more public input on rules and more searching review of the rules by the judiciary. Since Ronald Reagan, every president has also required major rules to be vetted centrally to make sure they are consistent with the overall political choices of the administration.

But the mantra of “follow the science” is even more problematic when applied to politics than administration. It is not possible to make politics subsidiary to science. First, the facts are open to dispute as are some of those about climate change, for instance. Second, no one set of facts is likely to dictate any result. Policies on climate change affect economic growth and that is another set of facts that must investigated. And as James Rogers has noted at this site, the radical uncertainty present in most judgments about human affairs requires prudential judgments, not just scientific modeling.

But most importantly, politics demands debate about values, not just facts. There are tradeoffs between different policies. The Green New Deal may hamper economic growth and thus harm generations to come. As a result, it may be wiser to adapt to a warming climate rather than try to prevent it at great cost. Moreover, it is a question of value, not fact, as to who should bear the burden of climate changes policies—this generation or future generations who, because of technological acceleration, may be substantially richer.

The conveyor belt view of politics is ultimately based on a philosophical fallacy. One cannot derive “ought statements” from “is statements.” David Hume demonstrated this point centuries ago. That recognition is not to devalue science. Using science to assess the likely costs and benefits of policies with the benefit of science helps us make better tradeoffs, whatever values we embrace. But it cannot replace debates among different values or determine the appropriate tradeoffs between them.

If the conveyor belt of science dictating politics has fallen out of favor in administrative law and is even more obviously inapplicable to politics in general, why are so many politicians returning to its rhetoric? The reason is that, even if it is an intellectually bankrupt tradition, it remains politically useful. Scientism is an attempt to shut down political debates.  It shifts the discussion from questions of value, which are accessible to all, to questions of facts which are in the domain of the experts, thus shifting the terrain of the debate. It also hampers the evolution of expert consensus, because when science becomes a front for politics, dissenting from the party lines becomes harder even for experts. And it allows progressives to portray their opponents as ignorant. That has been a common trope of progressive politics: conservatives are the stupid party.

But hiding behind science is bad for policy and worse for the civic health of the nation. The lockdown is a case in point. It is simply not the case that the facts about the transmission of the virus are sufficient to justify a lockdown by themselves. A policy of lockdown may help prevent transmissions and some deaths. But it also exacts huge costs to the economy, to our cultural life, and indeed to the mental well-being of Americans. Both lower growth and diminished mental health result in deaths as well as other harms. It may well be that the lockdown has been a contributing factor to the riots that have swept many cities across the nation. That is not to say that any particular lockdown is not justified. But enforcing a lockdown is not a decision that can be based on science alone. Instead, it requires prudential judgments of the sort that we elect leaders to make. As this essay was being written, the World Health Organization announced that lockdowns should not be the primary method of controlling the virus. This change of position highlights the dangers of hitching public policy to claims about contestable science.