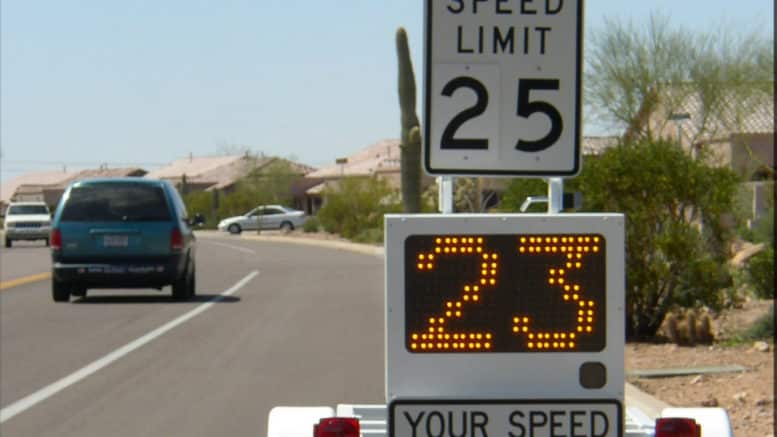 Please Share This Story!
PDF 📄
Technocrat engineers just won’t let surveillance drop, no matter how much resistance is applied. Sneaking in license plate readers to speed signs is deceptive and unconstitutional. While the claim is always made that “we won’t use the data for other purposes”, everyone knows that is impossible; once data exists anywhere, Technocrat data scientists harvest it without reservation. ⁃ TN Editor

The next time you drive past one of those road signs with a digital readout showing how fast you’re going, don’t simply assume it’s there to remind you not to speed. It may actually be capturing your license plate data.

According to recently released US federal contracting data, the Drug Enforcement Administration will be expanding the footprint of its nationwide surveillance network with the purchase of “multiple” trailer-mounted speed displays “to be retrofitted as mobile LPR [License Plate Reader] platforms.” The DEA is buying them from RU2 Systems Inc., a private Mesa, Arizona company. How much it’s spending on the signs has been redacted.

Two other, apparently related contracts, show that the DEA has hired a small machine shop in California, and another in Virginia, to conceal the readers within the signs. An RU2 representative said the company providing the LPR devices themselves is a Canadian firm called Genetec.

The DEA launched its National License Plate Reader Program in 2008; it was publicly revealed for the first time during a congressional hearing four years after that. The DEA’s most recent budget describesthe program as “a federation of independent federal, state, local, and tribal law enforcement license plate readers linked into a cooperative system, designed to enhance the ability of law enforcement agencies to interdict drug traffickers, money launderers or other criminal activities on high drug and money trafficking corridors and other public roadways throughout the U.S.,” primarily along the southwest border region, and the country’s northeast and southeast corridors.

“There used to be an old police saying, ‘If you robbed a bank, please drive carefully,’” former NYPD Detective Sergeant and Bronx Cold Case Squad commander Joseph Giacalone told Quartz, explaining that if a getaway driver didn’t do anything to attract the attention of police and get pulled over, they usually had a half-decent chance of fleeing. “But that’s no longer in effect because you can drive slow, you can stop at every red light, but these license plate readers and surveillance cameras track your every movement.”

And therein lies the real issue: What is a game-changing crime-fighting tool to some, is a privacy overreach of near-existential proportion to others. License plate readers, which can capture somewhere in the neighborhood of 2,000 plates a minute, cast an astonishingly wide net that has made it far easier for cops to catch serious criminals. On the other hand, the indiscriminate nature of the real-time collection, along with the fact that it is then stored by authorities for later data mining is highly alarming to privacy advocates.

“License plate readers are inherently a form of mass surveillance,” investigative researcher Dave Maass of the nonprofit Electronic Frontier Foundation told Quartz. “You look at something like a wiretap and most of the time it’s looking for a specific person and capturing specific conversations with that person. But here they are collecting information on everybody, not all of whom have been accused of a crime, in case they may one day commit a crime. This is un-American.”

The DEA does not release how much of the data it collects is connected to crimes. The nonprofit American Civil Liberties Union of Maryland found that only 47 out of every 1 million plates scanned by police in the state, or 0.005%, were linked to a serious crime. The Atlanta PD captured data from 128.5 million license plates last year; 786,580 of those—0.6%—were suspected of having a connection to a crime. Of 22 million license plates recorded in Austin, Texas during that same period, 3,200 of them—0.01%—were linked to alleged criminal activity.

Still, it’s not the data collection itself that’s the issue, as much as what authorities do next with that information, explained Maass.

“The technology is fairly simple, but as they start collecting more and more data and applying more and more algorithms to that, you can get information about people’s travel patterns, where their doctor’s office is, where they sleep at night, or put in the address of a place and see who visited it: an immigrant health clinic, a medical marijuana facility, or even a [marijuana] grow [operation] that would be completely legal under state law but illegal under federal law,” Maass said. “You could [link someone to] an abortion clinic, any number of sensitive locations.”

They are using one on Interstate 20 about 90 minutes east of Dallas. It’s operated by the Smith County Sheriff. It is trailer mounted, so it will move.